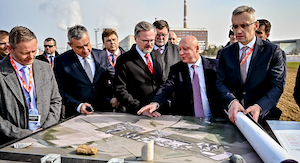 Elektrárna Dukovany II (EDU II), a wholly-owned subsidiary of Czech power company CEZ, has launched a tender for the construction of a new unit at the Dukovany nuclear power plant.

The Czech Ministry of Industry and Trade gave its approval for this step after the safety units assessed the documents from the previous phase (the incorporation of safety requirements into the tender documentation) and completed the safety assessment of all three bidders.

According to the tender schedule, the bidders must submit their initial bids by the end of November and will then have 20 months to prepare their final bids, having already received the preliminary tender documents more than six months ago. After that, the bids will be evaluated by CEZ and the evaluation report will be submitted for state approval. The contracts will be finalised in 2024.

"The main objective is a safe and economical project completed within the stipulated budget and time. For the tender itself, the goal is of course to select the best contractor and to have a quality and beneficial contract. After its signing, the project documentation will be thoroughly prepared in order to minimise the problems surrounding some foreign projects. I believe that the 2036 start date for test operation of the new unit is achievable," said CEZ Chairman of the Board of Directors and CEO Daniel Beneš.

Simultaneously with the tender procedure, EDU II is working on further project preparations. After the Ministry of the Environment issued a positive opinion on the Environmental Impact Assessment (EIA) in 2019, it also received a Location Permit from the State Office for Nuclear Safety last year and a Generating Facility Authorisation from the Ministry of Industry and Trade. The planning procedure, which EDU II applied to the Construction Authority for on 1 June 2021, is currently under way, CEZ noted.

The new Dukovany unit will be built next to the existing power plant and will replace part of the current power plant's output in the future.

The Czech Republic operates six commercial nuclear power units – four Soviet-built VVER-440s at the Dukovany and two Russian VVER-1000 units at the Temelin NPP, which together provided about 35% of total electricity production. The Dukovany units, which were commissioned in 1985-1987, will be decommissioned no later than 2045-2047.

Photo: On 17 March CEZ, or its wholly-owned subsidiary Elektrárna Dukovany II, launched a tender for the construction of a new nuclear power plant in Dukovany (Credit: CEZ)