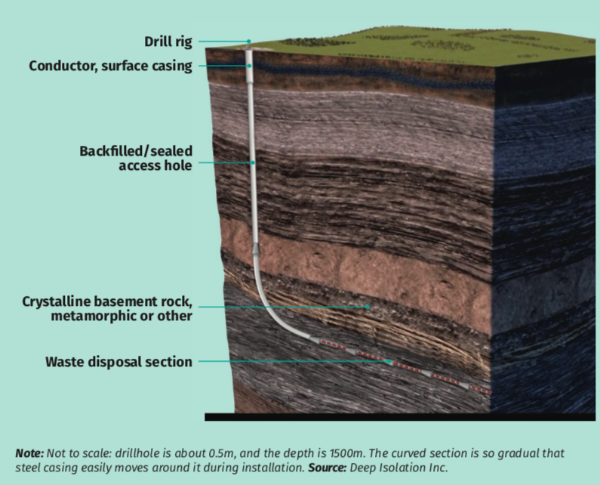 The preliminary study found no fundamental geologic limitations to disposing of nuclear waste in deep horizontal boreholes and that a wide range of locations could be demonstrated to comply with IAEA Safety Regulations for geologic disposal.

The study is a qualitative geological assessment of Estonia’s crystalline basement rock that evaluates geological conditions and potential risk factors for Estonia’s 15 counties, screening their potential for hosting a deep borehole repository. Such a repository would isolate radioactive elements from the Earth’s surface for 1.3 million years. At that point, any elements that might reach the surface would be three orders of magnitude below levels deemed safe and allowable by international safety standards, Deep Isolation said.

Estonia aims to reduce carbon emissions by 70% by 2030, and advanced nuclear power generation from small modular reactors (SMRs) could contribute to its carbon-neutral future. However, the unresolved issue of how to permanently dispose of used nuclear fuel is a major obstacle to deploying nuclear energy worldwide.

“If we are to be successful in our efforts to see Estonia become the first European Union country to deploy an SMR in the 2030s, it is important that we take responsibility now in planning for used fuel disposal,” said Kalev Kallemets, CEO of Fermi Energia. “This Deep Isolation study indicates that a deep borehole disposal repository could meet all prerequisites and be safe and cost-effective as well as easily deployed and scalable.”

As Estonia is considering the use of a new generation of SMRs to decarbonise the energy of the future, both policy makers and all Estonians need reassurance that there is a safe and affordable way to dispose of spent nuclear fuel, said Chris Parker, Head of Deep Isolation Europe and Middle East. "This is an important step to confirm that almost all regions of Estonia, especially in Northern Estonia, are geologically suitable for deep well disposal."

Deep Isolation noted that there are about 50 SMR designs and concepts being developed globally, according to the International Atomic Energy Agency. It is partnering with the advanced nuclear sector to explore the important role that borehole disposal can play. For example, a recent study published by the Electric Power Research Institute (EPRI) showed that locating a deep borehole repository at the site of a hypothetical advanced reactor in the southeastern USA could be both safe and cost-effective. Fermi Energia is the first European company to contract with Deep Isolation for a preliminary geologic study to manage advanced reactor waste.

“We applaud Fermi Energia for doing the right thing by planning for disposal of the nuclear waste up front. This is a significant step forward in confirming that regions across Estonia, in particular along the northern coast near a potential SMR site, could potentially safely host a borehole repository,” Parker said.

While countries such as Finland, Sweden and France are building mined repositories for nuclear waste, a deep horizontal borehole solution in Estonia would isolate the waste much deeper — at 1500 metres compared with about 500 metres, and it would be about a quarter of the cost, according to recent research on the US market undertaken by Deep Isolation in collaboration EPRI.

Deep boreholes are more quickly deployed, given that drilling can be done in weeks, while mining can take years and even decades.  As the geology near the potential Estonian SMR site appears suitable for disposal, the costs and risks of transporting waste long distances can be avoided. They would also be safer as no workers would be required underground.

The study was conducted in collaboration with Engineering Bureau Steiger, Estonia’s leading geologic and drilling company. Deep Isolation will present the results of this study as part of Fermi Energia’s one-day SMR conference, New Generation Nuclear Energy in Estonia, on 9 February.

(Read more from Deep Isolation about how methods for confirming the stagnation of underground waters over hundreds of thousands of years could help determine suitable sites for borehole disposal of radioactive waste.).