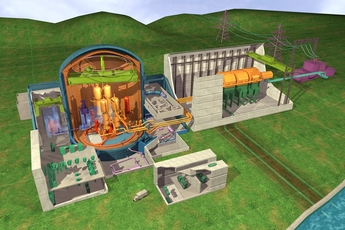 The UK nuclear regulator and the UK Environment Agency has finally fully approved the AREVA/EDF EPR design, a year after publishing an interim approval.

The approval makes EDF’s plans to build an EPR at Hinkley Point, Somerset, a step closer, and means that design elements approved during this process will not be reopened during the mandatory site-specific licence review, which is still to come.

The approval is also significant because it is the first to make it through the UK’s new generic design assessment procedure, which kicked off in 2007 tk with the EPR, and also the GE-Hitachi ABWR, Candu ACR-1000, and Westinghouse AP1000. The first two were cancelled in early stages; the latter was suspended later on after receiving interim approval, and remains on hold waiting for a customer.

The UK regulator said that moving from interim to final approval for the EPR cost £7.5 million, about a quarter of the estimated £32 million the regulator spent, and charged back to the utilities. It involved solving 31 technical issues. The first issue was closed on 28 March 2012 and the last was closed on 7 December 2012. The regulator said that a ‘significant number’ of design changes were incorporated into the generic design as a result of resolving these technical issues.

The EPR reactor design approved is based on a 2008 design reference, which was updated in December 2012 with 82 design changes.

“We are now content that the current UK EPR(TM) generic reactor design and safety case have demonstrated that the risks to workers and the public are as low as reasonably practicable (ALARP), for this stage in the design process,” the regulator said.

It added: “During the site-specific detailed design and construction phase we will regulate the further detailed development of the identified design changes, and there will be the opportunity for checking that risks have been reduced ALARP as the detailed design progresses, and as the assessment findings are addressed.”

Detailed reports of the assessment of each issue have not yet been published on the regulator’s web site, but the regulator said it plans to publish them by March 2013.

EDF Energy chief executive Vincent de Rivaz said that the approval “represents four years of hard work and allows our project have a stable design before we start, offering a huge boost for the predictability of costs. It highlights our credibility and that of the EPR design, as well as demonstrating that the UK has a credible policy and regulatory framework in place.”

The energy utility is also currently working with the government on electricity market reforms that favour low-carbon energy sources such as renewables and nuclear energy.

A table of EPR reactor changes is below.