Eletronuclear signs a contract to resume construction of Angra 3 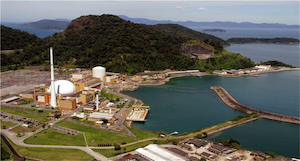 Brazil’s nuclear utility Eletronuclear (a subsidiary of Eletrobras) has signed a contract with the consortium formed by Ferreira Guedes, Matricial and ADtranz that will allow the resumption of work on unit 3 of the Angra nuclear power plant under the Critical Path Acceleration Plan.

Eletrobras announced the agreement through a notice to the market.

The chosen consortium was announced in July 2021. After completing the appeal stages, the three companies successfully underwent a compliance assessment. The signing of the contract was then approved by the Eletrobras Board of Directors   at the end of January.

Following the signing of the contract, the consortium will start mobilising the construction site in preparation for resuming construction of Angra 3. Among the main measures included in the Critical Path Acceleration Plan is completion of the concrete superstructure of the Angra 3 reactor building. In addition, an important part of the electro-mechanical assembly will be carried out, which includes closing the steel containment dome and installation of the used fuel pool, the polar bridge and the semi-gantry crane.

Subsequently, another tender will be held to hire the company or consortium that will complete the civil works and electro-mechanical assembly of the plant. This will be done through an engineering, procurement and construction (EPC) management ??contract.

Angra 3 will require another BRL17 billion ($3.2bn) to be completed. Some BRL 7-8 billion has already been invested in the project. The cost of the Critical Path Acceleration Plan is estimated at around BRL300 million. Completion of the work, which began in 1984 and was frozen six years ago, is scheduled for 2026, according to statements by Bento Albuquerque, Minister of Mines and Energy.

Angra 3 was planned in the 1980s but work stopped due to lack of finance. Construction resumed in 2010, but Eletronuclear faced a corruption scandal in 2015 and stopped paying contractors, including French company Areva, which was installing the Siemens-designed reactor technology now owned by Framatome.

Angra 3 is 67% complete and 80% of the nuclear reactor equipment has been bought and is being stored, costing Eletronuclear BRL25 million a year on upkeep and insurance for the construction site. This excludes interest payments on BRL10 billion in loans from national development bank BNDES to build Angra 3.

Currently, Brazil has two nuclear power plants in operation, both in Angra dos Reis, on the Costa Verde, in Rio de Janeiro. Angra 1 and Angra 2, a total of 1.9GWe, generate 1.1% of the energy of the Brazilian Interconnected System (SIN). Angra 3 will add 1.4GWe for a total of 3.3GWe, which will account for only 1.5% of Brazil’s total energy delivery capacity. Eletronuclear says Angra 3 will generate the equivalent of 50% of the consumption of the State of Rio de Janeiro.