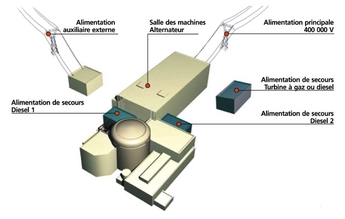 Each nuclear power plant has five diverse, permanently-available sources of electricity. This allows for the continuing operation of all equipment, including safety systems, even in case of failure of grid supply. Power is sourced from two high-voltage power lines and three back-up facilities. For 900MW reactors, there are three diesel generators. Plants with 1350MW and 1450MW reactors have two diesel generators and a combustion turbine. The three back-up sources of power must be permanently maintained as fit for purpose, so that they can in the event of failure of the two standard sources of power, supply the electricity needed to operate the safety systems.

The anomaly is caused by premature wear. EDF said that it is of no consequence to the operation and safety of the facilities in question. EDF declared that it would preventively replace the bushings in question. Maintenance procedures, which can be performed while the reactors are in operation, began on 12 February 2011.

Inspection revealed premature wear on a metal component known as a bearing bushing fitted to the diesel engines of the back-up generators equipping nuclear power stations. This premature wear is a deviation from nuclear safety rules. These require that electrical power supply components are fit for purpose at all times, including when not called upon for normal power station operations, as a result of inspections and regular maintenance. Hence, the discovered anomaly has prompted to reinforce the maintenance procedures on the diesel generators. Since 2009, these bearing bushings have been fitted to 26 diesel-fired generators in eight 900 MW nuclear power stations.