EDF has a good year in France, but is less positive about Anglo markets 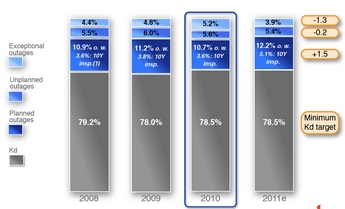 EDF has reported an increase in sales to EUR 65.1 billion, up from 59.1 billion in 2009, and an increase in profits (EBITDA) to EUR 16.6 billion for the full 2010 year. The contributions of nuclear power generation in 2010 to its success were largely positive.

EDF's plans for 2011 include an increase in planned maintenance. 10Y=Statutory 10-year inspection. 'o.w.'=of which

On the negative side, in France the debt relative to operating activities grew: sales from generation didn't cover 'all industrial and financial requirements,' it said. In addition, the unplanned Sizewell B outage due to a pressuriser leak cost the company profits of approximately EUR 180 million. UK output from subsidiary British Energy was 48 TWh, compared to 55 TWh in 2009.

In 2010, several large-scale power market developments have changed the company's financial makeup. It has begun plans to reduce its debt by a 'drastic' amount of EUR 20 billion (to less than EUR 30 billion, after a pending transaction goes through). First, it decided in late December to sell off its 45% share of German nuclear utility EnBW to German provincial government of Baden-Wuerttemburg for about EUR 5 billion, out of concern about planned changes to the structure of the utility, and concerns about the German regulations and the future of the market. It also reduced its debt by selling off its UK transmission and distribution network for EUR 3.7 billion, and reduced its control of wholly-owned French t&d business RTE.

Second, its nuclear business in the USA has taken a beating. After nuclear new-build joint-venture partner Constellation Energy pulled out of an application for a US loan guarantee for a proposed EPR at the Calvert Cliffs site, EDF bought Constellation's 50% share in the JV company UniStar for about EUR 140 million. However, it has also had to pay ten times as much (EUR 1.04 billion) for a one-off risk provision because of "major ongoing doubt on medium-term prospects of energy markets" there. Elsewhere, it said that electricity prices are likely to continue to suffer in the USA in the long run due to the expansion of unconventional gas production. It paid out another EUR 1.9 billion for risk in Italy and other 'mainly European' markets, and in French scheme (TaRTAM) that opens up its nuclear electricity monopoly to other utilities.

The company continues to spend on nuclear new-build and ongoing maintenance of nuclear power plants. It spent EUR 1.13 billion on new-build, EUR 839 million of which was in France. At the end of 2010, engineering work was 70% at the Flamanville 3 plant currently under construction; milestones include the completion of the discharge tunnel, resolution of steel reinforcement and concrete liner difficulties, startup of nuclear island electromechanical facilities and 'good progress' in the machine room. Commercial operation is now forecast for 2014. Total construction costs are estimated at EUR 5 billion. It also paid EUR 213 million for its stake in a joint venture project to build the two-unit EPR power plant in Taishan, China with CGNPC.

EDF also spent EUR 1.96 billion on nuclear fleet maintenance (EUR 1.64 billion of which was in France). The fleet is continuing with a large component replacement programme, and steam generator cleaning. The latter is expected to finish in 2011. In addition, there are plans to roll out new optimisation methods for the management of maintenance, and of work during outages.

In 2011, EDF's French fleet plans to maintain an availability factor of 78.5%. In terms of the other 21.5%, the share of planned outages is expected to increase by 1.5 points (to 12.2%), partly because of statutory 10-year inspections. It also plans to decrease the share of exceptional outages. It aims to produce between 408-415TWh of nuclear electricity.