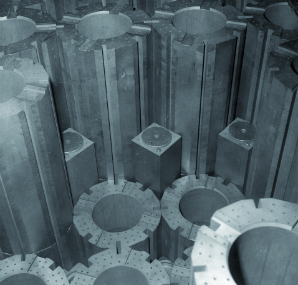 The operator of the UK's 14 advanced gas-cooled reactors has released information about the ageing of the graphite blocks in the reactor core, which roughly corresponds to about a 10% loss of weight over the fleet.

The UK's 14 advanced gas-cooled reactors consist of thousands of interconnected graphite blocks with circular channels for fuel and control rods. The graphite blocks slow down (moderate) neutrons generated in fission. Over time, the neutron flux eats away at the graphite, resulting in weight loss.

In June, the UK nuclear regulator approved a request by EDF Energy to increase the limit of graphite weight loss from 6.2% to 8%, according to a spokesperson for the Office for Nuclear Regulation. The approval came as part of a wider regulatory approval for reactor B1 to restart after a maintenance outage.

"We recognise the challenges presented by ageing of the Advanced Gas-cooled Reactor (AGR) fleet in the UK, and we continue to pay close attention to the problems associated with the graphite core of the reactors. We are satisfied that the reactors are safe to operate." the spokesperson said, adding, "if there is evidence to suggest that the limit of weight loss can be increased, and we are satisfied with the associated justification provided by the operator, we will agree to it."

Now, EDF Energy has published more information about graphite loss across the AGR fleet in response to an article in UK newspaper The Times, "Safety regulations could be relaxed to keep nuclear power stations open".

EDF Energy said that the differences in limits between stations reflects the difference in the design of the plant. The limits are approved during formal safety reviews which happen at least every three years.

It also said that it has a continuous programme of monitoring, sampling and modelling graphite behaviour in conjunction with academic institutions in the UK.

"We work continuously with scientists and UK universities to understand how materials in our nuclear reactors change over time and how that will affect the stations' operations. We regularly refine our own safety assessments as we uncover new information. All our findings and new research feed into mathematical models based on pessimistic assumptions, and maximum safety margins," said Brian Cowell, Director of Nuclear Operations, EDF Energy.

In addition to multiple back up safety systems on site, EDF Energy said it has also invested in further safety modifications at its nuclear plants to give enhanced protection for AGR reactors. For example, it has made modifications to gas plant control systems to improve reactor chemistry control.