EC confirms nuclear and gas as part of European taxonomy 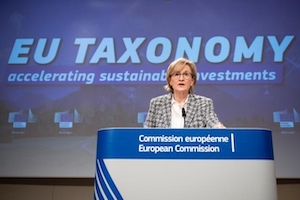 On 2 February, the European Commission (EC) approved in principle a Complementary Climate Delegated Act including, under strict conditions, specific nuclear and gas energy activities in the list of economic activities covered by the European Union (EU) taxonomy.

“The criteria for the specific gas and nuclear activities are in line with EU climate and environmental objectives and will help accelerating the shift from solid or liquid fossil fuels, including coal, towards a climate-neutral future,” the EC said. The Complementary Climate  Delegated Act will be formally adopted, once all languages are available, for scrutiny by co-legislators.

“A great deal of private investment is needed for the EU to become climate neutral by 2050,” the EC noted. “The EU Taxonomy aims to guide private investment to activities that are needed to achieve climate neutrality. The Taxonomy classification does not determine whether a certain technology will or will not be part of member state energy mixes. The objective is to step up the transition, by drawing on all possible solutions to help us reach our climate goals. Taking account of scientific advice and current technological progress, the Commission considers that there is a role for private investment in gas and nuclear activities in the transition.”

The gas and nuclear activities selected are in line with the EU's climate and environmental objectives “and will allow us to accelerate the shift from more polluting activities, such as coal generation, towards a climate-neutral future, mostly based on renewable energy sources,” it added.

The EC noted that the Complementary Delegated Act follows consultations with expert groups and feedback from the European Parliament.

The European Parliament and the Council will have four months to scrutinise the document, “and, should they find it necessary, to object to it”. Both institutions may request an additional two months.

The Council will have the right to object to it by reinforced qualified majority, which means that at least 72% of member states (at least 20 member states) representing at least 65% of the EU population are needed to object to the Delegated Act.

The European Parliament can object by a majority of its members voting against in plenary (at least 353 MEPs). “Once the scrutiny period is over and if neither of the co-legislators objects, the Complementary Delegated Act will enter into force and apply as of 1 January 2023.”

What is include in the Complementary Climate Delegated Act?

The Act comprises 20 articles which detail how nuclear and gas can qualify to be considered part of the taxonomy and explains limitations on their inclusion. Among other things, it says that technical screening criteria for nuclear energy related economic activities should ensure that no significant harm is done to other environmental objectives due to potential risks arising from the long-term storage and final disposal of nuclear waste.

It notes that accident-tolerant fuel has become available in the market and that “the use of that type of fuel should be set out as a requirement in the technical screening criteria". It says that, although Generation IV reactors are not yet commercially viable, technical screening criteria should be laid down for such reactors “in light of their potential contribution to the objective of  decarbonisation and minimisation of radioactive waste”.

As nuclear energy is part of the future energy sources in a number of member states alongside renewables, it will need safety upgrades to extend the operational life of ageing plants and replacement of obsolete installations. “Accordingly, significant investments in nuclear energy will be needed throughout the period until 2050 and beyond. It is necessary to ensure that new nuclear power plants use the most advanced solutions resulting from technological progress. The technical screening criteria for such new nuclear power plants should therefore provide for regular reviews of each investment project, and for technical parameters that correspond to the best-available technology in view of the outcomes of sustained research and development efforts and the continuous improvements of technologies.”

The Act notes that, in view of the long lead times for investments in new nuclear generation capacity, extending the service time of selected existing nuclear installations can support the decarbonisation of the energy system in the near to medium term. The technical screening criteria for such extensions should, however, require modifications and safety upgrades to ensure that those nuclear installations comply with the highest achievable safety standards.

“In the light of the expected technological and scientific developments, investments in the construction and safe operation of new nuclear installations using best available technologies …should be subject to technical screening criteria and to time-limits that will encourage the development and future use of Generation IV reactors with closed fuel cycle or fuel self-breeding once they become commercially available.”

The technical screening criteria related to climate change mitigation or climate change adaptation objectives should ensure that economic activities do not cause significant harm to any of the other environmental objectives. “Specifically for nuclear energy related economic activities, it is necessary to ensure that the long term disposal of waste does not cause significant and long-term harm to the environment…. It is therefore appropriate to set out in the technical screening criteria specific requirements for a radioactive waste management fund and a nuclear decommissioning fund, which can be combined, in line with the principle that waste generators should be responsible for the cost of managing it, and to require operational final disposal facilities for all radioactive waste, which should prevent any export of radioactive waste for disposal in third countries.”

EU Financial Services Commissioner Mairead McGuinness told a press conference on 2 February: “The Taxonomy helps signpost the way for private investment to contribute to our climate goals. The EU taxonomy is a tool to increase transparency in financial markets, so it is a tool for the financial sector, not energy policy.” She recalled that the first Delegated Act for the Taxonomy, which has been in force for a month, covered 170 economic activities, representing about 40% of EU listed companies, in sectors responsible for nearly 80% of direct greenhouse gas emissions in Europe.

She emphasised that the EU Taxonomy is not an energy policy instrument and that member states remain fully responsible for deciding their own energy mix. It is a voluntary tool that neither mandates nor prohibits investments in the sectors it covers. “It is a signpost for the private investment market on our road towards sustainability.”

She noted the need to move away from particularly harmful energy sources such as  coal and the need to act now with all the instruments available. The Complementary Delegated Act is about accelerating the move from high-carbon sources of energy to lower carbon sources. “Renewables are already included in the Taxonomy, following the adoption of the first delegated act. Today we are setting out how gas and nuclear could make a contribution in the difficult transition to climate neutrality. We are putting in place strict conditions for their inclusion in the taxonomy. They are subject to clear limits and phase-out periods. So on nuclear, the Delegated Act, if you like, rewards improvements and advanced technology in safety standards and waste management.”

European nuclear trade association Foratom welcomed welcomed the EC’s decision but noted that some of the criteria put forward for nuclear will prove very challenging to attain. “We remain disappointed that nuclear continues to be treated as a transitional technology. We firmly believe that it contributes to climate mitigation objectives and does not cause more harm than any other power-producing technology already considered as taxonomy compliant,” said Foratom Director General Yves Desbazeille.

As of 2025, existing and new build projects must use Accident-Tolerant Fuel, which has been certified and approved by the national regulator. “These criteria will prove very challenging, even if we respect that the goal is to push for continuous improvement,” he added. “For example, Accident-Tolerant Fuels are still in the testing phase and will thus not be commercially available (nor certified and approved) by 2025 making it impossible for projects to meet this criteria.”

This was echoed by World Nuclear Association, which said:

"Unfortunately, the Commission has only partially heeded this strong scientific evidence. Nuclear energy has been included in the taxonomy but only on a transitional basis, with expiry dates set for both existing reactors (2040) and new reactors (2045). The adopted CDA also sets criteria for eligibility that could limit the number of nuclear projects that qualify."

It added that the  requirement for all currently operating and new reactors to use 'accident tolerant fuel' by 2025, as well as arbitrary requirements for operational waste disposal facilities "go beyond existing national and European nuclear regulation and will be challenging, and in some cases impossible, to implement."