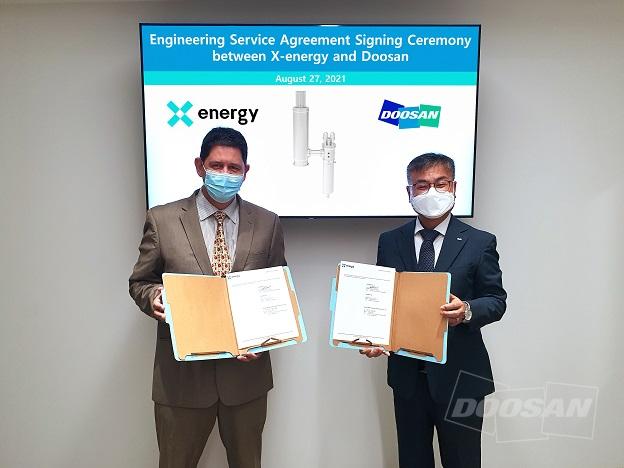 Doosan Heavy Industries & Construction said on 27 August it had won a contract with US X-energy to participate in the development of a high-temperature gas-cooled reactor (HTGR) that uses helium gas as a coolant instead of water.

Under an engineering service agreement, Doosan Heavy said it would support designing a small modular reactor (SMR) by performing a study for optimum design and conducting mock-up tests for critical manufacturing processes.

X-energy is developing the Xe-100, a HTGR with a generation capacity of 320MWe using tristructural isotropic (TRISO) particle fuel. Because TRISO enables a high-temperature output in advanced reactor designs, it could potentially boost the use of nuclear energy beyond electricity generation into energy sectors.

In October 2020, the U.S. Department of Energy (DOE) selected TerraPower and X-energy to each receive $80 million in initial federal funding under an advanced reactor demonstration programme. DOE will invest a total of $1.23 billion in X-energy’s project over seven years.

Doosan Heavy's nuclear business division head Na Ki-yong said that the deal with X-energy would help Doosan Heavy diversify its SMR business. In 2019, Doosan Heavy and South Korean investors made a $44 million equity investment in US NuScale Power, followed by an additional $60 million in July this year. Doosan Heavy will join the construction of NuScale's SMR and supply reactor modules for the power plant under development for Utah Associated Municipal Power Systems. Doosan Heavy received an order for a manufacturability review service from NuScale in 2019 and completed it in January 2021.