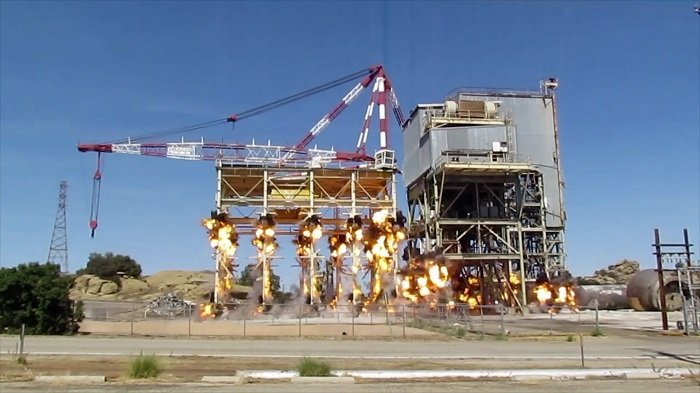 The US Department of Energy (DOE) has completed demolition of the final DOE-owned buildings at the Energy Technology Engineering Centre (ETEC) northwest of Los Angeles.

The final building to be torn down, with the assistance of shaped charges, was the Sodium Pump Test Facility (SPTF), which was used for testing large pumps for liquid sodium during site operations that ended in the late 1980s. SPTF, a nine-story industrial constructed in 1972, had a red-and-white crane structure on its roof that could be seen from various parts of Simi Valley. DOE said this was an important step in its clean-up activities at the Santa Susana Field Laboratory (SSFL).

“This accomplishment was the direct result of an ongoing and successful collaboration with the State of California. It builds on a new era at DOE’s Office of Environmental Management as we tackle ambitious priorities and continue to shrink the footprint of EM sites,” said EM Acting Assistant Secretary William “Ike” White.

Following a 2020 agreement with the State of California, DOE removed the 18 remaining DOE-owned buildings at the ETEC site, and all building materials and waste from the demolition will be removed from the site and disposed at a licensed facility outside the state. The completion of building demolition at ETEC fulfils an EM priority for 2021.

“The demolition of the ETEC buildings marks a significant step towards the DOE’s mission to clean up its former site at the SSFL,” said Josh Mengers, acting ETEC federal project director. “We will continue clean-up efforts, which are based upon years of scientific analysis and planning. Our highest priority is protecting human health and the environment to ensure the site remains safe for nearby communities.”

DOE worked cooperatively with the State of California Department of Toxic Substances Control (DTSC) to complete building demolition. All 18 buildings were demolished in just over 15 months, while maintaining compliance with health and safety guidelines during the ongoing COVID-19 pandemic. With this completion, more than 270 DOE-owned original structures have been demolished at ETEC since work began at the site.

DOE will now continue to work cooperatively with DTSC, shifting focus to groundwater and soils remediation to complete the clean-up in Area IV at SSFL. DOE conducted operations at the SSFL from the 1950s to the late 1980s; ETEC, established in the 1960s, served as a premier facility for liquid metals research in the USA.