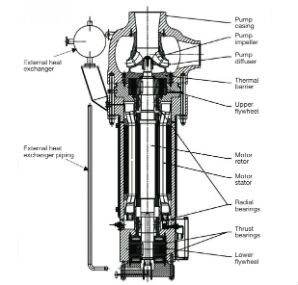 First of a kind engineering issues related to the reactor coolant pumps and squib valves for the Chinese AP1000 have been resolved, according to Westinghouse president and CEO, Danny Roderick.

Roderick said that there has been 'significant' progress on the reactor coolant pumps.

Solutions are being manufactured now that will support the current Sanmen 1 schedule for start up in December 2015, Roderick said. The design solutions were reviewed by the Chinese government and the nuclear regulator.

The pumps are expected to be swapped into the Chinese AP1000s over the next three to six months, according to Roderick.

Timothy Collier, Westinghouse vice president and managing director, China, said in an April 2014 press conference that the problem with the reactor coolant pumps, manufactured by Curtiss-Wright flow control in the USA, was a matter of assessing mechanical tolerances in the pumps. He said that it was not a major design issue, but more one of validation and verification: some pumps had passed factory tests, and others had not. He said that the effort to resolve the issue involves Westinghouse working with Curtiss-Wright, outside experts, Chinese owners and the Chinese regulator the NNSA.

The first pumps will be installed at Sanmen 1, followed by Haiyang 1, Sanmen 2 and Haiyang 2.

Roderick said that none of the other AP1000 projects would be impacted as they will simply use the new pump design.

More technical information about the pumps is available in a December 2012 article about them. Click here to read it.

Roderick also said that Westinghouse has completed a 'top to bottom review' of all the remaining engineering issues in China, and that it expects to have 'the last piece of paper' that is necessary for construction in China to be issued in September.

Westinghouse, which is currently building a 'demo' phase of four AP1000 units in China, two each at Sanmen and Haiyang, says it has continued to see 30% less manpower requirements on the second units at each of these sites. The company is also working on the next 'wave' of eight units in China and expects about a 50% producitity increase compared with the first two Chinese AP1000 units.