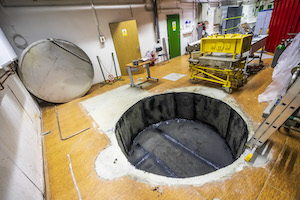 The Faculty of Nuclear Sciences and Physical Engineering (FNSPE) of the Czech Technical University (CTU) in Prague has received a permit from the State Office for Nuclear Safety (SÚJB) for the construction of the VR-2 nuclear reactor.

It will be located in the same reactor hall where the faculty has been operating the VR-1 Vrabec reactor since 1990. The number of operating nuclear reactors in the Czech Republic will then total ten   (not counting the Golem fusion reactor). In addition to the VR-1 and VR-2 reactors, there are two research reactors at the Research Centre in Rež and six nuclear power reactors operated by power company CEZ at its two NPPs in Temelin and Dukovany.

CTU Rector Vojtech Petrácek said the university’s research reactors are unique facilities which are used to train experts for   nuclear research. “It also helps us attract the interest of international students. We are one of the few universities in the world that operates both the fission nuclear reactor VR-1 Vrabec and the fusion nuclear reactor – the Golem tokamak. And now we are approaching the moment when we will have two fission reactors.

FNSPE dean Václav Cuba noted: "We have been preparing the construction of the school's second fission reactor since 2014. With the construction permit, we are now entering the final phase and we believe that, if all goes well, we will be able to start commissioning the new reactor at the end of this year."

According to Jan Rataj, Head of the Department of Nuclear Reactors at FNSPE, the new VR-2 reactor can be classified as a subcritical reactor, which allows for simpler reactor design and construction. "The new reactor is relatively small, so we can place it in the same reactor hall where we already have the school's VR-1 Sparrow reactor. We are thus using the existing infrastructure, not only the technical infrastructure, but also the downstream laboratories, classrooms and, of course, security and administrative support," he explained.

The steel reactor vessel in which the fission reaction will take place was manufactured by the Witkowitz Group for FNSPE. "We are very pleased to be involved in such innovative and unique products, in this case, moreover, for top-quality professional workplaces. This confirms our position as an experienced and established manufacturer of components for nuclear facilities," says Milan Mercl, Director of Vítkovice Energy Engineering of the Witkowitz Group. The faculty has had fuel for the new reactor ready in the reactor hall for four years. It arrived in Prague in 2018 from Aalto University in Finland.

The Department of Nuclear Reactors offers courses for its own students, as well as for students from other universities, foreign students and for employees of various companies and organications from the Czech Republic and abroad.   In 2020, in cooperation with the IAEA, the reactor hall was equipped with the Internet Reactor Laboratory system so that it could offer online teaching for those who cannot get to the Czech Republic. At the time of the pandemic, the system was first tested directly by FNSPE students. Today it is regularly used for teaching foreign students – for example from the USA, the UK, Tunisia and other countries.

Although the new reactor, like VR-1, will be used primarily for teaching, some research projects will also be carried out. Researchers at the VR-1 reactor focus mainly on reactor and neutron physics, nuclear safety and computational tools for nuclear reactor analysis. They also use it for non-destructive analysis of various samples.

Photo: Preparation for the construction of the VR-2 reactor (Photo: Czech Technical University in Prague)