Cracks found in graphite bricks at Hunterston within safety margins 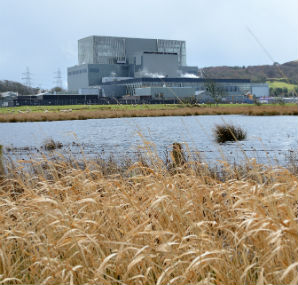 The discover of three cracked graphite bricks around the core of unit 3 at the UK's Hunterston B nuclear power plant has "no safety implications" and will not affect the operation of the reactor, according to operator EDF Energy.

Hunterston B began operating in 1976 and was originally scheduled to shut down in 2011, but this was extended to 2016. EDF later said a technical and economic evaluation of the plant confirmed it could operate until 2023.

The plant hosts two advanced gas-cooled reactors (AGRs) - units 3 and 4. The graphite core of each reactor comprises some 6000 graphite bricks, 3000 of which are the graphite bricks containing fuel channels. These are all connected together. "The structure is designed to contain many redundant bricks meaning a very large number of bricks would have to crack before there were any significant safety concerns," EDF Energy said.

The cracks were found during a planned maintenance inspection and EDF said they were predicted due to the age of the reactor. Planned statutory outages are carried out at each of the two reactors every three years. Two cracked bricks were found during maintenance of unit 4 in October last year. Unit 3's current outage started on 2 October and is expected to be completed by early December.

"Nuclear safety drives everything we do. This means we work within very large safety margins. This applies to graphite bricks too," said nuclear plant director Colin Weir. "The level of cracking, which is considered reasonable, is far below anything which would affect the reactor's safe operation. It is accepted by our regulators and materials experts that cracks will occur in some of the bricks and that the core will lose some of its mass as part of the normal ageing process. The observations were anticipated and are in line with our understanding, so our view of the best estimate lifetime planning date of 2023 has not changed."

Weir told World Nuclear News: "We don't need to replace cracked graphite bricks and in fact this wouldn't be possible. What we are focused on is monitoring and modelling the graphite to ensure the expected cracks remain well below a level which doesn't allow distortion of the core and hence continues to allow insertion of the control rods unimpeded."

EDF said: "This is known as keyway root cracking and was predicted to start happening at this point in the station's lifetime." Further inspections will look at more of the graphite core and, if further cracks are found, EDF said it will inform the public. EDF said it was publicising the information "as part of its commitment to openness and transparency". The company said it would always take any NPP out of service "long before an issue became unsafe, regardless of commercial considerations".

"Over time, graphite slowly loses weight as part of the normal ageing process. This is a well-known phenomenon which was fully considered as part of the stations' design and is factored into safety limits approved by the independent regulator, the Office for Nuclear Regulation (ONR)," EDF said. Graphite ageing is used to determine the lifespan of an AGR NPP.

Jim Reed, EDF Energy's graphite core safety case group head, said that a quarter-scale model of an AGR unit the company has built with the help of Bristol University, demonstrates that such a reactor can continue to operate normally and safely with cracks in up to 30% of the graphite bricks.