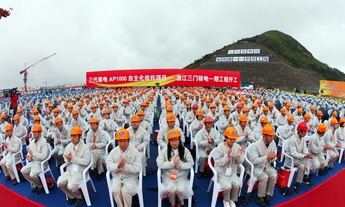 The world’s first AP1000 is now under construction in China. On 19 April, the first concrete was poured at the Sanmen site in southeast Zhejiang province where two of the 1100MW Westinghouse-designed reactors are to be built.

During a ceremony attended by over a thousand people, 5200 cubic meters of concrete was poured over 950 tons of reinforcing steel and 1000 anchor bolts. It will form the foundation for all of the nuclear island buildings, including the containment vessel and the shield building.

Under a contract signed in 2007, Westinghouse and its consortium partner the Shaw Group will be constructing two AP1000 reactors at Sanmen, and another two at Haiyang in Shandong province where construction is expected to start later this year. Unit 1 at Sanmen, is expected to come online in August 2013, with the second a year or so later.

China’s vice prime minister Li Keqiang said: “It is a new start of a magnificent project, enabling the third generation nuclear power technology with the main feature of passive technology into effective productivity.”

Another key feature of the AP1000 design is that it uses less concrete and steel and fewer components and systems, which reduces to installation, inspection and maintainence time.

Westinghouse President and CEO Aris Candris said: “The Peoples Republic of China is taking a leadership position in building infrastructure and developing a comprehensive energy strategy that will support economic growth in an environmentally acceptable manner.”

In addition to four plants in China, the Westinghouse-Shaw consortium has signed six engineering, procurement and construction contracts for plants in the USA at: the Vogtle site near Waynesboro, Georgia; the V.C. Summer site in Jenkinsville, South Carolina; and Progress Energy’s Levy County site in Florida.