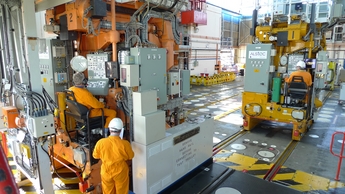 Defueling at Chapelcross is due to be completed by April 2012

Since defueling began in August 2009, 20% of the fuel elements (7178) have been removed from the four reactors at Chapelcross.Removal of all 38,075 fuel elements is due to be completed by April 2012.

Electric-operated tugs are being used to move flasks containing the spent fuel from the Chapelcross reactor chambers to flask handling bays. Flasks are then shipped to Sellafield. The system supplied by MasterMover has helped to reduce the risk of handling-related injuries.

To move a flask from the reactor chamber to the flask-handling bay at Chapelcross, the integrated flask and bogie first need to be guided along the track. The flask then has to be moved to a ‘flask holding area’ (still inside the same secure room) where the lid is torqued on the flask. Until the lid is securely in place, the flask cannot leave this area.

The problem for engineers at Chapelcross is a lack of space (just 3.5m2) in which to manoeuvre the flask and bogie in order to be able to secure the lid in place. The combined weight of the flask, spent fuel and bogie is more than 50 tonnes.

In July 2009, site operator Magnox North purchased two MT20/1500 pedestrian tugs to pull the nuclear flasks from the reactors to the flask handling bays. MasterMover designed a special coupling system between the MT20 and the flask bogie, which enables the machine to be connected and disconnected easily and safely.

Fuel route systems support engineer at Chapelcross Stephen Bennie says: “Prior to investing in the new MT20 tugs from MasterMover, we knew we needed some kind of electric-operated handling system to help us move the flasks around in such a tight space. We did consider the possibility of motorising the bogie system ourselves, but we decided that the cost and time to design, manufacture and install this type of system was prohibitive.”

Bennie says that safety has also been improved thanks to the new solution. “The braking on the MT20 means that the risk of an operator being accidentally crushed against a door whilst pulling the flask is now eliminated. Obviously, pushing the flask along the rails rather than pulling it has also helped to reduce this risk too.”