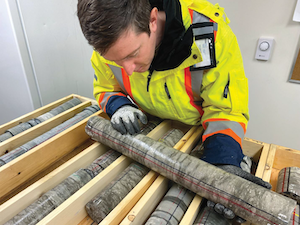 Some of Canada’s top geoscientists are leading the studies, in which approximately 8km of core samples were pulled from the bedrock at two Ontario sites under consideration for the project – one in the Wabigoon-Ignace area and the other in the Saugeen Ojibway Nation (SON)-South Bruce area.

“Deep geological repositories are internationally recognised as the safest way to manage used nuclear fuel over the very long term,” said Lise Morton, vice-president of site selection at the NWMO. “Completion of this drilling programme is a significant step forward in our geoscience work. In addition to informing the safety case for the project, the resulting data will also provide important insights to the communities that are considering hosting the project in their area.”

Canada’s plan calls for centralised containment and isolation of Canada’s used nuclear fuel in suitable rock formation in an area with informed and willing hosts. The community-driven siting process launched in 2010, and by 2012, 22 communities had expressed interest in learning about the project and exploring their potential to host it. The NWMO is on track to finalise site selection in 2023.

The completion of the last borehole at the potential site in the SON-South Bruce area follows work in the Wabigoon-Ignace area, which ended in November 2021 after five years of intensive field study that started in 2017. Borehole drilling and testing up to 1000m below the surface is part of the NWMO’s broader site investigation work to ensure the site will meet stringent regulatory requirements. Safety and security underpin the NWMO’s work, guided by a responsibility to protect people and the environment.

Canada’s plan for used nuclear fuel, known as Adaptive Phased Management, emerged through extensive dialogue with Canadians and Indigenous peoples from coast to coast to coast, and aligns with the values and priorities they identified as important.

The site selection process was designed to ensure the location chosen will be safe and secure, and we will only proceed with the support of informed and willing hosts.