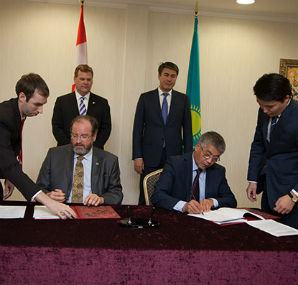 The world's top two uranium producing countries, Canada and Kazakhstan have agreed to cooperate in the peaceful use of nuclear energy.

The November agreement will enable Canadian firms to export and import controlled nuclear materials, equipment and technology to and from Kazakhstan under safeguards applied by the International Atomic Energy Agency. It will also facilitate the exploration of joint commercial ventures and research and development,

Canada also has "a full array of nuclear technology, equipment and services to offer to the growing nuclear energy market," according to Canada's ministry of foreign affairs.

"The signing of the Nuclear Cooperation Agreement demonstrates growing bilateral relations between Canada and Kazakhstan, and marks our shared commitment to expanding cooperation in the nuclear sector in a safe and secure manner," said Canadian foreign affairs minister John Baird.

"This agreement will provide an opportunity for our countries to work together," said Joe Oliver, Canada's Minister of Natural Resources. "It will provide access for members of Canada's nuclear industry to Kazakhstan's expanding nuclear market and facilitate the exploration of joint commercial ventures and research and development."