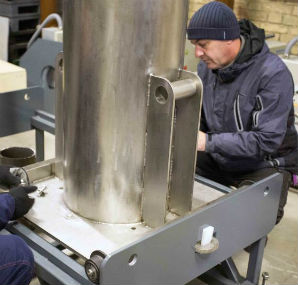 The International Atomic Energy Agency (IAEA) has announced that successful tests of a "promising technology" for moving and storing low-level radioactive sealed sources involving borehole disposal. The proof of concept for the technology was tested in Croatia at the end of 2015 without the use of radioactive material, the IAEA said on 11 January.

Equipment tests conducted by IAEA engineers and a Croatian radiation protection company confirm the feasibility of a system used to safely move and insert low activity sources as part of borehole disposal. The technology, developed for disused sources with low levels of radioactivity, relies on a robust metal platform and a mobile container called a transfer cask, which is used to move the sources into the borehole safely.

Sealed radioactive sources are stored temporarily In most developing countries, while some developed countries have disposal facilities close to the surface. Both pose a security risk if they are not sufficiently protected, the IAEA said, adding that the new disposal method represents a "long-term solution to this problem that will ultimately help protect people and the environment"

Once the borehole is in place, the conditioned sources will be loaded into a specially-designed canister, or disposal package, which is then sealed. The sealed canister will then be placed inside the transfer cask and moved over - and eventually into - the borehole. Janos Balla, a waste technology engineer at the IAEA, added that the technology is "simple, affordable and can be deployed worldwide". Disused sources remain radioactive, and "we want to limit the probability of these being reached and used for terrorist activities", said IAEA nuclear security officer Gert Liebenberg.

The original borehole idea was developed by the South African Nuclear Energy Corporation (Necsa), and adapted by the IAEA to incorporate disposal of sources with higher levels of radioactivity. Today, borehole technical preparations and safety assessments are taking place in several countries, including Malaysia and the Philippines, for implemented in the coming years.

Last week, the US Department of Energy announced it had selected a team led by Battelle Memorial Institute to drill a 4880m test borehole into a crystalline basement rock formation in North Dakota as part of studies into the feasibility of using boreholes for nuclear waste disposal. US Energy Secretary Ernest Moniz said that the project was an "important first step to increasing our scientific understanding of the potential uses for crystalline rock formations including the feasibility of boreholes as an option for long-term nuclear waste disposal."