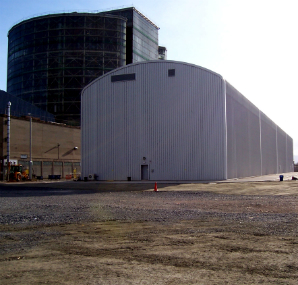 Balfour Beatty will be responsible for the final design of the encapsulation process and construction of the SILWE plant including the complex mechanical, electrical control and instrumentation required.

The twin-reactor site was Scotland's first civil nuclear generating station and at the time of opening in 1964 was the largest in operation in the world. While the plant was active, and since it ceased operation in 1989, the solid intermediate level waste has been stored in bunkers. On completion of the SILWE facility, the Solid Active Waste Bunker Retrieval (SAWBR) facility will retrieve waste from the bunkers and place it in stainless steel boxes which will then be taken to the SILWE building for encapsulation before being transported to the Intermediate Level Waste (ILW) store for storage for potentially the next 100 years.

Doug Price, Magnox Head of Commercial Delivery, said: "At Hunterston A we are in the care and maintenance preparations phase which focuses on deplanting buildings and retrieving, treating and processing waste."

Hector MacAulay, Balfour Beatty Delivery Unit Managing Director said that Balfour Beatty has over the years been involved in the successful completion of many projects at Hunterston A, including the ILW store.

The works will be carried out under the existing Infrastructure, Construction and Enablers (ICE) framework for the delivery of construction, infrastructure and maintenance projects across all 10 sites operated by Magnox on behalf of the Nuclear Decommissioning Authority. Balfour Beatty was appointed to ICE in September 2012. This will be the fourth package order issued to the company under the framework.

Work is expected to start on site this month and to be completed by the first quarter of 2017.