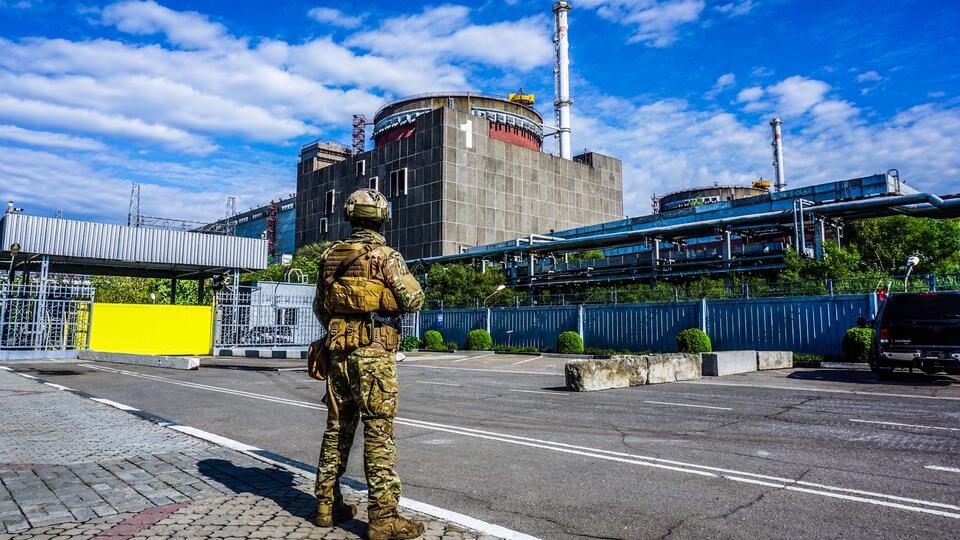 Ukrainian engineers have managed to restore back-up power to the Zaporizhzhia Nuclear Power Plant (ZNPP), a much-needed development after the plant lost all access to external electricity twice over the past week, Director General Rafael Mariano Grossi of the International Atomic Energy Agency (IAEA) said on 14 October.

The availability of back-up off-site electricity through the switchyard of the nearby thermal power station provides Europe’s largest nuclear power plant with a buffer if the connection to its last remaining operating 750 kilovolt (kV) power line were to be cut again, he said.

When the ZNPP’s connection to the high-voltage line was temporarily cut on 8 October and again on 12 October due to damage caused by shelling, the plant had to rely on its emergency diesel generators for electricity until the line was restored. In recent days, two of the ZNPP’s back-up power lines – connecting it to the thermal power plant switchyards – have been repaired, the IAEA team at the site reported to Agency headquarters. Today, one of the 330 kV external lines connecting the switchyard of the thermal power plant to the grid was also restored, enabling the plant to receive electricity that way, if needed.

“Working in very challenging conditions, operating staff at the Zaporizhzhia Nuclear Power Plant are doing everything they can to bolster its fragile off-site power situation. Restoring the back-up power connection is a positive step in this regard, even though the overall nuclear safety and security situation remains precarious,” Grossi said.

Before the conflict, the ZNPP had access to the grid through four high-voltage power lines, but three of them have fallen victim to shelling. The back-up power lines – offering indirect access to the electricity grid – had also been down in recent weeks. A secure off-site power supply from the grid is essential for ensuring nuclear safety, also with the six reactors in a shutdown mode. This requirement is among the seven indispensable nuclear safety and security pillars that Grossi outlined at the beginning of the conflict.

The IAEA team also said further preparatory activities to restart reactor unit 5 were continuing, and that work to also restart unit 6 was expected to get under way tomorrow. Restart will take a number of days.

Separately, the ZNPP has received additional fuel supplies for its 20 diesel generators, following the arrival of seven trucks, of which five recently came from the city of Zaporizhzhia, and two earlier from Russian-controlled territory, the IAEA team said. The plant currently has fuel for at least ten days operation of diesel should external power be lost.

Director General Grossi has in recent weeks engaged in high-level consultations with Ukraine and Russia aimed at agreeing and implementing a nuclear safety and security protection zone around the ZNPP as soon as possible, stressing it is urgently needed to help prevent a nuclear accident. The consultations are progressing.

On 14 October, Grossi tweeted: “Arriving in Poland on the night train from #Ukraine after an intensive week of consultations with Russia & Ukraine. Moving closer to the establishment of a protection zone for #Zaporizhzhya Nuclear Power Plant — the plant's situation is untenable and we need immediate action to protect it.”

Meanwhile, the Head of the plant operators’ town of Energodar, Alexander Volga, said on 14 October that ZNPP now operates according to Russian standards. He added that ZNPP had become a part of the Russian company Rosenergoatom and now come under the jurisdiction of the Russian Federation. Volga added that salaries would now be paid by Russia and not by Energoatom. Earlier, Rosenergoatom CEO Renat Karchaa said that ZNPP will also eventually switch back to using Russian fuel rather than fuel supplied by Westinghouse.

This followed the formal annexation of Zaporozhye region by Russia following a referendum in the territory that supported the development with a large majority. However, the US, Europe and Ukraine refuse to recognise the result of the referendum and Ukraine’s Energoatom continues to claim ownership of the plant. Grossi has also made clear that the IAEA cannot recognise Russia’s annexation.

On 14 October, a team from 5-TV.ru produced a report after filming inside ZNPP. "We are the first film crew to work inside the station, directly in the engine room. And we can see that nothing is mined here. There is no military equipment or weapons either. Only employees work, " Izvestia correspondent Mary Badunts reported. However, the report noted: “Entering the checkpoint of the enterprise, you can immediately notice that an important infrastructural object is under heavy protection of the military and Rosgvardiya.”

Image: A Russian serviceman stands guard at the Zaporizhzhia NPP in territory now under Russian control (courtesy of AP Photos)