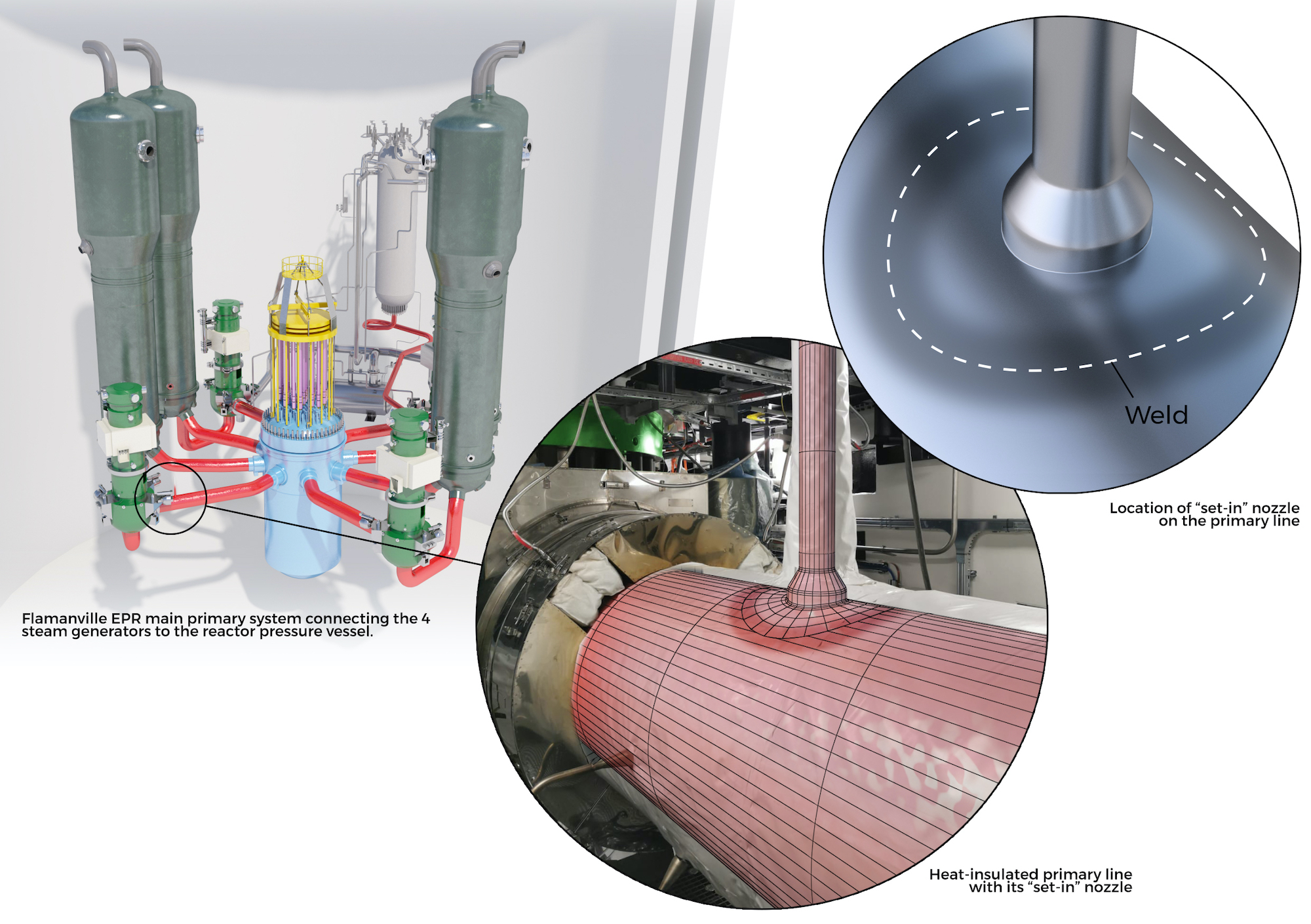 France's Autorité de Sûreté Nucléaire (ASN) has approved EDF's proposed solution for rectifying a design fault on three nozzles in the main primary system of the EPR reactor at unit 3 of the Flamanville nuclear power plant.

EDF's proposal was detailed in a letter published on 20 October, but dated 8 October. It proposes to install a retaining collar around each of the concerned connections is not expected to delay the planned startup of the unit in late-2022.

In March, EDF had notified ASN of a design deviation on the three nozzles, which were produced in 2011 based on a 2006 design file. The solution proposed by EDF consists in installing a retaining collar around each connection concerned. This collar aims, in the event of rupture of the weld for implantation of the tapping, to limit the size of the breach which would result therefrom. The consequences of this breach would then be covered by current reactor safety studies.

ASN said it “considers that the solution proposed by EDF is acceptable in principle” but “will give a final decision when EDF has provided the expected information concerning the demonstration of the device's efficiency, the design, manufacturing and operating requirements applicable to the clamps and the quality of the installation welds around which these clamps will be mounted”.

In 2006, EDF and Framatome changed the design of these three nozzles to make it easier to inspect the "set-in" weld on the main pipe. This increased the diameter of this weld which meant that the break size to be considered in the event of rupture of this weld would exceed that specified in the safety studies.

The design fault was identified by EDF and Framatome in 2013, after the pipes had been manufactured, and in 2014, EDF decided to tackle the problem by extending to these welds the break preclusion approach applied to the main primary system pipes. This approach, which had been implemented by EDF on certain pipes of the Flamanville EPR reactor, comprises reinforcing the design, manufacturing and in-service monitoring requirements, in order to ensure the highly improbable nature of any break in this equipment, "thus obviating the need to study all the consequences of a break in the installation's safety case".

At the request of ASN, EDF in June submitted its strategy to deal with the anomaly, choosing a "rupture exclusion" approach, which requires installing a retaining collar around each of the three connections. In the event of rupture of the weld around the nozzle, the collar would limit the size of the resulting breach, which would then be covered by current reactor safety studies.

ASN said EDF’s file must detail the consequences of adding retaining collars on internal stress studies and identify the potential failures of a retaining collar. “It will specify the failures studied in the safety demonstration as well as their consequences, and must justify, if applicable, failures that would not have been retained.”

ASN adds: “Given the role of the retaining collar device in the safety demonstration, your file must justify the design margins and the manufacturing quality of the retaining collars. It will have to also justify the maintenance and in-service control requirements, as well as the provisions taken with regard to potential non-maintenance qualities, in particular with regard to risk of improper fitting of a clamp and damage to the pipes.”

The Flammanville EPR project is 11 years behind schedule and its original €3.3bn budget has increased to €12.4bn although a report by auditors in 2020 said it could cost €19.1bn to complete. EDF CEO Jean-Bernard Levy said in February that construction should be completed in 2023 as scheduled, despite a “strained” timetable due to the coronavirus crisis. “I maintain that construction of Flamanville 3 will be finished at the end of next year and we will see fuel loading in the last few days or weeks of 2022,” he told a parliamentary committee.