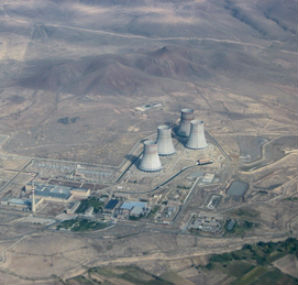 Life extension of unit 2 at the Armenian nuclear power plant in Metsamor will be carried out in phases to reduce shutdown time, according to Yervand Zakharyan, Armenia's minister for energy and natural resources. The unit will be closed for a total of 6-7 months during the upgrading period. This will include three months in 2017 and three or four months in 2018, Zakharyan said, adding that Armenian-2 will operate until 2027.

"If a further life extension is possible, we'll examine the issue", he noted. The design service life of unit 2 expires in September 2016.
An acceptance certificate was signed on 7 October for work to examine the systems, structures and components at unit 2 as part of the life extension preparation programme. A contract between Russia's JSC Rusatom Service and JSC Armenian NPP for the execution of works, provision of services and supply of goods for the life extension was signed in June.

To date, Armenia has produced 22 reports on the integrated examination of the plant's systems, structures and components, Sergey Kiriyenko, director general of Russian state nuclear corporation Rosatom said. By the end of the year 15 more documents will be delivered, a total of over 4500 units of equipment would be examined and more than 10,000 documents would be prepared covering the activities, he added.

When the upgrading is completed, unit 2 (a VVER-440 reactor) will have its power increased by 15-18%. Gera Serikyan, deputy director of Armenian NPP and head of the service life extension project, said the turbine efficiency would be increased as a result of modernization of the turbine hall equipment. He noted that the design power of unit 2 was 407MWe, but operating power was limited to 98% of the design value for safety reasons after its restart in 1995 (the plant was shut down in December 1988 in the wake of the earthquake in Spitak). "The plant operates at 380 MWe now," Serikyan said. "After the modernization, we hope to reach 435-440MWe," he added.

A tender for modernisation of the turbine hall will be announced early next year, he said.

“This year we expect to complete the tender preparatory procedures, determine the initial maximum price and approve the technical assignment. We'll announce the tender early next year and it will take 40 days to conduct it." "We plan to use longer turbine blades, to change the shaft arrangement and to replace the high-pressure cylinder and the condensers", he explained.

This year's finance for the life extension project will amount to $7m, Kiriyenko told journalists in Yerevan. Work totalling $2m has already been performed as part of phase 1", he said, adding that Rusia had given Armenia a preferential credit of $270m and a free grant of $30m for the project. However, the exact cost of the project has not been yet determined. "We have no target to spend all $300m, on the contrary, we are going to spend these funds sparingly and carefully", Kiriyenko said, having explained that the cost would depend on the amount of components that require replacement or upgrading.

Armenia is still considering construction of a new nuclear unit, energy minister Zakharyan said, although plans have been delayed in the wake of the Fukushima accident. The life extension project means there is now more time to consider the best way to approach this. Construction of a new unit is a "costly and responsible process", Zakharyan stressed. He also said that, if a decision was made to build a new NPP, medium power designs of 600MWe would be the preferred option.

Also in early October, Russia and Armenia signed an intergovernmental agreement on exchange of information in the field of nuclear and radiation safety. The agreement regulates procedures on mutual early notification about nuclear energy activities in either country. It also obliges Russia and Armenia to "constantly exchange information" related to nuclear and radiation safety at their nuclear facilities, a statement said.