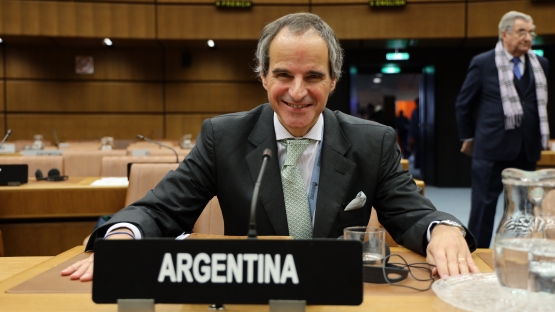 Grossi received 24 votes against 10 for Romania’s Cornel Feruta, who has been acting director general since the death in July of Yukiya Amano.

Grossi achieved the required two-thirds majority in the third official round of official voting by the IAEA’s 35-nation Board of Governors.  His candidacy was supported from the start by the USA and Brazil. Also nominated initially were Lassina Zerbo of Burkina Faso, the executive secretary of the Comprehensive Nuclear-Test-Ban Treaty Organisation, and Marta Ziakova, the head of Slovakia’s nuclear regulatory authority.

Grossi graduated from the Catholic University of Argentina in 1983 with a degree in political science, and two years later joined the Institute of the Ministry of Foreign Affairs.  In 1991, he received a master's degree in international relations from the University of Geneva and subsequently represented Argentina at many on disarmament and nuclear non-proliferation.

From 1997 to 2000, he chaired the UN expert group on the international arms register, and was an adviser to the UN assistant secretary general. He led the IAEA apparatus and the apparatus of the Organisation for the Prohibition of Chemical Weapons from 2002 to 2007, and from 2007 to 2010  was general director for political coordination at the Argentinian Foreign Ministry.

From 2010 to 2013, Grossi served as IAEA Deputy Director General until the Argentinian government appointed him ambassador to Austria. Since 2016, he has been chairman of the Nuclear Suppliers Group. His ambition to lead the Agency is long standing, and he had previously considered running against Amano. However, no major policy changes are expected under his leadership. He has described his appointment as an “opportunity to recalibrate”, suggesting plans for moderate reform rather than radical overhaul. He has praised the IAEA’s safeguards work, affirming this role will continue in a firm and fair manner.

Argentinian Foreign Minister Jorge Faurie has described Grossi as “a career diplomat”. Grossi told reporters after the vote, when asked about Iran: “I will do my job and I think my job is to implement the mandate in a manner which is independent, which is fair, which is neutral. He added: “What I think is important is that I give my member states and the international community the guarantee that I am absolutely independent and impermeable to pressure.”