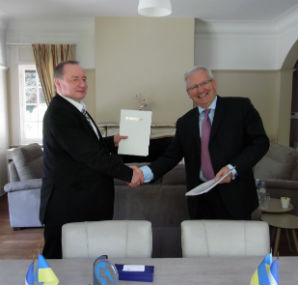 French nuclear company AREVA has won its first contract to supply enriched uranium to Ukrainian utility Energoatom. The first deliveries are expected to start in 2015.

The contract, signed on 24 April in Brussels, was hailed by Energoatom as a step towards ensuring the energy independence of Ukraine.

"Today we signed a contract that extends co-operation with French company AREVA that is one of the world leaders in the field of nuclear technologies," said Yuriy Nedashkovsky, president of state-owned Energoatom. "This contract is a real step towards diversification of nuclear materials supply to Ukrainian nuclear plants."

Energoatom noted that AREVA won the competition not only due to the most attractive price proposal, but also due to "minimum risks" for Energoatom foreseen by the contract.

Ukraine currently operates 15 reactors with an installed capacity of 13,880MWe. Nuclear power accounted for around half of the country's electricity production in 2014.