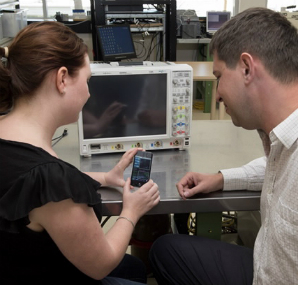 A smartphone's camera is sensitive not only to visible light, but also to higher-energy gamma photons.

Since the amount of incident gamma photons is lost in the glut of visible light photons, researchers put black electrical tape over the camera lens (which also blocks alpha and beta radiation).

The software translates counts per unit time into a dose estimate.

Each phone was used to acquire five one-minute counts for a range of dose rates from 1 to 350,000 µGy/hr.

For both phones the counts per minute recorded were directly proportional to dose rate above about 30 µGy/hr, ANSTO said. It said that the average dose on a long-haul flight is a fourth of that. It also said that this dose level has no health consequences; to reach the annual limit of 1 mSv/year would require 50 hours of exposure of 20 µGy/hr.

It also found that the angular orientation of the phone made no difference to the results.

"This project has demonstrated that a smartphone with a camera can be used as a low sensitivity dose rate meter. If the radiation is coming from a known direction, with sufficient data, limited spectrum information can be determined. There are better detectors than a cellphone camera will likely [ever] be, but there are many more cellphones around than high-quality radiation detectors, which means there are times when the cellphone can be the best detector available."