Another robot to enter Fukushima 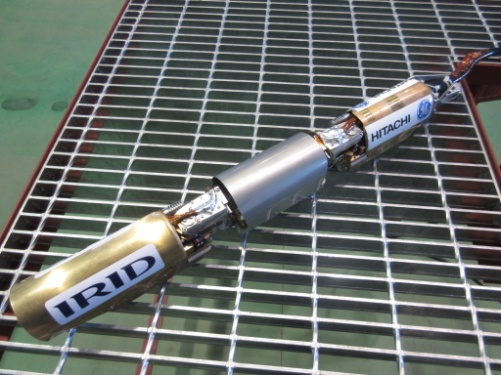 Tokyo Electric Power Company (Tepco) is planning to send a new PMORPH robot into unit 2 of the damaged Fukushima nucleear plant on 14-17 March to explore the basement area of the primary containment vessel.

The robot will take digital images and collect radiation data in preparation for the eventual removal of fuel debris. PMORPH, developed by Hitachi-GE Nuclear Energy and the International Research Institute for Nuclear Decommissioning (IRID), can assume a long, straight shape for passing through narrow spaces, such as pipes, but can also rotate its crawlers by 90 degrees in relation to its central body to assume a U-shape for better stability when travelling over flat surfaces. It is equipped with five cameras and also includes a winch used for lowering and raising a sensor unit that incorporates an underwater radiation-resistant camera, LED and a dosimeter.

Given that previous robots have eventually failed because of unexpected obstructions or excessive radiation, Tepco has taken measures to minimise these risks. The guide pipe through which the robot will access the containment vessel has been replaced, and various steps have been taken to ensure radiation does not escape from the vessel during the investigation. These include tight air seals around the guiding pipe and continuous dust monitoring at the work site.

PMORPH “will carry a dosimeter and waterproof camera to measure the distribution of radiation rates in the water that has been retained inside the reactor, specifically around the pedestal opening of the basement area of the primary containment vessel, to estimate the location and spreading of fuel debris”, Tepco said. “The new robot has also been fitted with laser guides to improve its "spatial ability as well as to enable the device to travel whilst checking obstacles and openings."

Tepco noted that engineers believe deposits seen floating in the water inside the reactor during an investigation in April may pose an obstacle for future investigations and fuel debris removal. Once investigations using the new robot have concluded,   a hose will be used to extract some of the water and analyse the deposits using X-ray fluorescence in order to identify them and determine how to remove or treat them.

Photo: PMORPH was developed by Hitachi GE and IRID