Another hurdle down for Turkey Point 6&7 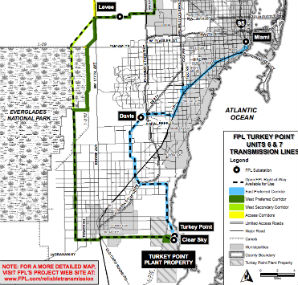 One of the controversial issues about the plan was the requirement for four new power transmission lines that would need to be installed between the plant and centres of demand in the southern and western suburbs of Miami. The proposal was four three new lines in the west Miami-Dade county, and one in the east.

The project has already received Florida public service commission approval and state environmental approval, according to a Reuters report.

FPL said in a ten-year plan published in April 2014 that the next step is for the USNRC to provide a review schedule for the Turkey Point 6&7 combined operating licence application (COLA). It plans for the units to come online in 2022 and 2023.
New COLA reviews are currently on hold until the USNRC resolves the waste confidence issue that was challenged by a US Court of Appeals ruling in 2012. Waste confidence is about the ability of nuclear power plants to store waste safely on site for decades, in the absence of a federal waste repository. A revised generic environmental impact statement and rule is expected to be issued in autumn 2014.