Another contract for Hanhikivi 1 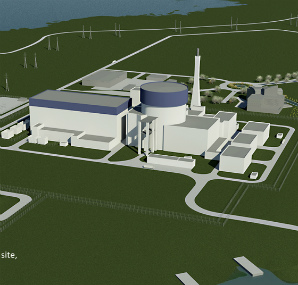 Russia's Titan-2 has concluded a contract for delivery of concrete for the Hanhikivi nuclear power plant in Finland. Titan-2, general contractor for the plant, has signed a contract with Finnish company Ruskon Betoni Oy, which was selected on a competitive basis, to supply concrete to the construction site for six years, until 2021. To fulfill the contract the contractor must build two concrete plants, certify the nuclear concrete with Finland's Department for Nuclear and Radiation Safety (Stuk), and in 2018 begin producing concrete for the construction of the turbine and nuclear islands of the plant.

The international division of Russian state nuclear corporation Rosatom, Rusatom Overseas (now Rusatom Energy International) signed a contract for construction of Hanhikivi-1with Finnish company Fennovoima in 2013. Rosatom has a 34% stake in the project. The plant, with a Russian VVER-1200 (NPP-2006) and is scheduled to begin producing electricity in 2024. Finland's parliament approved the project in December 2014 and in June 2015 Fennovoima filed an application for a construction licence.

Earlier, on 1 February, Russia's nuclear regulatory authority Rostechnadzor and Stuk agreed to hold bilateral workshops and technical meetings in 2016 to discuss the regulation of NPPs and fuel cycle facilities, as well as the accounting, control and physical protection of nuclear material, radioactive waste and radiation sources, Rostechnadzor said. The two regulators agreed on a cooperation programme for 2016 that also includes continued joint inspections of nuclear plants under construction.

Meanwhile, Finland's two main power companies are under pressure. Fortum's operating profit for 2015 was down 26% on 2014, affected by the early closure of units 1 and 2 at the Oskarshamn NPP in Sweden, the company said. Operating profit for 2015 was €808m ($901.6m), compared with €1.08bn in 2014. Fortum owns approximately 45.5% of the three-unit Oskarshamn station, but majority owner E.ON is shutting the units earlier than planned because they are unprofitable. Fortum president and CEO Pekka Lundmark said profitability declined and remained depressed throughout the year due to very low electricity prices. He said the weak market, in combination with an increase in installed nuclear capacity tax of 17% in Sweden, forced the closure decision. In August 2015, Fortum decided to participate in the Fennovoima project with a 6.6% share.

Teollisuuden Voima (TVO) has signed a new revolving credit facility for €1.3bn to be used for "general corporate purposes", the company said. The facility refinances an existing revolving credit facility signed in March 2011 and consists of two tranches, one of €1bn for five years and another of €300m for three years, both with two possible one-year extensions. TVO said the facility was coordinated by BNP Paribas and the Nordea and SEB banks, both based in Sweden. Eleven banks are backing the facility. TVO owns and operates the Olkiluoto NPP in Finland. Unit 3 at Olkiluoto, being built by Areva-Siemens is about nine years behind schedule and costs are almost three times over budget.