Alstom board chooses GE over Siemens-MHI 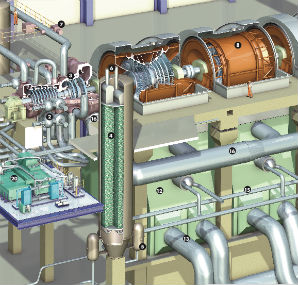 The board of directors of French turbine and power equipment manufacturer Alstom has recommended the $16.9 billion offer of General Electric for its thermal power, renewable power and grid business. It chose the deal over a rival bid from Siemens and Mitsubishi Heavy Industries. The French state confirmed that it would grant foreign investment authorization if the deal remains in its current form.

The deal envisages the formation of three 50:50 joint ventures: one for power transmission equipment, consisting of GE and Alstom grid assets, one for renewables consisting of Alstom offshore wind and hydro, and a third nuclear JV.

The global nuclear and French steam division would include Alstom's production and servicing equipment for nuclear power plants (the Arabelle steam turbine), development and sales of new nuclear equipment worldwide, and Alstom's steam turbine equipment and servicing for applications in France. According to Alstom, the French state would hold a veto over issues relating to security and nuclear plant technology in France.

Alstom said that its board rejected proposals from Siemens and MHI in which Siemens would buy Alstom's gas business for EUR4.3 billion, and MHI would buy a 40% stake in a combined steam, grid and hydro business for EUR 3.9 billion.

The deal now passes to other authorizations and regulatory clearances, and then will be put to a shareholder vote.

French construction company Bouygues, which owns 29% of the company, has indicated that it would support the recommendation. Reuters reported on 22 June that it had given the French state an option to buy 69% of its stakeholding (20% of Alstom).
Should Alstom go back on the recommended deal it would have to pay GE some $250 million in fees.

In May Patrick Kron, Chairman and CEO of Alstom, commented: "The combination of the very complementary Energy businesses of Alstom and GE would create a more competitive entity to better service customer needs. Alstom's employees would join a well-known, major global player, with the means to invest in people and technology to support worldwide energy customers over the long term. The proposed transaction would allow Alstom to develop its Transport business as a standalone company, with a strong balance sheet to capitalise on opportunities in the dynamic rail transport market".

Picture: a detail of the Alstom Arabelle turbine from a Nuclear Engineering International wallchart of the Flamanville 3 turbine building, published in 2010. Nuclear Engineering has published more than 100 back wallcharts. For more information, go to http://www.neimagazine.com/mediapacks/ and scroll down the page.