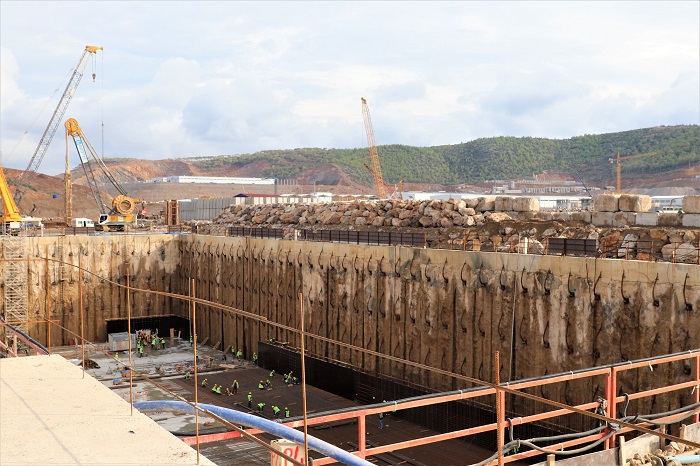 Construction workers have begun constructing the foundation slab for the pump station at unit 1 of the Akkuyu nuclear power plant under construction in Turkey, Akkuyu Nuclear announced.

Reinforcement and installation of formwork is underway at the site involving around 400 people. Pump stations are a complex of facilities designed to supply seawater to the main process shops of the plant and are a part of the modern high-tech system of the shore hydraulic engineering structures of Akkuyu NPP. A total of four pump stations will be built, one for each unit.

The depth of the foundation slab of the pump station is at an elevation of 16.5m below sea level. In order to withstand the pressure of seawater, the construction is being carried out under the protection of 1metre-thick concrete diaphragms. Their walls are reliably held by three rows of special fasteners – anchor ties. There are 384 such ties in the diaphragm walls, three rows of 128 in each. The height of the station building superstructure will be over 11 metres, and the basic process equipment and the water intake part will be located underground.

Akkuyu Nuclear First Deputy CEO and director of the NPP under construction Sergei Butskikh noted: "Development of the foundation pit for the pump station of unit 1 started in December last year. A whole complex of preparatory work preceded the construction of the pit: filling of the water area, construction of barrier walls, formation of a storm protection embankment. After that, a pit 22 metres deep was dug, and a foundation base – concrete pad – was laid from the bottom to the elevation of -16.5 metres.”

He added: “Now we are proceeding from the preparatory stage to the direct construction of the pump station. About 30,000 cubic metres of concrete are to be laid into the foundation slab of the building. In terms of complexity, the facility can be compared to the construction of a small hydroelectric power plant, so the design of the pump stations required serious efforts from a team of qualified Russian and Turkish engineers, and the construction is in progress using the most advanced technologies."

At the beginning of 2022, the construction of the foundation slab of the pump station for Akkuyu 2 will begin. Complex configured water pipelines for the main cooling pumps will similarly be put in place there and a special formwork will also be used to ensure the necessary precision. At the same time, preparations are continuing for the construction of the pump stations for Akkuyu 3 and 4.

Earlier, Atommash, the Volgodonsk branch of AEM-Technologies (part of Rosatom’e mechanical engineering division Atomenergomash) shipped the first three tanks of the passive core flood system (SPZAZ) for Akkuyu 1. From the plant, the products will be delivered by road to the port of Rostov-on-Don, where they will be loaded onto a river-sea vessel. The vessel will then deliver the equipment to the Akkuyu NPP berth. The length of the sea route will be about 3000 kilometres.

SPZAZ is part of passive safety systems, which includes eight hydraulic tanks with a volume of 120 cubic metres each. The weight of the tank is 78 tons, the height 10.4 metres, and the diameter is 4.2 metres. During operation at the station, an aqueous solution of boric acid is stored in tanks, heated to 60 degrees Celsius. When the pressure in the primary circuit drops below a certain level, the liquid is automatically supplied to the reactor and the core is cooled.

Photo: Workers have begun constructing the foundation slab for the pump station of Akkuyu 1 (Photo: Rosatom)