The 110-metre-high chimneys at Windscale have been a major part of the Sellafield skyline for over 60 years. But with decommissioning work progressing on the last remaining chimney, the skyline is set to change for good over the next several years. Sellafield Limited announced earlier this month that work to decommission the filter gallery on top of the last remaining Windscale chimney is now fifty percent complete. The 530 tonne filter gallery at the top of the chimney prevented much of the radioactive contamination escaping to the local area after the Windscale Pile One caught fire in 1957. The gallery must be removed before the chimney itself can be dismantled.

"The contaminated filters themselves were removed not long after the fire and the chimney was then sealed up to allow the radiation to decay," explains Chris Wilson, pile chimney demolition project manager.

"We're now working to dismantle the filter gallery itself, which provided access to change and clean the filters," he adds.

Decommissioning of the large, steel, brick and concrete filter gallery is being carried out using conventional demolition techniques common in other industries but in an unconventional environment at the top of a nuclear chimney, according to Wilson.

"Core drilling is breaking up the concrete and the rubble is then manually transferred to the ground in the small goods hoist [capacity 1 tonne] which runs up and down the chimney."

As of 16 April 2014, Sellafield Ltd, which is managing clean-up of the Sellafield site on behalf of the UK Nuclear Decommissioning Authority (NDA), estimated that 172t of steelwork, 66t of brick and 150t of concrete had been brought down since work began late last year. Most of the waste was found to be suitable for disposal at the on-site landfill.

Sellafield Ltd expects the filter gallery will be fully dismantled by October 2014. The company is currently owned by Nuclear Management Partners (NMP), a consortium of URS, AMEC and French firm AREVA, which has been responsible for operating the Sellafield site since 2008.

Next steps for Windscale decommissioning

After dismantling of the filter gallery comes removal of the diffuser - a box-like structure sitting below the filter gallery. Preparations will be made in 2015 to erect a tower crane next to the chimney. The 1400 tonne concrete diffuser box will be cut up using diamond wire and lowered down in 7 tonne blocks.

Sellafield Ltd says this new approach is estimated to improve the efficiency of the demolition by over 700%, making it both safer and more cost effective. This will ensure another skyline change at Sellafield by 2017/18 and the demolition of the chimney barrel a few years later.

"There's no instruction manual for the job and we have to prove the decommissioning techniques chosen can be used 100% safely on the congested Sellafield site."

Over 5000 tonnes of materials in total is to be removed during full demolition of the chimney to ground level.

About the Windscale chimneys

Nobel prize-winning physicist John Cockcroft famously insisted that the Windscale Pile chimneys be fitted - at great expense - with high performance filters. Since this was decided after the chimney barrels had been designed and partially built, they produced iconic bulges at the top of the structures - known as the Cockcroft's Follies - which prevented the Windscale Fire disaster from becoming a catastrophe.

Following the fire, the chimneys were sealed at the top, the contaminated filters removed and air inlet ducts isolated. Radiation levels had to reduce significantly before decommissioning work could start.

The first chimney was reduced to the level of the adjacent reactor building in 2001. But the second chimney posed more of a challenge due to radioactive contamination from the fire, and was opened up for the first time in 17 years in 2013.

Decommissioning work on the remaining chimney has also involved: stripping out the thermal insulation lining; taking down the concentrator; dismantling the filter in-fills; removing the four 10 tonne winches that were used to raise and lower the head gear platform inside the chimney on which a remotely operated demolition vehicle was deployed to remove the chimney lining and steel work. 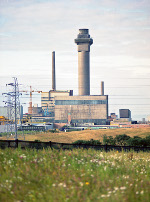 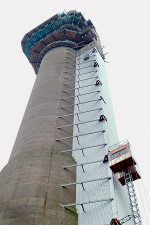 Close-up of the Windscale chimney before decommissioning
Post to: