The first-of-a-kind VVER-TOI reactor, being built at Kursk II in Russia, uses the same engineering approaches as earlier VVERs, but has a few unique features 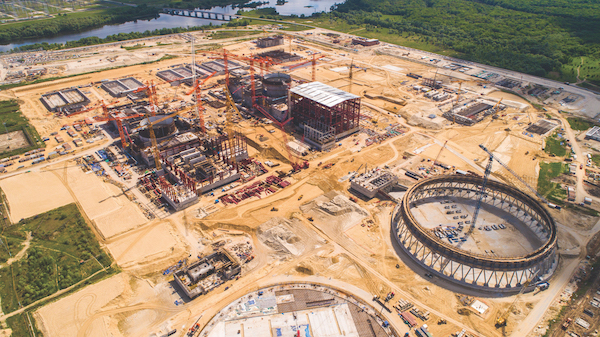 The Russian-designed VVER-TOI is based on the engineering solutions used for a nuclear power plant with VVER-1200 reactors.

The VVER-TOI design provides for a longer self-sustained emergency operation of a plant, as well as a smaller amount of solid radioactive waste and emissions. It combines active and passive safety systems. In addition, it ensures the transition of the reactor plant to a safe state in the event of various combinations of natural and man-made events causing a complete black-out: the power unit can survive a commercial aircraft crash, an earthquake and a tsunami happening simultaneously. The plant grace period requiring no operator intervention has been extended to 72 hours.

Since the VVER-TOI design uses the same engineering approaches as its predecessor, it requires no changes in the basic conceptual, structural and layout solutions for the power plant, though a new equipment layout is required. The steam generators are arranged in two rows, with two steam generators in a row. Earlier designs required a tangential arrangement around the nuclear reactor.

The reactor vessel design has also been changed. The bottom diameter has been increased by 100mm and is equal to the outer diameter of the core shell (the classical design provides for a structural connection between the bottom and the core shell). The bottom shell of the nozzle area is also the support shell, though the welded joint is excluded (there are four vessel welds, in comparison with five or six welds in the classic designs). The angle between the axes of the even and odd nozzles has changed to 78° (the classic design provides for 55°).

Kursk II is the first project to use the VVER-TOI and it has four new power units with a capacity of 1300MW each.

AEM-Technology (a subsidiary of AtomEnergoMash, Rosatom’s mechanical engineering division), the only Russian manufacturer capable of making a complete nuclear steam generator, is also the manufacturer for the VVER-TOI.

According to Igor Kotov, director general of AEM Technology, the Kursk II project is the next stage in the development of Russian VVER technology.

“AEM-technology is the largest manufacturer of this equipment, and VVER-TOI manufacturing is a challenge for us. It is an opportunity to show our ability to quickly adapt manufacturing processes to meet new challenges maintaining high standards. Despite the quarantine restrictions, we succeeded in manufacturing the first set of equipment with a new Russian reactor of VVER-TOI type,” says Kotov.

AEM-technology facilities manufacture up to four sets of equipment per year. The company backlog of orders for the period up to 2025 is worth 193 billion rubles. The company’s manufacturing plan for nuclear plant equipment for the period to 2028 includes 24 reactor vessels with internals and 93 steam generators. The extensive investment programme, providing for the commissioning of 388 new equipment items and associated investment, is around 9.7 billion rubles.