Although their image quality may not equal that of rigid borescopes, video endoscopes are powerful tools for a variety of inspection jobs where the working area is inaccessible or hidden.

Both videoscopes and borescopes have a thin tube, rigid or flexible, that can fit into a small gap or hole, and beams back images to enable detailed remote visual inspections of for example weld quality in new-build, or corrosion in reactor system pipework. The key technical difference between a two devices is the way the image is transmitted.

A borescope is essentially a rigid hollow tube that carries an image focused from a lens on one end to an eyepiece on the other. As it relies on optics, its image quality is probably superior, but its shape is limited to a straight rigid tube.

Videoscopes contain a camera in the tip which converts an optical image into an electrical signal, which is transmitted to a processor at the near end along a cable that runs the length of the probe, which is flexible.

Borescopes tend to be the least expensive of the three devices, and videoscopes the most; a third category, fibrescopes, which are intermediate in price but not examined here, channel an optical image through flexible fibre-optic cables). Despite their cost, videoscope systems have evolved to suit many industrial needs.

"There seems to be a trade-off between miniaturization and sophistication"

Videoscope systems come in varying levels of sophistication, and varying sizes, both in terms of probe length and diameter. There seems to be a trade-off between miniaturization and sophistication; smaller-diameter probes are simpler. Most have a tip that flexes under control, like a finger, to manoeuvre in narrow spaces. Two-way articulation is common; four-way articulation is less so. There are many choices of probe tips; although the end-view probe type is the most common, a tip with a mirror to allow a 90° side view is not uncommon. An integral light is essential to be able to see anything; many systems use LEDs, again mounted on the tip. Videoscope of inspections can be recorded in still images and video on removable storage media, such as an SD card.

Below is a round-up of various products on the market.

Machida videoscopes feature a special grip which looks a bit like a fishing rod for single-handed use. A total of five scopes connect to a 10-inch (7.3kg) or 15-inch (8kg) video processor. The probes themselves are very small: the 2mm-diameter forward-facing VSC-2-86 has a 90° field of view, with no articulation, but working length is comparably short: 0.86m. Another unit is a 3mm-diameter scope equipped with the same camera (working length 0.65m) with a 1.2mm working channel to enable the use of retrieval tools that run inside its full length. A new 6mm-diameter videoscope has four-way angulation and a detacheable side-view adapter. The smaller of two models of video processor includes light control, gain control, picture-in-picture freeze and built-in keyboard.

The viZAAR INVIZ VUMAN RA-Y, 7.4kg-9.9kg excluding cable, is operated by a 10-inch touch-screen interface and joystick. It has an integral 7.8W LED light source. Its smallest probe is the 6 RF, 6.4mm diameter, with 130° field of view, although without articulation (cable lengths range from 8m-15m). Its articulating probe, with 70° field of view, is 8.4mm, and can bend up to 90° in two axes in 120° in the other two (cable length 5m-30m). Unusual features include a continuously revolving probe (12.7mm), and a long depth of field, so it can focus on features from 2mm to infinity.

GE Inspection Technology's XL G3 VideoProbe, 10.9 kg without case, integrates a VGA LCD screen in a hand-held controller that is linked by cable to the base unit. It has a 75W high-intensity discharge (HID) lamp controllable with either manual or automatic exposure. Its smallest probe is 3.9mm, with 80° or 90° field of view and four-way tip articulation of 140° (cable lengths range from 2-3m). It records 290,000 pixels, nearly VGA standard. A larger probe (minimum 5mm diameter, lengths from 2m-4.5m) has a 440,000-pixel camera (nearly PAL video standard). Maximum probe length 9.6m. Probes can incorporate measurement functions such as distance measurement using either stereo images or based on a cast shadow.

Olympus has a range of eight videoscopes

The high-end iPLEX FX unit, 7.5kg including handset with integral joystick, incorporates a 6.5-inch screen in a hard case protected with rubber corner bumpers. Illumination is from 'multiple ultra-high intensity LEDs' at two brightness levels. A 6.2mm-diameter probe has a forward field of view of 120° and four-axis articulation of 120°; it also incorporates a working channel over its length of 3.5m. Video resolution is up to the PAL video standard. The iPLEX FX can also be fitted with stereoscopic tips with 50° field of view, depth of field 5mm-infinity, to measure point-to-point distances, depths and areas.

The iPLEX TX unit has a 2.4mm forward-facing tip with 80° field of view, 3-70mm depth of field, 135° two-way articulation, on a 1.2m cable length. The iPLEX RT has PulsarPic image processing software. The iPLEX YS operates an 8.5mm-diameter scope over a 30m-long cable with laser diode illumination. The iPLEX RX, launched in mid-November, has what is claimed to be the highest resolution of all videoscopes, using a new chip, but exact numbers were not released. 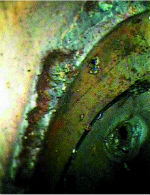 Video taken with the Lenox system

Switching a probe on a the XL G3 VideoProbe handset

The MicroEye Mobile videoscope from Ultrafine Technology of the UK, 1.5kg, has an integral 8-inch touch screen and cable handle buttons. 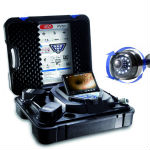 The Lenox videoscope system packs into a rigid carrying case. It includes a 7-inch monitor that comes with a 2m umbilical.
Post to: