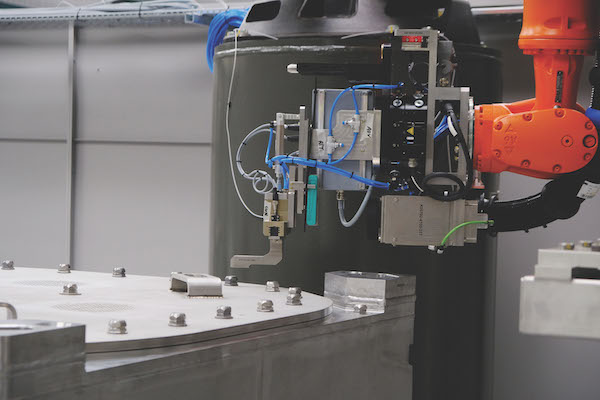 When Calder Hall, the original Magnox CO2-cooled reactor, was built on the UK’s Cumbrian coast in the 1950s, industrial automation was in its infancy, computerisation was almost non-existent outside universities and robotics was the stuff of science fiction stories. A great deal has changed over the subsequent seven decades.

An area of the Sellafield site is given over to the storage of waste from the earlier days of nuclear power generation, including material from Calder Hall. Officially opened by the Queen in 1957, Calder Hall began commercial electricity generation in 1959, with an expected life of 30 years; it was shut down for the last time on 31 March 2003.

Sellafield extends to 265 hectares. It hosts 200 nuclear facilities and more than 1000 buildings altogether. Over 9000 people work there, making it the largest nuclear site in Europe. It has the most diverse range of nuclear activities of any single location in the world.

Its main activities now include nuclear fuel reprocessing, waste storage and decommissioning. The estimated lifetime costs of the Sellafield decommissioning programme are currently estimated at around £70bn. The programme is scheduled for completion in the 2120s.

Defueling operations at Calder Hall were completed in 2019. Its four reactor buildings have since been placed into a ‘care and maintenance regime’, pending final decommissioning and demolition.

While safety has always been a priority in construction and operation of all the activities at the Sellafield facility, past understanding of what would be needed for management in the future was neither as clear nor as detailed as now.

The Pile Fuel Cladding Silo (PFCS), which was built in the 1950s, was filled over several decades primarily with aluminium fuel cladding, which was stripped from fuel rods when they were removed from the reactor for reprocessing. The silo also holds significant quantities of Magnox swarf and other items, which were not recorded in detail.

The atmosphere inside the silo is inerted with naturally fire-suppressant argon gas. Cavendish Nuclear has been contracted to access the legacy waste, remove it and load it into containers ready for transfer to safer, longer term storage.

While the presence of radiation and unknown materials behind the sealed doors of the compartments making up the PFCS make it “one of the most significant radiological challenges in the UK”, according to Cavendish Nuclear, the project is, at heart, about transferring hazardous material from a legacy storage facility into high integrity containers ready for long term storage.

The Cavendish team decided that the best way of delivering the project was to keep it simple: to employ straightforward manufacturing techniques and use established technology and equipment that is as near to being standard commercial off-the-shelf as practical.

“The PFCS is similar in design to a Canadian grain silo but rather more robust; a lot of thought went into it,” says Glenn Moss, engineering manager at Cavendish Nuclear. “The waste has been in the silo for 50-plus years and it was not built with emptying in mind. Delivering the project is very, very difficult.”

Cavendish was keen from an early stage to use automation, robots and remotely-guided vehicles, to minimise risk to personnel. Human labour would not be feasible when dealing with radioactive material.

The process and methodology were rehearsed on a replica and training retrievals facility site at Babcock International’s facility in Rosyth, Scotland.

“The new containers are transported into the cell via an automated guided vehicle where the KUKA KR150 robot arm unscrews all the bolts on the lid,” says Moss.

“The container is then moved along to a vertical access shaft, where it is lifted 14 metres to the first storey level and the lid removed prior to sealing onto the retrievals module,” he continues.

“A crane, located at first floor level, reaches into the silo, removes waste material and places it into the container. When it is full, the lid is replaced and container is lowered back to ground level.”

Dave Burns, nuclear technical sales at KUKA Robotics, adds: “The KR150 replaces the lid bolts and tightens to predetermined torque levels. It then rubs a swab around the outside of the lid’s seal, which is analysed for any contamination.”

Although the KUKA KR150 robot itself is working in a radiologically clean area, it is exposed to radiation from the filled waste containers. So, it is slightly modified so that components that might be compromised by radiation are relocated away from it and shielded. These are primarily the PCBs; the motors and hydraulics have not, in KUKA’s extensive experience, been affected by radiation.

The staff operating the process have received special training and gained new skills in operating automated equipment. More importantly, they have a much safer working environment.

This article was taken from a recent KUKA Whitepaper – Nuclear power decommissioning and the next generation. This document describes the current situation, what the future holds and how automation can deliver safety, efficiency and cost savings in existing nuclear programmes, in today’s new build and into the next generations. 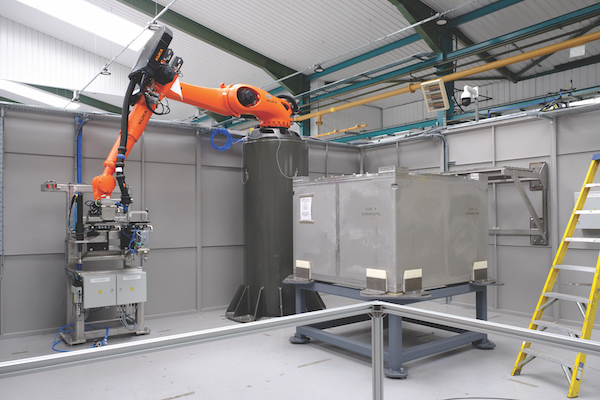 Robot at the test facility aligning the on-board tool changer with the bolting tool located in the tool rack (Photo: Cavendish Nuclear)