The UK must act now if it wants to maintain its nuclear capabilities, warns Professor Andrew Sherry, Chief Scientist at the UK's National Nuclear Laboratory

As we move towards the large-scale electrification of heating and transport, the demand for low-carbon energy is set to quadruple by 2050. This should be good news for the future of our industry as the ways this change can realistically be achieved are limited; namely through renewables, carbon capture and nuclear.

But while we see significant progress in renewables, carbon capture has stalled, and investment in nuclear is faltering. Two major UK nuclear new-build projects that were in the pipeline, Wylfa Newydd and Moorside, have now stalled. It leaves  Hinkley Point C, which is on course to come online in 2025, though at a higher strike price than is now seen for renewables, including offshore wind. And therein lies the problem.

The cost of building large power plants has pushed the price of nuclear too high – almost twice that of offshore wind, where the price is falling.

With the UK’s existing fleet of Advanced Gas-cooled Reactors (AGRs) scheduled to come offline by 2030, the cost of nuclear new-build poses a real challenge to the future of our domestic industry. And it has left us with a critical question: do we want to be nuclear producers going forward?

No time to delay

There is no option to defer this decision and pause. The time to decide is now. If we delay too long, our industry will dwindle, the supply chain will disintegrate, and the talented people working in the industry today will move elsewhere. The UK will likely lose its nuclear generation capabilities for good, while other countries such as China and Russia continue to move forward.

The UK is not alone in this dilemma. The USA faces similar pressures regarding its nuclear fleet and the root of the problem - the cost to build - is the same the world over. This is why leading players from the international nuclear industry came together for the Innovation for the Future of Nuclear Energy Global Forum in South Korea, in June.

It has become clear from talking to our international counterparts that the nuclear sector can learn from other industries and other major infrastructure projects. We can use that knowledge to drive change in nuclear. We need to review all aspects of our industry: the technologies we use, our culture and leadership, our collaborations and supply chain management, our approaches to programme and risk management, the way we finance nuclear projects, and the way we enable regulation. If we do this, we will be in a position to lower costs, increase productivity and deliver international exports.

Yes, nuclear is heavily regulated. But when you analyse the cost of a new nuclear power station, around 70% is spent on the civil engineering side. The ‘nuclear island’, containing the reactors and vessels, makes up just 15% of the build costs. This leaves a tremendous opportunity for innovation in design, manufacturing and construction.

The ambition has to be to match the progress of offshore wind by halving the current cost of nuclear and delivering a much greater return on investment. There are three main routes we should explore to achieve this.

The first priority is to learn from Hinkley Point C. EDF Energy believes that a new plant at Sizewell could be built 20% cheaper than Hinkley Point C, in part due to learning from experience and replicating construction techniques. If the UK were to stick with this design, what savings could be made on the fourth or fifth build? Taking a fleet approach should be considered.

The second option is designing plant for modular construction. This approach would see the majority of the build taking place offsite, using standardised components and advanced manufacturing techniques in factories. There are significant economies of scale in this approach, which is the reason we see it being pursued by organisations such as the UK SMR consortium led by Rolls Royce.

The third route is in considering the potential for advanced modular reactors to generate low carbon high-grade heat. Future advanced reactors will be able to produce heat up to 1000°C, opening up the possibility that nuclear can supply more than electricity. There are several industries, such as iron and steel and chemical manufacturing that could benefit from this heat production. The proof of concept has already been demonstrated at Wylfa, where electricity generated from Magnox reactors was supplied for aluminium smelting alongside electricity to the national grid.

Another interesting by-product from high-grade heat could be hydrogen production which has a wide range of applications, not least transportation and home heating. National Grid estimates that a third of homes could be hydrogen heated by 2050.

Staying in the game

If the UK keeps its hand in, then the potential for nuclear power is huge. Nuclear can provide a reliable source of electricity for the national grid. It will also help the UK to achieve its net-zero climate target and end our contribution to global carbon emissions. If we think big, we could see the UK leading the world in nuclear, especially in the field of modular reactors.

So, are we going to be makers or takers of nuclear technology going forwards? There is a real risk the UK could miss the boat if we do not take the right actions now. But, with a good wind at our backs, we could see the first modular reactors coming online, just as the last of our current fleet of go offline in 2030. The potential is there to be realised.

Torness is expected to be one of the last AGR reactors to retire in 2030 subject to life extension (Credit: EDF Energy) 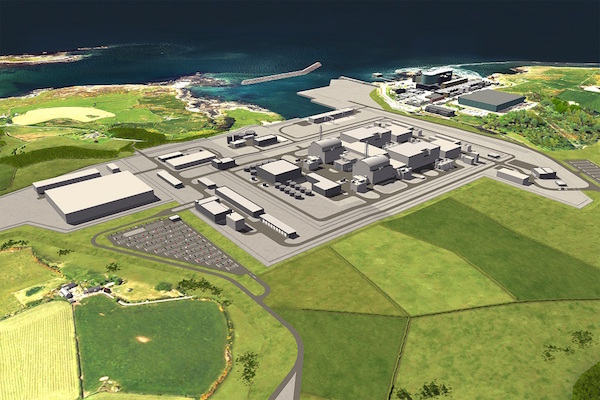