Electricity is essential to modern life. Demand has grown steadily for more than 100 years, and projections show that it will continue to do so as many parts of the world continue to develop and as greater use of electricity is poised to lead the way on decarbonisation. More than a billion people around the world still live in the dark, without access to electricity. Humanity has a responsibility to learn from the past - everyone has the right to enjoy a modern lifestyle, but without causing harm to ourselves or the planet.

The challenge before us, however, goes far beyond electricity – we will need to find ways to decarbonise the entire economy that are sustainable in the long term. It means ensuring that we remove carbon from the way we heat our homes and industries. This means ensuring that the way we travel, export our products and ship our food moves away from fossil fuels.

We need to deliver a transformation which is both socially and environmentally sustainable. We need to device a system which is affordable and help us to not only alleviate poverty, but can also ensure the realisation of human potential. We need a power source that can not only help us combat the effects of climate change and environmental degradation, but also help bring electricity to the corners of the world that still does not have access to it. Renewable energy sources have a role to play, but the real workhorse for this sustainable world will be nuclear energy -  and it is already making a major contribution.

A grand total of 448 nuclear reactors in more than 30 countries are unsung climate heroes. They operate day-in and day-out, often out of sight and out of mind. Capable of generating immense amounts of clean power, they are the silent giants upon which we will rely to truly transform our global society into a sustainable one.

Between 1970 and 2015 the use of nuclear energy avoided the emission of some 68 gigatonnes of CO2, according to IAEA. To put that into perspective, it is the equivalent of all CO2 emissions from the power sector for the period 2010 to 2015.

The nuclear industry, led by World Nuclear Association, is ready to take on the challenge. As part of our Harmony Programme we have set a target to build an additional 1000GWe of reactors across the world by 2050 at the latest, bringing the global share of electricity production of nuclear to at least 25%.

Modernity is entirely dependent on the steady supply of electricity, 24 hours a day, every day of the year – regardless of weather, season or time of day. The International Energy Agency’s recent report on nuclear energy highlighted the importance of dependable base-load electricity generators, the need to properly value generators that provides electricity security, as well as ensuring that they are adequately compensated. Nuclear energy is aptly placed to provide this service and, seeing how the majority of base-load is currently fossil-based, the increased use of nuclear would be able to quickly decarbonise the backbone of the electricity system.

Despite an impressive growth in renewable energy, the stark reality is that renewables will not be able to resolve the multitude of issues stemming from our dependence on fossil fuels. The most mentioned is the issue around intermittency and storage.

Clearly, the sun does not always shine and the wind does not always blow, and at many times such periods are also when electricity demand is at its highest. Storage solutions, such as batteries, will not be able to power our societies for weeks at an end when renewable generation is low. The most-used solution for the intermittency problem to date is natural gas, which only serves to reinforce our dependence of fossil fuels and severely threatens to undermine the green credentials of renewables.

Moving to a sustainble future

Extensive modelling by the IEA has concluded that if we do not use nuclear energy for the decarbonisation of the economy, it will be considerably harder and more expensive to achieve our greenhouse gas reduction targets.

The IPCC Special Report on Global Warming of 1.5°C examined 85 different scenarios with different pathways for limiting global warming to 1.5°C. Of those scenarios, the median increase of nuclear’s contribution to electricity production was 2.5 times higher than today. A representative example scenario that would require fewer radical changes – eg, dietary, travel habits – and greater electrification saw the need for nuclear increase by more than five times globally.

Nuclear power will help us decarbonise transportation and heating processes, as well as delivering fresh water around the world through desalination of seawater. It will allow countries to take charge of their own destinies by decreasing their reliance on imported energy – enhancing independence in uncertain times.

What needs to change?

As part of the Harmony Programme, the world’s nuclear industry has identified three key obstacles to unlocking the full potential of nuclear energy – the need for a level playing field, the harmonisation of regulations and the establishment of an effective safety paradigm.

In regard to the need for a level playing field, we see that in the societal debates on energy currently taking place, being seen as reliable is not being valued and is being taken for granted. Many of the world’s energy markets currently operate in an inherently unsustainable fashion, dominated by short-term thinking rather than looking to the future. The markets fail to take into account the full costs and benefits of different electricity generators, where traits such as ability to produce base-load are not given the credit they are due.

This has resulted in nuclear energy struggling to compete with energy sources that have either been subsidised for political reasons, or do not have to take responsibility for using our common atmosphere as a dumping ground. We therefore need to create a level playing field where such sustainable base-load is supported.

Furthermore, while the nuclear industry by and large is responsible for its lifecycle costs, the cost of renewables does not include the significant hidden impacts brought on by costly backup provisions or having to retrofit the grid.

In regard to the need to harmonise regulations, we see that multiple regulatory barriers, stemming from the lack of a coherent licensing processes and different safety requirements, currently limits global nuclear trade and investment. A lack of international standardisation places unnecessary regulatory burdens on nuclear activities, and delays in the licensing of new designs hinders innovation.

In regard to the need to device a new and effective safety paradigm for the nuclear industry, we see that the current system is not holistic in its nature does not focus on the health and environmental benefits brought by nuclear, especially when compared to other energy sources.  For instance, the health benefits of nuclear energy in comparison to other major energy sources are evident. The use of nuclear has consistently prevented many thousands of deaths annually and continues to do so, predominantly from the avoidance of air pollution. It is crucial that any safety paradigm in the energy sphere recognises these lifesaving measures.

Nuclear for a sustainable tomorrow

Nuclear energy is already making a significant contribution to providing the world with clean and abundant energy, and has a proven track record of being a reliable workhorse around the world. Countries like Sweden, France and Switzerland have proven that it is possible to divorce economic growth from an increase in damaging emissions and to the timescales required to effectively challenge climate change and environmental degradation. Nuclear can ensure that fast growing populations will get rising living standards – without having to sacrifice the climate or their own well-being.

The sheer energy density of the fuel means that a few kilos of uranium are all you would need to provide power for the rest of your life. Unlike any other power source, nuclear energy helps us reduce our total footprint, going beyond just the environment. When accounting for factors such as cost (eg, fuel and construction costs), carbon (lifecycle greenhouse gas emissions), water and land footprints, nuclear is far ahead of all other energy generators.

The largest footprint of (new) nuclear power is in relation to its high capital cost during the construction of the plant. Beyond this there is a great potential for further cost reductions across the nuclear industry – be it building standardised fleets of large reactors or new technologies such as small modular reactors.

We cannot afford to wait – we need every part of the puzzle to contribute towards solving some of the greatest challenges faced by humankind in a very long time. The impacts of climate change will first hit the poorest and most vulnerable across the world, and failing to act will have significant humanitarian consequences.

Nuclear power holds the potential to herald a new, cleaner and truly sustainable world - enabling us to pass on a cleaner planet to our children. Reactors are capable of generating enormous amounts of clean power, regardless of whether it is sunny or cloudy, windy or calm, day or night, summer or winter. You can rely on nuclear energy always being there for you, whenever you need it. By harnessing the power of the atom we can build a better tomorrow – today. 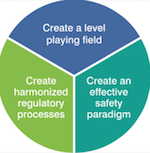 As part of the Harmony Programme, the world’s nuclear industry has identified three key obstacles to unlocking the full potential of nuclear energy
Comparative levelised cost of electricity and system costs by generating technologies in four countries