The road to Hanhikivi

Caroline Peachey looks back over ten years of work on the Hanhikivi project, from construction developments at the site, to progress on financing, licensing and recruitment 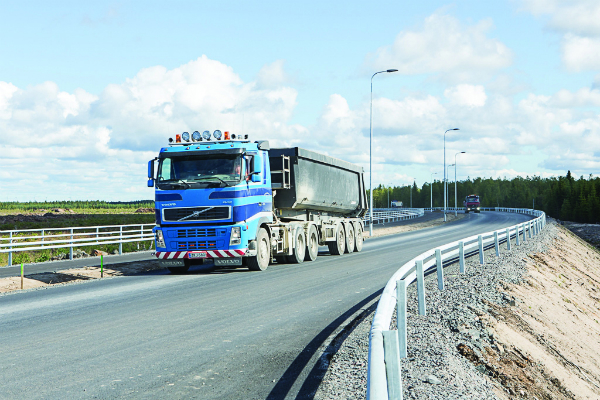 In Helsinki, 10 October 2017, blue and white flags were blowing in the wind in honour of Aleksis Kivi, one of the first authors in the Finnish language. But 600km north in the municipality of Pyhäjoki, it is nuclear, not wind, that looks set to be the centre of Finland’s future electricity production. In the remote part of northern Finland, Fennovoima is building a 1200MW Russian-designed VVER-1200 nuclear power plant, Hanhikivi 1, name after the peninsula upon which it will be located.

The project began in 2007 with the set up of Fennovoima, a non-profit cooperative of Finnish power companies and industry. A Mankala company, Fennovoima will produce electricity for its shareholders at cost price – estimated at a maximum of €50/MWh, or around half the price of the UK’s Hinkley Point C project, which is being built on a similar schedule for startup around 2025.

In January 2009, after spending two years investigating potential sites and carrying out environmental impact assessments, Fennovoima applied to the Finnish government for a decision-in-principle to build a new nuclear power plant. The application was based on a one or two-unit plant supplied by Areva or Toshiba, located in Pyhäjoki or Simo. In July 2010 parliament voted in favour of Fennovoima’s proposal as well as TVO’s plan to build a fourth reactor at Olkiluoto. Fortum, however, received a negative decision for its Loviisa 3 project.

In October 2011, Fennovoima chose Pyhäjoki over Simo as the preferred site for its plant due to more favourable bedrock and seismic characteristics. Work on the project continued, but it faced a setback in October 2012 when German utility E.On, which had a 34% stake in the project from the outset, pulled out after choosing to end all business in Finland. Fennovoima then began evaluating the potential to scale down the project from 1600MW to 1000-1300MW. In December 2013, Fennovoima signed a plant supply contract with Rusatom Overseas for a power plant with a VVER-1200 reactor. Another agreement established that Rosatom would take a 34% share of Fennovoima (through Finnish subsidiary Raos Project) and that it would help arrange finance for the plant. The deal was completed in March 2014, and Fennovoima applied to the government to change the design of the unit to a VVER-1200. The government agreed in September, provided that at least 60% of the company’s shareholders were Finnish upon submission of the Hanhikivi construction licence application.

Fennovoima submitted its 250-page construction licence application to the Finnish Ministry of Employment and Economy in June 2015. By that point, Finnish ownership in Fennovoima stood at over 60%.

The focus of Fennovoima’s work in 2017 and 2018 will be the delivery of the construction licence documentation, site preparation and recruitment for the Fennovoima organisation, says Minna Forsström, Hanhikivi 1 project director. The company also hopes to start procurement of the long-lead items, such as the reactor pressure vessel and forgings, which will be made in Ukraine by Atomenergomash, Rosatom’s equipment manufacturing and engineering arm.

The licence documentation, all submitted in English, give a general description of the site, plant type, safety systems and operating organisation. Review of the construction licence application by the Radiation and Nuclear Safety Authority (Stuk) is expected to take at least two years. Stuk also approves the major suppliers and their management systems, something that differs from the rest of the world, notes Forsström. Plus, Stuk is able to conduct unannounced inspections of Fennovoima or its supply chain.

In September 2017, Fennovoima revealed that it is not expecting to receive the construction licence until 2019, but the impact this will have on the overall schedule remains unclear. Forsström says that Fennovoima’s Russian partners play a “major role” in preparing the construction licence application documents. Fennovoima then reviews them and submits them to Stuk for review. Stuk then makes comments and additional requirements before approving them. As such, licensing submittal is “an everyday action” says Forsström.

Liisa Heikinheimo, deputy director general of Finland’s Ministry of Economic Affairs and Employment, presented 10 October, a revised schedule of work being carried out by Stuk. It shows that reviews of the Hanhikivi 1, Olkiluoto 3 and Posiva repository licence applications are being carried out simultaneously, alongside other regulatory work.

“The target for operation remains 2024 even though there have been some discussions with Rosatom regarding the schedule,” says Forsström. Further clarity is expected later this year. Stuk will update its schedule based on information from the supplier.

From greenfield to green energy

The 546km2 Pyhäjoki region is sparsely populated, home to just 35,000 people. Nature is at the heart of life, with hunting, fishing and berry picking all popular activities. As a green-field site, the Hanhikivi peninsular was covered in forest.

Initial site preparation works focused on cutting down trees, bringing electricity and water to the area as well as building and strengthening roads. Construction of the 4km Hanhikiventie road started in September 2014 and was completed the following October. Taking into account lessons from Japan’s Fukushima Daiichi accident, the road has been raised 4.6m above sea level to ensure access to the site in case of flooding or natural disaster.

The focus of construction has now shifted to excavation works for the cooling tunnels, reactor foundation and buildings.

Fennovoima will invest €400-500 million in the project, before construction of the nuclear island begins, according to Jouni Sipiläinen, construction director for Hanhikivi.

Work is being carried out with the environment in mind; rare plant species have been protected, and some species of moor frogs relocated. Fennovoima is also aiming to reuse 85% of the waste generated during construction, says Sipiläinen. The site waste sorting station will be operated by Rosatom, with Fennovoima responsible for transport of materials. Construction of 21 two-storey accommodation buildings for 1000 workers is underway, while the training building and main gate building have already been completed. Fennovoima is also erecting a weather mast at the highest point on site, 120m above sea level. Sipiläinen told NEI there is a requirement to collected weather data, such as wind speed, for three years before nuclear fuel can be loaded into the reactor.

Two concrete batching plants, with a capacity of 120m3/hr, have also been finished, and testing is underway. The concrete is to be supplied by Finnish company Ruskon Betoni.

When we visited the site, excavations for the reactor had reached 2m below sea level. Sipiläinen says the depth of the foundations will vary from -7m to -16m, with the cooling water pumping buildings to be located 25m below sea level.

In September 2016, Terramare Oy started dredging and hydraulic engineering work for the harbour and cooling water intake structures. By mid-October, blasting works for the water intake and jetty area had finished for 2017, but were set to resume for another couple of months in the spring.

Work on a €10 million administration building was also underway. Fennovoima signed an agreement for the detailed design of the facility in October and aims to launch a tender next spring, for construction to begin in summer 2018. Once completed in early 2020, Fennovoima will prepare to move its headquarters from Helsinki to Hanhikivi.

While just one reactor is currently planned for Hanhikivi, an area of land has been reserved for a second unit, should the company decide to expand the project.

The cost of the Hanhikivi project is estimated at €6.7bn, and of this Forsström says roughly €2bn will stay in Finland with local consultancy and construction work. But Fennovoima has no specific target for project localisation. Fennovoima CEO Toni Hemminki told journalists that a quarter of the project cost would be provided by equity contributions from project shareholders, with the rest coming from debt financing by Rosatom. The first half of the financing package was agreed in 2015, but the second half remains under negotiation and is expected to be covered by Export Credit Agency guarantees and other sources.

The project is expected to have a significant impact on the national economy. Once in operation, the plant will increase the gross national product by over 0.25%, according to a study from VTT, Finland’s Technical Research Centre. The impact on the Finnish economy could reach €500 million a year, with Pyhäjoki region expected to receive €4.2 million in annual real estate taxes.

At the moment Fennovoima has 350 employees of over 20 nationalities, with around 30 staff located at the site. There will be maximum of 500 personnel once the plant starts operating. Forsström says that during the project over 25,000 workers are expected to pass through the training building, and up to 4000 people could be working on the project simultaneously during the construction phase. Fennovoima is upping its recruitment drive, but Hemminki says the company is not facing any significant recruitment or skills challenges at present.

Why does Finland need nuclear?

This year, nuclear is expected to account for some 30% of the electricity produced in Finland, according to Jorma Aurela, chief engineer at the Ministry of Economic Affairs and Employment. Finland has two operating nuclear plants: two 880MW boiling water reactors at Olkiluoto and two 488MW Russian-design VVER reactors at Loviisa, plus a 1650MW EPR unit under construction at Olkiluoto. Olkiluoto 3, which is being built by an Areva-Siemens consortium under a turnkey contract, was initially expected to start operating in 2009. But it has been hit by repeated delays and is now targeting regular electricity production in May 2019. The additional delay means that Finland will be facing two “hard winters,” Aurela says. Thankfully, the overall impact of the slowdown has been limited.

Over the last decade, Aurela says that Finnish electricity demand has fallen from around 90TWh to 80TWh. Meanwhile, electricity imports have risen to make up for the delays bringing Olkiluoto 3 online. As it stands, domestic energy production in Finland is not sufficient to cover the electricity consumption, and the country imports almost a quarter of its electricity from the Nordic market. The limited electrical transmission network means that imports cannot increase much beyond this amount. Plus, with Germany and Sweden looking to phase out nuclear power and the variability of hydro and wind energy in the region, there is potential for a shortage of supply during peak periods. There are also climate considerations.

Aurela confirms that Finland is committed to phasing out coal by 2020 and that the government is “strongly committed” to biomass. Finland has a target to achieve 30% of electricity production from renewables and biomass by the end of the decade, while hydropower is expected to continue providing 10-15% of the country’s electricity. Once Hanhikivi comes online after 2024, the share of nuclear power in Finland’s electricity mix could reach 40-45%, although this depends whether Loviisa 1&2 are licensed to operate beyond 2027 and 2030.

The access road is built 4.6m above sea level
The Hanhikivi peninsula will be transformed once construction of the nuclear plant is completed after 2024
Project participants
Updated schedule for nuclear regulatory activities in Finland (Source: MEE)
Post to: