The cold probe for sampling at Sellafield

Sellafield Limited and Swedish company FriGeo have joined forces to develop a self-sinking probe to sample radioactive sludge from the bottom of a five-metre-deep legacy fuel storage pond. The challenge posed was how to remotely collect samples of radioactive sludge up to 100cm deep from the bottom of the First Generation Magnox Storage Pond (FGMSP) at Sellafield, without disturbing the thick sludge bed or destroying the sample's characteristics.

The pond holds some 14,000 cubic meters of contaminated water containing Magnox spent nuclear fuel, an estimated 1200 cubic meters of radioactive sludges, as well as miscellaneous nuclear wastes and skips. The sludge is made up of algae, corrosion products and wind-blown material that have accumulated in the open-air pond since it was built in the 1950s.

"The greater our understanding of the sludge, the more opportunities we will have to accelerate decommissioning"

"One of the major challenges is to retrieve the sludge from the pond so we can get full access to all the fuel that needs to be retrieved," explains Steve Topping, deputy head of FGMSP programme. “In preparation for this, we're building up our knowledge of the sludge characteristics to help develop equipment for sludge retrievals. The greater our understanding of the sludge, the more opportunities we will have to accelerate decommissioning of this priority project."

With the constraints of Sellafield Ltd legacy buildings in mind, there is no technique commercially available to take samples from both the surface of the sludge and from specified depths. The sludge sampling technology currently available is crude and not able to securely retrieve an undisturbed sample of radioactive sludge at depth. This is hugely important to improve understanding of the sludge bed characteristics for mobilisation, encapsulation or regulatory requirements.

The answer involved the development of a probe that could be remotely lowered into the sludge where it could pick up a sample from a predefined depth without disturbing the material.

Over the last few years, a small team of Sellafield Ltd decommissioning engineers and scientists has been working in close collaboration with the Swedish company FriGeo on this engineering challenge. FriGeo specialises in artificial freezing/stabilisation of sediment or ground, a technology which used rapid freezing to solidify/stabilise an area of sediment for both dredging and salvage of objects, and from this was born the idea of freeze sampling.

Sellafield Ltd has been investigating a technical solution to collect radioactive sludge samples while preserving most of the sample qualities. Freeze storage is a common technique used to conserve samples collected by other techniques. However, slow freezing rates (<20 mm/h) and extended storage periods are more likely to degrade the sample. Fast freezing at lower temperatures potentially protects the sample integrity as well as the speciation pattern.

"The probe...operates at temperatures down to -40°C and the sludge sample is rapidly frozen onto the probe tip"

The concept of using a probe which fast-freezes a sample onto its surface means that the quality of the sample is likely to be preserved. There are no leaks, spills or dilutions and the sample can be easily recovered. Sellafield Ltd and FriGeo came up with the concept of using probes of different lengths to access and collect samples from a predefined depth in the sludge, which is up to 100cm deep in areas. FriGeo then pursued its idea of making a vibrating probe by borrowing technology from the construction industry. This vibrocore means that the probe is self-sinking, which helps to collect a sample from a predetermined depth. It operates at temperatures down to -40°C and the sludge sample is rapidly frozen onto the probe tip (in minutes), so importantly no sludge contamination drips from the probe when it is lifted out of the water.

Technical Manager Dr Xavier Poteau explains: "The concept has been proved-it works-and the spectrum has now been broadened to include core sampling rather than just surface sampling. The probe can be tailored to size and reaches the places other probes can't."

In 2011, Sellafield Ltd and FriGeo joined forces to work on a self-sinking sampler based on a freeze dredging concept. A sampling tool with combined freeze and vibration was designed to be capable of securely retrieving samples in consolidated sludge.

To prove the concept, the first phase of the trial was to see if a sample could be retrieved from a pre-defined depth in a test tank facility. Sample collection was by manual deployment using long poles lowered into the water. The challenges included getting the probe to a defined depth, securing the sample and retrieving the sample.

The trial demonstrated that sludge samples could successfully be collected from the unique conditions posed by the historic nuclear storage pond, albeit in a mock-up facility. This manual deployment confirmed the potential of the technique for use at Sellafield. The next phase involved adapting the process to deploy the freeze sampler using mini-submarine (ROV) capabilities in order to access all areas in the FGMSP. For this, the team focused on system integration, sampling turnaround, ROV manoeuvrability as well as probe and ROV design. Work started in April 2012, when autonomous sampling was re-developed with enough flexibility to be adapted for the ROV. In early 2013, a test tank trial was successfully carried out using a self-sinking freeze-sampling probe for ROV deployment. The team sampled a 40cm-deep sample.Trials are now on-going to validate that taking frozen sludge samples won't affect the sludge chemically or physically.

The sludge sampling test work has shown the potential of freeze sampling to take both surface and deep samples; depending on requirements, the probe can be insulated to only allow part of the sampler to freeze or it can be left un-insulated to retrieve a full core; tests have received cores up to 1m in length. Future development work will depend upon the drive to get the technology off the shelf and into operation, which will be influenced by the need for further sludge characterisation knowledge. The final phase of trials should involve focusing on the integration of the overall system in the FGMSP, which will include determining how best to provide the rapid freezing while considering the constraints of the facility and other legacy plants. The design finalisation and validation now needs to be completed, before a decision can be taken to start using the freeze technology to take samples and prove the concept in a legacy facility at Sellafield.

Freeze dredging is another option that is being considered by Sellafield Ltd. “We had a chance meeting with FriGeo at a trade fair and our collaboration has also developed what is basically micro dredging technology for the collection of radioactive sludges using a Remotely Operated Vehicle" (ROV), says Poteau.

Freeze dredging involves using a large plate, which could be attached to the ROV, and using it to freeze the remaining sludge at the bottom of the pond that is inaccessible to conventional sludge retrieval means. This could be particularly useful in difficult-to-reach areas, corners and in the bays between spent fuel storage skips, where the other options would be to pump it out or dig it out, both of which would disturb the sludge and impair pond water visibility.

"Freeze sampling could have extensive applications in the nuclear industry"

Although initially developed for the FGMSP, freeze sampling could have extensive applications in the nuclear industry. A broad range of materials could be sampled, including sludges, wastes, toxic material and contaminated oils.

“We have been delighted with the results so far and are quietly confident that this technology will be capable of doing exactly what it says on the tin and allow us to overcome the restricted physical access and dose constraints posed by the First Generation Magnox Storage Pond (FGMSP)," adds Poteau.

“Most importantly, this gives us access to a new technology for our toolbox and a potential way to secure the valuable knowledge we need to decommission some of the most hazardous plants at Sellafield."

Development work on freeze technologies is progressing and more work will be carried out on assessing the capability of freezing processes for sampling and dredging. Improvement of these technologies will take in consideration the wider potential use of these tools both on the Sellafield site and in other nuclear decommissioning projects. 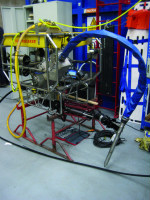 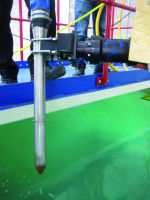 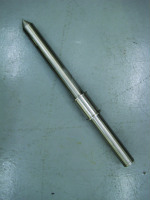