A new Monte-Carlo based statistical neutron activation estimation method was used to develop a three-dimensional activation map of the Biblis reactor containments to plan decommissioning. It showed activation levels lower than expected, saving on radwaste costs. By Imrich Fabry

For decommissioning projects, precise knowledge of the activity inventory, that is, the total quantity of radioactive plant components, is of the highest importance. Activation calculations carried out in the past have overestimated that figure - as much as seven-fold in the case of Biblis A. Decommissioning cost calculations at the time could only be made on the basis of rough assumptions, since neither the operating history of the plant, which was still in operation at the time, nor the exact switch-off date were known. As a result, they could not be used in calculations of component activation, even though the degree of activation depends to a large extent on these factors. Moreover, the calculations of the radioactive waste quantities were based on outdated methods. With the methods available at the time it was technically impossible to achieve activation estimates with the required accuracy. Furthermore, important physical effects could not be properly taken into account.

"A new computer software package simulates neutron transport...along the outer part of the entire reactor pressure vessel out to the coolant pipes"

A new computer software package simulates neutron transport - also known as the neutron streaming effect - along the outer part of the entire reactor pressure vessel out to the coolant pipes and further up to the reactor well. A fraction of the neutrons produced escapes from the reactor core. Some of these neutrons penetrate deep into the two-metre-thick biological shield and activate the reinforced concrete there; that is, it becomes radioactive. Using sophisticated statistical tools it is possible to reduce the number of neutrons to be simulated down to a level manageable by desktop PCs within a reasonable time. The results obtained from the Monte Carlo calculation satisfy the accuracy requirements demanded for such problems. This 3D computer model is the prerequisite for an 'activity atlas', which represents a type of relief map for the entire reactor.

“Thanks to the new 3D activation process we can achieve savings of up to 46% on cast iron casks in comparison to former calculations," says Peter Petrasch, project manager of the NIS decommissioning costs determination department. "The new calculation process guarantees the operators a higher planning reliability for dismantling." Because a much greater share of waste can be categorized at lower waste levels, which are less expensive to dispose of, this process could save €20 million.

Decommissioning of the Biblis A and B: scope

The scope was the planned decommissioning of the Biblis A and B PWRs due to the German energy turnaround (Energiewende).
The model covered the detailed geometry of all components that were activated, starting from the reactor pressure vessel with all its internals, to the biological shield, the coolant pipes (loops) up to the reactor well. Since other components or auxiliary buildings were not activated, it was not necessary to model them.

This amounts to a huge number of different materials, which all have to be considered and modelled with the correct atomic compositions, densities and masses. This is important, since the activity depends not only on the amount of neutrons passing through a material, but also on which type of nuclides are present within it. As different materials are activated very differently, they emit different types of radiation (alpha, beta or gamma), which dictates the number of transport casks, including shielding, that are necessary for decommissioning.

The modelling physicist has to decide which components are relevant and how to incorporate them into the model. Obviously, it is not necessary to model each screw, but on the other hand, the total mass of the system has to be conserved since this is relevant for the activity and has to be put into transport casks for decommissioning. High-resolution modelling leads to long computing times, since the calculations are done with the Monte Carlo method, which involves simulating the transport of neutrons through the entire geometrical system. These may be a challenge even for modern computer systems, so some components have had to be simplified.

As Monte Carlo is a statistical calculation method, it is necessary to generate a certain amount of transported neutrons in the simulation (typically several million), to reach the desired accuracy of the calculations.

NIS carried out activation calculations with the new 3D model it had developed in 2009, at Krško in Slovenia. The scope of the project was to plan for later decommissioning. As Krško is still operational, the final activation level could be calculated only by assuming a typical annual operation cycle, as it was necessary to extrapolate the operational history to the future.

The Biblis work, carried out in 2012, went into far more detail in modelling the 36 years of operational history of both reactors. All operational cycle and outage data, which ultimately determine the degree of neutron irradiation, were input using a custom-made interface.

“With the successful connection of the operational side to the decommissioning side in the activation calculation we are breaking new ground," says project participant Stefan Jaag, "Nobody has done this before us!"

Neutron flux data from core design calculations are used. These data are validated by measurements from common systems, especially in-core vanadium aeroball activation detectors. Structural inputs to the models include detailed technical plans and specifications of all components and the whole building, and the atomic composition of all relevant materials of the components together with their masses and densities (the masses may be calculated from the densities and geometrical volumes). Monte Carlo N-Particle Transport Code (MCNP) was the simulation software tool from Los Alamos, USA that was used, along with the SIMULATE and CASMO codes.

First, geometrical components were modelled in 3D based on the technical specifications, then the atomic composition of the materials were modelled. Fictive flux detector cells are then modelled and superimposed upon the geometry of the 25m-wide, 30m-high reactor buildings. In the model each reactor block is covered with nearly 100,000 such cells. These detectors consist of meshes whose composition is of variable size covering a small part of the component under concern. Next, a material and a mass is assigned to each cell element for the activation calculation that follows.

The mesh cells have variable sizes (generally tens of centimetres) and are chosen according to the size and the symmetry of the objects as well as the needs of decommissioning, where it is necessary to cut them into smaller pieces and pack them into transport casks. In this way, the dismantling and packaging strategy can be optimized and the number of transport casks minimised. Experience from decommissioning the Stade nuclear plant was used (and also served as a verification tool).

Finally, so-called 'variance reduction' methods were applied to the Monte Carlo model. These sophisticated methods ensure that enough neutrons are measured in each detector cell. Neutrons are 'biased' to hit a specific region of the 3D geometry, without altering the result of the calculation. Applying these methods ensures that the calculations have enough precision and saves computer time - which makes the calculation feasible. To apply these methods it is necessary to do separate calculation runs, usually four, depending on the region of interest. Since neutron transport occurs in three dimensions, modelling must be in 3D; previous calculations based on two-dimensional modelling have yielded incorrect activation estimates.

The computational effort of the Monte Carlo calculation is immense: a single standard desktop PC would have required a calculation time of nearly two years for a single reactor block. Thanks to parallel processing, it was possible to reduce the computing time to a few weeks. The calculations were done in-house on multi-processor computer clusters. The calculations for each unit were done for each annual cycle (about 29) plus a run for the reaction rates each using a single CPU for calculation. That gives 30 independent calculations. Each calculation run lasted about 6-7 days and the process was done four times to reduce variance (in order to have enough neutrons everywhere in the model). In total 720 CPU days' processing was used for each unit.

The results of the Monte Carlo calculations are neutron fluxes and reaction rates. Through custom-made software, these data were loaded into another program (ORIGEN) to calculate the activity for each mesh cell (representing a small piece of any component), in Bq/kg. This was done in each cell for each radionuclide present for intervals of 1, 2, 3, 5, 10 years, and so on.

The statistical uncertainty of the data ranges from = 1% near the core up to 5% in the middle of the bioshield. In the outer regions it is = 15%.

This data is stored in a database and is retrieved by data analysis software. Using a simple input routine, activity values can be shown for any location and cutout section within the reactor. In the next stage of development, the database will be coupled to a 3D activity visualisation tool, which will make it possible to zoom in on cutouts directly on the screen or view them from another perspective.

The result that the high spatial resolution of the degree of activation is able to accurately identify areas with particularly high levels of radioactivity ('hot spots'). Precise knowledge of the distribution of the activation within the reactor helps to minimise the radiation exposure of personnel carrying out decommissioning; it also offers greater decommissioning project planning reliability, which has a large savings potential. 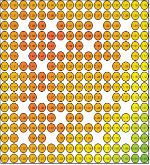 Typical power distribution in an operating nuclear power plant: representation of a reactor core with its 193 fuel elements.

One of the eight main coolant pipes at Biblis, each with a diameter greater than 1m. 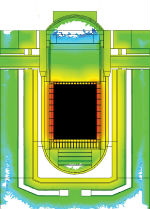 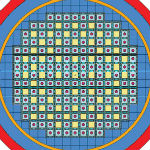 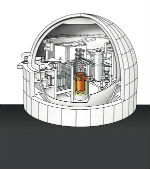 Presentation of the reactor neutron intensity distribution in a cut-out of the 3-D model of the upper reactor pressure vessel and the loop pipe.
Post to: