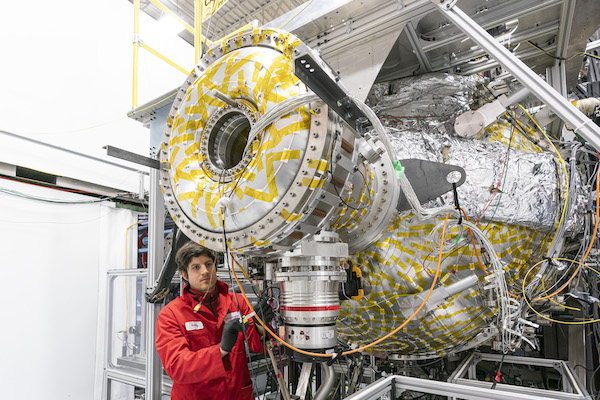 The race to commercialise clean fusion energy reached a milestone this year when General Fusion announced it will build a demonstration plant for its magnetized target fusion (MTF) technology. The plant will be used to verify that General Fusion’s MTF technology can create fusion conditions in a practical and cost-effective manner at power plant relevant scales. Construction is anticipated to begin in 2022, with operations beginning approximately three years later.

MTF competes with alternative fusion technologies like tokamaks such as the Joint European Torus (JET). Both need to heat and compress fuel to enormous temperatures to initiate fusion. Like a tokamak, an MTF reactor involves hot plasma contained by a magnetic field. But where the plasma fuel in a tokamak uses an external energy source to heat it, the plasma in an MTF reactor is superheated by being pressurised. This pressure is applied by pistons that coordinate to make a pressure wave.

The plasma is surrounded by a liquid metal ‘wall’. ‘Hot’ neutrons escape the plasma and are captured in the liquid metal. A heat exchanger extracts the energy which, as in other fusion designs, is converted to electrical power via conventional turbine generators.

In practice, in General Fusion’s MTF, this metal wall takes the form of a tank containing liquid metal, which is spun until a cavity is formed. Hydrogen plasma is injected into the cavity. The plasma is compressed and heated to more than 100 million degrees Celsius, and fusion occurs. The metal wall can be combined with liquid lithium to breed tritium within the power plant.

The Fusion Demonstration Plant (FDP) will be hosted by the UK Atomic Energy Authority (UKAEA) at its Culham Campus in Oxfordshire. It claims to be the first public-private partnership created to support a fusion demonstration that will be focused on delivering a complete power plant, rather than demonstrating the core fusion technology. General Fusion says the FDP will confirm the performance and economics of the MTF technology so the company can scale it to a commercial fusion pilot plant.

The key components of an MTF power plant are the plasma injectors, pistons and liquid metal vortex in a reactor with a central core just 3m in diameter. Currently, General Fusion is developing and optimising these components in parallel to accelerate construction of a demonstration power plant.

General Fusion says this practical approach will maximise the use of existing industrial technologies so there is a shorter timeline to move from technology testing to commercial deployment. The FDP aims to ‘set the scene’ for a commercial pilot plant by the early 2030s.

The company cites four advantages it believes will deliver the full benefits of fusion energy faster. They are:

Construction is scheduled to begin on General Fusion’s FDP in 2022, with operations starting in 2025. The FDP will be at 70% scale of the commercial pilot plant, with an estimated 3000t machine on a site around 11,000 square metres in area. At this scale, the FDP is claimed to be closer to a power generation plant than any other fusion energy prototype.

The FDP and commercial pilot plant will reach plasma fusion temperatures — more than 100 million degrees Celsius. Reaching fusion temperatures allows General Fusion to demonstrate the performance of the prototype using an approach that is extendable to a power plant.

General Fusion has partnered with engineering and construction firm Hatch to support the development and delivery of the FDP. This includes an investment by Hatch into General Fusion’s $65 million Series E financing round. Announcing the partnership, General Fusion chief executive Christofer Mowry said, “Success in commercialising fusion technology depends on strong engagement by stakeholders in the global energy industry.  Hatch is highly respected and capable. They understand the realities of power plant engineering and will help ensure we develop a practical and on-demand cleantech that finally enables the energy transition we are all talking about.”

Hatch brings power plant design, siting, licensing, and other specialised capabilities to the project and said it would triple its workforce from the current level of 140 employees to support the project and further develop the technology.

Showcasing fusion to the world

General Fusion’s FDP will showcase its technology to potential customers, such as utilities, who will provide insight on the FDP and the company will use this to optimise the commercial design to meet their needs.

The FDP building is designed by award-winning UK architect Amanda Levete to be ‘open, transparent, and inspiring’ to showcase fusion power’s potential for mitigating climate change. When visitors can be accommodated on the Culham Campus, environmental designs will include educational corridors with informative displays that capture visitors’ imaginations as they contemplate a clean energy future.

As the first private company to receive backing from multiple governments, General Fusion says it is creating new international collaboration models. Through its partnership with the UKAEA, it is expanding its market presence beyond North America into Europe, broadening the company’s global network of government, institutional, and industrial partners.

General Fusion is also proactively engaging the market to form a pipeline of early adopters. With this network, the company will gain valuable insight into the deliverables required of its technology to meet customers’ needs. 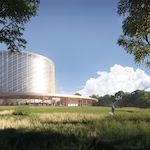