Now that most of the sodium coolant has been drained from the two Dounreay fast reactors in Scotland, a difficult job remains to remove the small amounts of inaccessible, but still hazardous, deposits

The primary coolant in the PFR was the first to be addressed (sodium being slightly easier to work with than NaK, as it is solid at room temperature and has slightly lower chemical reactivity). A dedicated sodium disposal plant (SDP) was constructed in the former PFR reactor turbine hall, and operated from 2004 to 2008 to process more than 1500 tonnes of sodium metal and a small quantity of NaK from the PFR. The SDP reacted small quantities of sodium with large amounts of aqueous sodium hydroxide which, following neutralisation with hydrochloric acid, produces salt water. The salt water passed through an ion exchange process (Cs-Treat) to remove traces of caesium-137 before it was discharged to sea.

To treat the NaK coolant from the DFR, a dedicated NaK disposal plant was constructed in the DFR sphere. This began operating in 2008 and last year (April 2012) completed its role to destroy 57 tonnes of primary (radioactive) NaK. An estimated 1000 trillion becquerels of caesium-137 was removed from the coolant during the chemical process, which again turned the liquid metal into 20,000 tonnes of salty water. Liquid metal was lifted in discrete 160 kg batches, the alkalinity neutralised with nitric acid, and the caesium extracted via ion exchange.

With the bulk volumes of sodium and NaK now removed from the reactors and dealt with, attention now turns to the material that remains within the reactors. In both cases this is extremely difficult to access, and treatment is therefore more complex than for sodium and NaK destruction projects to date.
It is estimated that around nine tonnes of residual sodium remain inside the PFR vessel, and a further three and a half tonnes of NaK estimated in DFR pipes and vessel. A number of pipes in the PFR were pierced when the sodium was hot and runny to allow optimal draining into a pool. It is now thought that a couple of tonnes of NaK rests at the bottom of the PFR pool in the shallow dished end, with some in the core catch tray directly underneath the reactor core, and the rest as a millimetre-thick coating on surfaces in the reactor.

The project to deal with this residual sodium/NaK presents numerous challenges, both those associated with dealing with alkali metals, and the radiological challenges associated with the high dose involved (up to 400 Sieverts per hour in the PFR core, and around 240 in the DFR).

Of the variety of techniques that could be used to address these issues with varying degrees of success and risk, the chosen approach is to treat as much of the sodium and NaK as possible in-situ. This minimises the hazards and risks associated with cutting into the reactors to remove the affected components. Also, although it has not been used before in the UK, it has been proven at other sites around the world in projects such as the Experimental Breeder Reactor II in Idaho, USA, of which the team has direct experience and knowledge of the processes, risks and safety issues to be considered.

Detailed development of the project methodology is now underway. Already it is clear that the project will involve a number of techniques. One method being looked at for targeted batches is to inject superheated steam (which is above water's boiling point to avoid any condensation) into an inert gas system at 340°C. In reacting with water, the alkali metal is converted into hydroxide, which at these temperatures remains molten and sinks through the molten sodium, leaving a fresh layer of sodium on the surface. Once the alkali metal has been converted to hydroxide the system is flushed with an acid solution to remove any residual salts. This approach has been tried and tested a number of times for single or groups of components, and has proven to be very controllable and safe. Key for superheated steam is that the process is fast. Application on a larger scale, however, can be more complicated, due to the difficulty of getting the entire system up to the high temperature required. Condensed water (pooling) is the biggest concern for all alkali metal, because of the risk of explosion. If the reaction does not stay hot enough, the molten hydroxide freezes and insulates the sodium from reaction with water, leaving the potential for uncontrolled chemical reaction of water and sodium at a later time.

An approach that does not require very high temperatures uses low-concentration wet vapour nitrogen (essentially nitrogen gas used as a carrier for small concentrations of water), which again reacts with the sodium in a series of 'bubbles and pops' to prevent the build-up of significant sodium hydroxide layers. Any hydroxides and salts are then flushed out of the system with water. In this case, the key to success is getting exactly the right balance to control the process without allowing a sufficient build-up of hydroxide crust, which shuts down the reaction, or a potential break-through of the hydroxide layer, which results in violent sodium and water reactions. Varying the concentration of water in the nitrogen changes the reaction rate, as does the WVN delivery rate. This system is inherently safe at low concentration, because the potential risk of pooling of free water in the system can be monitored by measuring the input of water into, and the output of sodium out of, the system. The rate of addition of WVN indicates the amount of water added, and hydrogen levels can be measured in the offgas. WVN is basically a slow delivery system, a variant of super-heated steam, that destroys alkali metal without having to guarantee that the system is kept hot.
A third approach, which was proven in the decommissioning of the Idaho Experimental Breeder Reactor II, uses water jets to spray a low-volume acidified liquid solution directly on sodium layers in the reactor, resulting in small controllable excursions and removal of the hydroxide layers. The acid promotes the reaction and reacts with hydroxide, preventing crusting. Once the sodium has reacted, the vessel is then filled with liquid and flushed. This has been shown to be extremely effective, although it again involves challenges, in particular the need for careful control of liquid dosing and monitoring to avoid large violent reactions.
Additionally, it is likely that some portion of the liquid (hot) alkali metal will be extracted and then treated in specific pressure vessels (using either the superheated steam or wet vapour nitrogen technique), if a suitable and safe removal method can be identified.

The optioneering phase to identify the exact methodology to be implemented for the PFR was completed in 2012, with designs sufficiently complete to enable skid systems for the selected treatment to be ordered. The skids are a way of combining the necessary components for making WVN or superheated steam, treating the offgas, treating the liquors and reacting the alkali metal in a modular form. The skids are brought together to form the desired processing system. They will be installed in 2014 for treatment of the PFR to begin in 2016.

Meanwhile, the optioneering phase for the residual NaK removal will be completed over the next two years, including characterization and system design, with system installation scheduled for 2016 (subject to removal of the fuel) and the NaK treatment to start in 2017. Treatment will only begin after the 1000 or so breeder elements from the DFR vessel, a number of which are swollen, split or stuck, have been removed. These elements could not be recovered by the original defuelling machine due to damage, so a custom retrieval system has been built. Some of these will need to be cut out of the reactor grid using tools on a deployment arm while others can simply be pulled out. If many are stuck, a contingency measure will be to deploy a further long-arm manipulator. The items will then be removed through an inert flask and then through an inert cell to wash off NaK, before being packed in a flask for shipment.

The treatment of both the PFR and DFR liquid metal will be followed by reactor and vessel sizing and ultimately building demolition in 2022 and 2023. The work is planned and will be carried out by the Dounreay Site Restoration Limited team.

Jason Casper is reactors project director at Dounreay. In previous roles, he led clean-up projects in Idaho in the US, and has experience developing and implementing new technologies for sodium treatment, waste monitoring and characterisation. 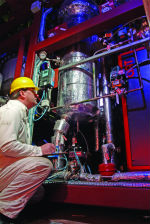