Gary Gleason speaks to the US industry about best practices and lessons learned for nuclear communications. During emergencies, information can be as important as food, water and shelter. But as nuclear communicators are finding, it is harder to get it right in the digital age. Or, rather, it is difficult to meet the public’s expectation of news that is both instantaneous and accurate.

“Social media changed everything,” says Cathy Autrey, emergency planning instructor with the Wolf Creek Nuclear Operating Corporation in Kansas. “For a while we went on with blinders like, ‘We’ll issue a news release, and host a news conference within two hours of the incident’, but in real world events we’re seeing it happen instantly.”

Often eye witness accounts emerge before incident response teams have even been notified. In 2015, for example, the Indian Point nuclear power plant had a transformer failure that generated a plume of smoke. Images went viral on social media with claims of a nuclear crisis. An aggressive social media response by the public affairs team helped Entergy contain the rumours at Indian Point, but it was a potent reminder about the impact of public perception.

“Communications and management professionals have to anticipate the messaging that will be required for likely incidents,” notes Walter Hill, communications director at the Nuclear Energy Institute (NEI), “And to the degree possible, have that messaging pre-scripted right down to 140-character tweets.”

According to Hill and others, pre-scripted messages and message mapping are essential tools in managing risk and crisis communications at ‘internet speed’. This is particularly true for nuclear facilities, where security issues are very sensitive. Understanding what you can and cannot talk about is essential for spokespeople, leaders and subject experts.

One of the tools being used by the US nuclear industry is a proprietary software platform called SimulationDeck, which we created at emergency management consultancy Nusura. The exercise delivery app mimics the Facebook, Twitter and YouTube media channels, giving players a way to practice developing situational awareness, managing rumours, and developing messages and talking points that can be adapted to real-world incidents in the future.

The speed of #SMEM

“The biggest change is the speed at which information now travels – not just social media, but also traditional media,” says Hill, who started his career in the aftermath of the Three Mile Island (TMI) nuclear accident. “In today’s environment you have to be ready to acknowledge a problem before you necessarily know what happened.”

This is where Hill says the industry has a real challenge, because “In my experience, nuclear engineers do not understand the speed of journalism.” Jan Bennett, communications specialist at Dominion’s Surrey plant, says, “You have to balance speed and accuracy. Plants err on the side of accuracy, and the public does not always appreciate that.”

The way to perform under fire, of course, is to study and practice in as realistic a manner as possible. Nuclear plants do a lot of that, from discussion-based to operations-based exercises, which assess operational as well as communications response capabilities.

“Just two years ago we were handing [exercise players] pieces of paper saying ‘you just read this on Facebook’,” Autrey says. Tools like SimulationDeck offer, “a safe place to practice media monitoring and analysis, social media listening and engagement, and to engage other local response partners in our exercises. It has opened our eyes to how our information operations will work.”

In addition to exercises, Autrey uses news conferences from major world events to help her team assess crisis communications hits and misses. One of the conclusions that emerged is, “If people lose faith in one of your spokespeople, they lose faith in the whole operation”. As a result, Autrey said, Wolf Creek works very hard at speaking with a unified voice. It providing one message via many messengers by coordinating them at the Joint Information Center.

There have only been two nuclear disasters that reached level seven – Major Accident – on the International Nuclear Event Scale. Those were Chernobyl in the then-USSR in 1986 and Fukushima in Japan in 2011. Because Chernobyl was before the Internet and behind the Iron Curtain, information was very limited and sterilised. Fukushima, by contrast, was virtually live-broadcast through YouTube videos, social media posts and a broader media and social media discourse.

“The profound lack of understanding about nuclear among the general public - particularly folks not living near a nuclear plant – was shocking,” said Holly Harrington, senior level advisor at the Nuclear Regulatory Commission (NRC). “There were people in mid-America sheltering in place following Fukushima, based on fear generated through untrue social media posts. We now recognise that an accident anywhere is an accident everywhere.”

In a report for the International Atomic Energy Agency (IAEA), researchers Christian Stieghorst and Gabriele Hampel said that people are much more likely to educate themselves during emergency events today. They believe that for nuclear communicators this is a huge challenge in terms of false experts and rumours, but also an opportunity for more detailed and more interactive content than was possible in traditional media channels. Communications professionals acknowledge that it is also a huge monster to feed.

“Fukushima showed us that we have to be ready. Even though it was on the other side of the world, the disaster may have been right in our back yard based on the media and social media response,” Hill says. NEI and its risk communications working group has been actively working on the issue since then.

TMI – where it all began

While Fukushima has refocused the nuclear industry on the role of social media in nuclear incidents, according to Hill nuclear risk and crisis communications in the USA was really launched by the 1979 accident at Three Mile Island in Pennsylvania.
“TMI was really the start of it. The industry did not appreciate that an emergency of that magnitude was even conceivable. There were not really plans to respond technically, nor from a communications standpoint,” Hill says. “As a consequence, the NRC ended up leading the communications effort. The contractor running nuclear operations at the time, GPU, basically ceded its responsibility for the accident response to the regulator. In the aftermath the industry realised that was not acceptable.”

Since then the NEI, the NRC, the Institute of Nuclear Power Operations (INPO), and the Federal Emergency Management Agency (FEMA) have each taken on elements of the US nuclear preparedness programme. NEI has taken the lead on public affairs with its public affairs task force, which has been active since 2011, and it was pivotal in organising the industry communications response to Fukushima.

Harrington says her team at the NRC now has pre-scripted messages about common rumours, and a web page in the style of fact-checking website Snopes.com, through which to distribute verified information.

“We’ve learned that social media is a blessing and a curse. We now have multiple platforms to communicate to the public so we are much less dependent on the media picking up our stories. On the other hand, there is a lot more room for rumour, misunderstanding, error,” Harrington says. “It gets spread very quickly and is difficult to stamp out.”

In this age of fake news, driving traffic to verified information sources may be the next great challenge for risk and crisis communicators. New modelling and simulation tools are critical to bridging that gap.

Gary Gleason is a former member of FEMA’s national emergency response team (ERT-N), a Type II Fire Information Officer, a Fulbright Scholar in Civil Protection, and a nationally recognised subject matter expert in risk and crisis communications. He can be reached at [email protected] 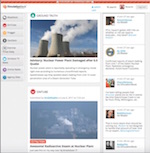