D&D work at Zion has focused on wet cutting of reactor internals. While upper internals were size-reduced, underwater tooling cut out the lower internals. By Conrad Cooke and Holger Spann

Siempelkamp Nuclear Services Inc. (SNS) is contracted to perform the segmentation and packaging of the Zion Nuclear Power Station reactor vessel internals (RVI) and reactor vessels (RV). Zion is a two-unit Westinghouse pressurized water reactor (PWR) facility that has been shut down for approximately 15 years, and is located on Lake Michigan in the city of Zion, Illinois between the cities of Chicago and Milwaukee. Each PWR had a generation capacity of 1040 MW. The first unit started power generation in 1973 and the second unit came on line in 1974; both served Chicago and the northern quarter of Illinois. The operation of both reactors ceased in 1996/1997. In 2010 the US Nuclear Regulatory Commission approved the transfer of Exelon Corporation's license to ZionSolutions, the long-term stewardship subsidiary of EnergySolutions responsible for the decommissioning of ZNPS. In October 2010, ZionSolutions awarded SNS the contract to plan, segment, remove, and package both reactor vessels and internals.

During operation, the RV and RVI became so irradiated that removing them requires segmentation by remotely-operated equipment.
SNS decided to use a two-step segmentation approach. The first step was to cut, segment and package the RVI with mechanical segmentation processes including milling, drilling and sawing. The tools for internals segmentation were designed by SNS using its experience from other successful reactor and large component decommissioning and demolition (D&D) projects in the US. The designs cover the mechanical segmentation of the internals remotely in the water-filled reactor cavity.

Time is essential. These words are important in each D&D project. So SNS had to find a compromise between labour costs, shifts, and interactions with other decommissioning activities to find an optimal sequence for both RVIs and RVs. SNS decided to segment the RVIs of both units in a sequential order (starting with unit 2). During the segmentation process at unit 2, the mobilization for the RV segmentation at unit 1 was to start. The work at unit 1 was also planned to begin using some of the working crew in unit 2 as their RVI responsibilities were completed, helping to minimize labour costs.

The SNS approach is to segment the RVI and the vessels of both reactors in approximately three years. This is a challenge. Success depends on the performance of the Siempelkamp team, the successful operation of the tools and also close cooperation with ZionSolutions [1]. Lessons learned in the unit 2 segmentation efforts will be applied to optimize the implementation of our segmentation processes in unit 1.

The conceptual approach developed for the Zion RV and RVI segmentation took advantage of experience and lessons learned obtained on several reactor decommissioning projects, including Rancho Seco, Fermi and the Carolinas-Virginia Tube Reactor (Parr). There are four specific segmentation tools [2]:

¦ Volume reduction station (VRS): Once the upper and lower internals are removed from the RV, further segmentation and volume reduction is necessary in order to package the materials in acceptable low-level waste disposal containers and greater-than-class C (GTCC) canisters. The VRS employs a circular milling saw and a reciprocating milling saw to segment the upper internals, upper and lower core plates, core barrel sections and thermal shield sections. The VRS includes a cutting platform capable of supporting reactor components up to approximately 54,000 kg. The platform can rotate 360° and can move the components forward and aft 36 inches in either direction in order to position the component for segmentation at a fixed saw position.

¦ The Bolt Milling Tool (BMT): This tool is designed to remove the bolts that fasten the baffle plates to the baffle former plates.

¦ Former attachment severing tool (FaST): This tool is designed to remove the baffle former plates from the core barrel.

The RVI at Zion consist of two assemblies which are designed to be removed from the RV. The upper internals (UI) weigh approximately 50,000 kg; the lower internals weigh approximately 120,000 kg. The following procedure reflects the sequence performed on unit 2. The process starts by lifting the upper and lower internals with their existing lifting devices. The UI were placed on a fixture designed to present them in a horizontal position, and the lower internals (LI) were positioned on the LI stand. The UI was laid on its side and placed on the VRS for segmentation.

The process of alternating FaST and C-HORCE cuts continued until all of the LI was segmented. The resulting core barrel and thermal shield rings were staged and later volume-reduced into segments necessary for packaging into disposal liners after the UI segmentation was completed.

One of the primary goals is to minimize the cost of waste disposal. Accomplishing this required the optimization of the packaging of the primary waste (waste resulting from segmentation of the RV Internals and the vessel itself) and minimizing secondary waste. Secondary waste comes from cutting materials (saws, end mills, wire, etc.), filters, ion exchange media and activated carbon, cutting and support equipment, and dry active waste.

In general, waste in all three classes (A, B/C and GTCC) accumulated from the segmentation process. The priorities for waste management include loading all GTCC waste within the available numbers of canisters, minimizing Class B/C Waste, and disposing of the remainder as Class A waste.

Primary waste generated from the work can be divided by waste type and is expected to amount to between 464-482 m3 (Table 1). In addition, the total amount of secondary waste is expected to be approximately 600 m3.

During the last 12 months numerous opportunities have arisen that have added to SNS's experience. We would like to mention two challenging issues where we see a high potential for improvements for the segmentation operations at unit 1.

First, when we started using the BMT to mill 1232 bolts, the BMT did not achieve the performance we expected due to a combination of operational and design issues. After a few design changes and modifications (retrofitting), performance and reliability increased, allowing completion of the effort. Nevertheless, SNS decided to build a second BMT, reusing only the vertical rails, with some design changes to increase productivity in unit 1. These design changes were discussed with the Siempelkamp group in Germany.

Second, as mentioned earlier, the segmentation process was performed remotely in the water-filled reactor cavity. During the use of the BMT we struggled with water clarity. For several weeks poor clarity prevented working in the water-filled cavity. The issues encountered during this period included loss of glycol from the hydraulic power unit, algae bloom, hydrogen peroxide addition, dramatic pH changes and high levels of suspended solids, and colour shifts (darkening) of the water through dissolved solids. Ultimately, controlling of the pH, high volume filtration, and mixed bed ion exchange/ activated carbon water processing at lower flow rates returned clarity to the water. A loss in schedule was caused by being unprepared to apply these remedies quickly.

After the successful segmentation, removal and volume reduction of the RVI, the next step, scheduled to start summer 2013, is to segment the RV using a thermal cutting process new to the United States through a co-operative effort with Siempelkamp NIS Ingenieurgesellschaft mbH using its experience gained at the Stade NPP and Karlsruhe reactors in Germany. This thermal cutting will take place in a dry vessel and cavity. 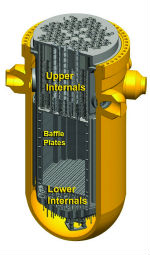