Reactor models on show in China All of the major nuclear players were in attendance at the Nuclear Industry China Expo 2014, and the favourite accessory on the glamorous stands on show were 3D cutaway models of reactors; some completed, others under construction, others only planned. Generally the models were not overly complex, but had lots of vivid colour and lighting effects.

Below are the some of the best.

The three loop, 1000 MWe reactor has been designed for export. Emergency features include a high-mounted water-tank-based heat exchanger for emergency reactor cooling, plus an emergency core spray and other water injection systems. Shown on the CNNC stand.

Sandwiched between reactor building and turbine hall is a seven-storey process building. Started generating power in 2011, at a China Institute of Atomic Energy site near Beijing. The 65 MW reactor is a sodium-cooled, pool-type reactor. Shown on the CNNC stand.

CGN's ACPR-100 appears to be an integral SMR and is planned for Putian.

R&D is completed; the Ministry of Environmental Protection said that it meets requirements; it is ready for commencement, according to CGN. There is also a marine version: the ACP100S.

On Huaneng's stand was the HTR-PM. Colour-coded flows in the HTR-PM currently under construction (civil works are apparently out of the ground) at Shidaowan. The helium-cooled pebble-bed core is at the centre, with steam generator at low flank.

CAP1400 is a two-loop configuration with two cold legs per loop. Innovations claimed include a redesigned containment vessel, increase from 157 to 193 fuel assemblies in core, redesigned steam generators, redesigned primary pipework and RPV.

China Power Investment Corporation (CPI) showed several small AP1000 models; in this one a steam generator being changed. CPI has a stake in Haiyang, Shandong province, currently under construction.

The IHNI-1 is a 30kW medical reactor with 12.5% U-235 core of 302 fuel rods, light water as coolant and moderator, and beryllium as reflector. Fission heat removed by convection.

Model of the HTR-PM reactor under construction in China 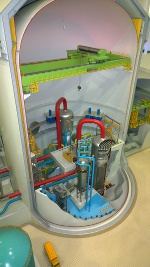 Model of the Chinese CAP1400 reactor design, which is due to begin construction in 2014 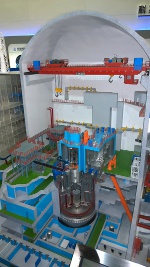 The IHNI-1 is a 30kW medical reactor
Post to: