A bench test of part of a simple reactor with only six components was successfully completed in September 2012. The test, part of a slimmed-down research project, aims to create a simple source of satellite electricity based on an HEU-based fast reactor.

The last time the US space programme developed nuclear reactor technology that actually made it into space in the 1960s, (see box)the total bill was $850 million in 1973 dollars. This time, researchers plan to develop viable space technology for a fraction of the cost by using well-proven components.

"We were trying to get people interested," said project lead Patrick McClure. "Their impression is that it is too expensive to try. We are using this method to show that it is cheaper, faster and easier than previously thought." The effort took only six months and $1 million in funding. The next step is to re-run the experiment, but at actual temperatures; testing a prototypical design would be next. They estimate it will take a couple of years to prepare for, after -- and if -- they receive the $10 million in funding they need. A NASA funding decision was expected in late February, after the magazine went to press.

Deep-space satellites need a source of electricity to power sensors and transmitters. NASA has found that beyond the orbit of Mars, the sun's light is too weak to power solar panels.

Most recent satellites have used radioisotope-based generators based on Pu-238. These use decay heat to power thermoelectric converters at an efficiency of 5-7%. Pu-238 is a byproduct of the US nuclear weapons programme. Now that weapons production has ended, stocks of this daughter product are not being replenished, and Russian producers are no longer selling it to the USA, so NASA has been working to develop more efficient means of powering satellites to conserve what Pu-238 remains.

One of the first results of this is the space qualification of Stirling engines in NASA's Advanced Stirling Radioisotope Generator programme. Stirling engines, invented in the early 1800s, exploit a temperature differential to create cycles of expansion and compression of a working fluid to do work; in this case, to push a magnet on hydrostatic gas bearings through an electromagnetic field, which is then converted to DC. A Sunpower Stirling engine has been demonstrated to convert 38% of thermal energy to electricity with a hot end of 850°C and cold end of 90°C, and is being qualified for a 14-year design life.

The technology to carry heat to the Stirling engine was originally invented at Los Alamos National Labs. These so-called 'heat pipes' are sealed tubes containing a fluid and a wick. Heat on one end causes the fluid to boil and evaporate. That gas travels to the cold end, where it condenses; the pressure decrease sets up a convection current. The wick draws the pool of liquid at the cold end back to the hot end by capillary action, and the process carries on. The thermodynamic efficiency of phase change (liquid to gas, and back again) enables a means of heat transfer that is orders of magnitude more efficient than conduction, and according to LANL is commonly used in consumer devices such as computer laptops. In the satellite, the working fluid would be most likely sodium, in a quantity of some tens of grams. Like other alkali metals such as lithium and potassium, sodium has been extensively studied at LANL, and conducts heat well.

Finally, the neutronics behaviour of the 93% HEU core has been well-characterised by weapons research. Since fast neutrons have a smaller fission cross-section than thermal neutrons, their capture behaviour is easier to characterise, even if it is less thermally efficient. The core design has an inherently high negative temperature feedback coefficient, which means is generally self-regulating after a period of oscillation, and will follow the Stirling engine power demand. A decrease in heat loss through for example the loss of a Stirling engine would increase the core temperature, which would in turn tend to depress reactivity. Although the system may not use all of the possible energy generated by the reaction, its theoretical life runs into thousands of years; burnup after a 15-year mission would be only 0.1%.

In the current spacecraft design plans, 27kg of HEU would be cast into the shape of a hollow cylinder 11cm across and 20 cm long, inside which would be threaded a 4.4cm boron carbide (B4C) rod to prevent criticality (Figure 1). This assembly would be inserted into a 16cm-diameter conical high reactivity-worth beryllium oxide reflector. The ends of eight steel alloy heat pipes, 13mm in diameter, would be fitted into tubes drilled deep into the body of the reflector. They would then pass through three layers of alternating lithium hydride and depleted uranium radiation shielding to protect spacecraft electronics. Their far ends would connect, probably by press-fitting, to the outside ends of the tubular Stirling engines, four of which are arranged in a cross arrangement. The cold ends of the Stirling engines are connected to long radiating fins for cooling. Although deep space is extremely cold (2.7K), effective radiative cooling requires atoms to carry away heat, atoms that are unavailable in a hard vacuum).

After launch and at some point long beyond earth orbit, ground control would send a signal to the spacecraft, which up until this point has been powered by batteries, and an electrical stepper motor would start to rotate the boron carbide rod to unthread it out of the reactor core so the fission reaction would begin. There are no plans for the fission reaction to be stopped again. It is planned that the reactor would raise the temperature of the heat pipes' hot end to about 800°C. With eight or ten such heat pipes, the total thermal power generated is between 3-4000 Wt, which the Stirling engines could turn into between 500-1000We. This amount of power is larger than the power generated by thermoelectric generators, and can be used to power extra spacecraft sensors and transmission equipment.

In September, researchers demonstrated that they could generate electricity from a radioactive source, by exposing one end of a heat pipe fitted to a Stirling engine to an HEU source in a US weapons testing facility. (Earlier experiments by researchers used non-radioactive electrical heating to test the heat pipe and Stirling engines). The Flattop Critical Experiment, which dates back to the 1940s, consists of a 17kg HEU spherical source surrounded by a sphere of natural uranium shielding, with a few half-inch (12cm) instrument penetrations. Into one of these penetrations researchers put one end of a 1.1m-long water-filled heat pipe, the other end of which fitted into a copper block that linked to two 'Buzz' Stirling engines. The experiment ran twice in September 2012 with a fast and slow ramp-up on reactivity insertion; both times generated electrical energy (Figure 2). In some ways the experimental setup was not ideal: high-temperature tests were deemed too risky for the experiment, so the heat pipe temperature was limited to 300°C; the shielding acted as a heat sink and made it difficult to raise the heat pipe temperature; and facility personnel limited the duration of the tests to prevent irradiating the room of the experiment, which is not otherwise shielded.

Researchers hope to return to the laboratory in a few years to run radioactive tests at the same facility at a higher planned operating temperature using heat pipes filled with sodium, and run it for a longer duration (hours). Doing so would require preliminary tests of sodium-filled heat tubes, and manufacture of an HEU core at Oak Ridge National Lab and cross-country transport, as well as completing the required facilitating regulatory applications. Following that, they would look to build a full-scale prototype for flight qualification, with multiple Stirling engines, to operate in a vacuum chamber durations of days. So far, the project has taken about a year and involved part of the time of about 18 full-time staff: 12 at Los Alamos National Laboratory including lead Patrick McClure, six from NASA's Glenn Research Centre, and assistance from the NNSA's facility operations team.

LANL calls the project a stepping stone of reinvigorating work on nuclear reactors for space. This design could be scaled up for larger-power applications, such as powering ion thrusters for spacecraft propulsion, or for surface power on Mars. 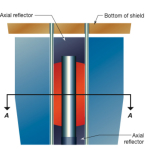 Figure 1b: Diagram of reactor from above 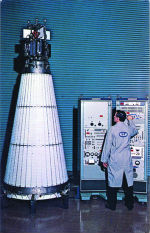