The electromagnetic acoustic resonance (EMAR) method provides accurate and stable evaluation of thickness of pipes, regardless of geometry. Demonstrated at unit 2 of the Tsuruga nuclear power plant in Japan, it has the added advantages of being non-contact, relatively easy to use and enabling a reduction of inspection time. By Toshiyuki Takagi, Ryoichi Urayama, Toshiaki Ichihara, Tetsuya Uchimoto, Taku Ohira and Takayoshi Kikuchi

In piping systems of nuclear power plants, pipe wall thinning is caused by ageing-related flow-accelerated corrosion (FAC) and liquid droplet impingement (LDI) erosion. Piping maintenance is based on residual lifetimes estimated by periodic measurements of thickness. High accuracy and reliability of these measurements are mandatory in the nuclear power industry. Currently, ultrasonic (UT) thickness gauges are used to inspect pipe wall thinning [1]. Although UT thickness gauges provide measurements with high accuracy of about 0.1 mm, these are sensitive to surface rusts and paint, and require highly skilled workers to operate

Electromagnetic acoustic transducers (EMAT), which is one ultrasonic measurement method, provide non-contact measurements, since ultrasonic waves are transmitted and received electromagnetically [2]. For this reason, the method is often applied in high-temperature environments [3-5]. The drawback of EMAT is its low electromechanical conversion efficiency, which leads to low sensitivity and low signal-to-noise (S/N) ratio. One of the ways to overcome EMAT's drawback is to introduce an electromagnetic acoustic resonance method (EMAR) [6]. Since the principle of the method is based on the through-thickness resonances of bulk waves, that is, thickness oscillations, targets are usually limited to ones with simple geometry such as plates. The authors have proposed a signal processing method, called the superposition of nth compression (SNC) method, to extract thickness of pipes with wall thinning from EMAR spectral response data. This method was applied to a measurement of piping cut from a mock-up test loop, and the high capability of evaluating thickness was confirmed [7].

The typical EMAT consists of a coil and a permanent magnet. When a radiofrequency pulse current is applied to the coil placed on a nonmagnetic conductor specimen, an eddy current is induced near the specimen surface. When a static magnetic field perpendicular to the specimen surface is further introduced by the permanent magnet, an Ampere force parallel to the specimen surface is generated and a transverse wave having a frequency equal to that of the radiofrequency pulse applied to the coil propagates through the specimen. In the case of a magnetic material specimen, its dimensions change cyclically due to the magnetostrictive effect caused by the magnetic field induced by the coil and the static magnetic field induced by the permanent magnet; ultrasound waves are emitted as a result. Reception of ultrasound waves is conducted in a reverse way by detecting the voltage generated in the coil.

Because the sources of vibration and reception exist within the specimen surfaces, it is possible to conduct non-contact measurement. Therefore, a contact medium, which is required in ultrasonic thickness gauges using piezoelectric devices, is not required. In addition, EMATs are less susceptible to coating and rust on specimen surfaces.

An ultrasound burst wave that enters a specimen is reflected repeatedly on both ends of the specimen. When the wavelength is an integral multiple of the propagating distance in the specimen, the phase of the incident wave matches with that of the reflected wave and resonance occurs. The EMAR measurement method uses this phenomenon to improve the signal-to-noise (SN) ratio of the received signals by amplifying echo waves whose amplitude has been attenuated by scattering.
The relationship between resonance frequency f and specimen thickness d is given by: (1)

Figure 1 shows a simulated wall-thinned specimen made of carbon steel SS400. The bottom surface of a plate 150 mm long, 50 mm wide, and 10 mm thick was processed two-dimensionally to form an R-shaped dent 2 mm deep and 70 mm wide as a simulated thinned wall. The sound velocity is 3240 m/s at room temperature.

As shown in Equation 2, the fundamental resonance frequency f1 is obtained from the maximum value of the average intensity of the spectrum obtained by superimposing the frequency results obtained by EMAR measurement and then reduced by a factor of n. Then, conversion from sound velocity to specimen thickness is conducted using Equation 3. The maximum spectrum intensity so obtained is treated as the peak SNC value. Here, x(f) is SNC spectrum intensity and m is the number of superimposed resonance orders.

In the online monitoring test, sound velocity is determined using a calibration specimen whose material type is the same as that of the pipe under investigation. The estimated wall thickness is necessary to decide the range of resonance frequency orders in each SNC evaluation. Hence, the estimated wall thickness used in the SNC analysis is the nominal thickness for the first round of test and the thickness measured at the (x-1)th round test for the xth round test.

Figure 3 shows the result of SNC analysis applied to EMAR measurements on the simulated wall-thinned area shown in Figure 2. The analysis assumed an estimated thickness of 8 mm and the range of orders n=8 to 17. The spectrum shows multiple fundamental resonance frequencies, indicating a variation in the bottom surface shape. The thickness value of 8.28 mm corresponding to the maximum-peak resonance frequency (195.7 kHz) is regarded as the wall thickness of the specimen.

The pipe wall thinning test equipment allows testing of pipe wall thinning under a single-phase or two-phase flow environment by simulating the water flow conditions of a nuclear power plant [8]. Figure 4 outlines the setup of a test pipe whose features cause fluid turbulence in the test pipe, accelerating wall thinning.

A simulated wall-thinning test that generated a two-phase flow in the test pipe to accelerate wall thinning was conducted. (In a second test, excluded from this article, a single-phase flow with different amounts of dissolved oxygen was generated). The fluid temperature in the pipe was 165°C, which is within the temperature range where pipes are susceptible to flow-accelerated corrosion. The pipe of the test section was wrapped in insulating material and enclosed in a metal protector, and the pipe and the fluid in the pipe had the same temperature. EMATs were installed directly on the pipe surface without peeling off the surface coating. Each EMAT was held by the magnetic force of its permanent magnet and was secured in place with wire so that it would not get misaligned by any accidental contact caused by such as installing and removing insulator material.

Figure 6 shows the change of pipe wall thickness with time evaluated by EMAR under a high-temperature environment during the operation of the pipe wall thinning test equipment. The thickness measured by EMAR in the first round was 5.42 mm and that measured in the last round was 5.24 mm, resulting in a thickness reduction of 0.18 mm. During the measurement period of 58 days, the thickness was reduced at a rate of 3.0 µm per day. After the completion of the test, the test pipe was cut out and its cross section was measured under a microscope. The wall thickness at the location where the EMATs were installed was 5.18 mm, which means a difference of 0.06 mm from the final thickness measurement by EMAR. The difference, probably caused by measurement inconsistencies, is within the allowable range, as compared with the error of ± 0.1 mm in the ultrasound thickness gauge.

Figure 7 shows the initial spectrum obtained by SNC analysis and that obtained 30 days later. Compared with the former SNC spectrum, the latter shows a shift of resonance frequency to the higher side, a reduction in amplitude, and an increase in the number of peaks. This indicates the occurrence of unevenness and slope on the inner surfaces of the pipe. It is considered that the change in the bottom surface shape caused ultrasound scattering, which resulted in decreased amplitude and multiple peaks.

In this study [9], we used EMAR to measure pipes of the secondary cooling system of unit 2 of Japan Atomic Power Company's Tsuruga Nuclear Power Plant. The power plant is a pressurized-water reactor that started commercial operations in February 1987. Measurements are done during the reactor outage for periodic inspection. We extracted eight test sections from the plant as targets for EMAR measurements: four straight pipes and four elbows. The purpose of including both elbows and straight sections of piping was to assess the effect of pipe geometry on measurements. In addition, the tested sections include those in long-term service to evaluate effects of advanced thinning. There were a total of 195 measurement points.

UT is performed by a qualified person before the EMAR measurements. We compare the results obtained with EMAR with those obtained in UT.

In summary, EMAR inspection results have shown good agreement with those of an ultrasonic thickness gauge. In addition, as a non-contact measurement method, EMAR decreases measurement times of pipe inspections in nuclear power plants. Our technique of EMAR with SNC signal processing was validated through two applications in relevant environments, and so is positioned on level 5 of the technology readiness level scale: it still requires prototyping and qualification before it can be used in the field. ¦

This study was performed as part of "Project on enhancement of aging management and maintenance of NPPs" supported by Nuclear and Industrial Safety Agency, METI, JAPAN. This study was also supported by Tohoku University Global COE Program, "World center of education and research for trans-disciplinary flow dynamics". The mock specimen was provided by the Tokyo Electric Power Company. The authors would like to thank Mr. Takeshi Sato and Mr. Tsutomu Watanabe of the Institute of Fluid Science, Tohoku University, for the preparation of the specimens and the fabrication of the probe. 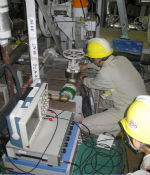