A project to install digital instrumentation on key valves at the Pickering nuclear station in Canada has improved plant reliability and reduced costs. By Bill Fitzgerald, Michele Cheng-Newson, and Franco Mercaldi.

Ontario has a long history with nuclear power, and over 60% of the province's power comes from plants at Bruce, Darlington and Pickering.
Pickering nuclear generating station is an eight unit facility located just east of Toronto in Ontario, Canada. Only six of the reactors are operating at this time. It is owned and run by Ontario Power Generation (OPG).

All of the reactors in Toronto are based on Candu technology and each has a power capacity of 515MW. Candu reactors use heavy water as a moderator and unenriched natural uranium fuel. In addition to Canada, there are Candu units operating in India, Pakistan, Argentina, South Korea, Romania and China.

Why opt for a digital upgrade?

Plant management at Pickering was faced initially with some equipment obsolescence issues on instrumentation on critical control valves in their operating units. The current to pressure transducer, (I/P) a Fisher type 546, used on these valves is a relatively old design, and it is getting harder to support these types of products. They can be costly to maintain, and their performance does not match that of more modern digital instrumentation devices.

Pickering began to look for an alternative device that would be more up to date, better performing and cheaper to maintain. Since many of the valves in question were considered safety significant valves, not just any device could be used. The team at OPG had to be sure that whatever they picked would not negatively impact the overall safety and reliability of the plant. That led them to the Fisher Fieldvue™ digital valve controller, which combines the current-to-pressure function of the type 546 with the functionality of a valve positioner.

Digital instrumentation like the Fieldvue device first came on the scene in the process industries about 20 years ago, and have seen extensive use outside the nuclear industry. In fact, current estimates suggest over two million of the devices are installed on critical valves around the world. But the take-up in nuclear has been much slower, because of concerns about proving the reliability of these devices and different failure modes in nuclear applications, and because changing to new devices on safety significant valves involves a lot of effort to prove that the design basis for the plant will not be affected by the change.

With these challenges in mind, the Electric Power Research Institute (EPRI) put together some guidelines governing the qualification and use of digital instrumentation on key valves in nuclear power plants. The Fisher digital valve controller was run through this audit process by an EPRI team, and was judged to be acceptable for nuclear use. Based on the EPRI programme, Pickering selected the Fisher digital valve controller as the device of choice and was able to replace two devices (the I/P and the positioner). That simplified the control schematics and things like training.

The EPRI programme and extensive testing by Fisher demonstrated to OPG that the new device was more reliable than the two devices it was replacing. So they addressed equipment obsolescence and improved plant reliability at the same time.

Once OPG had settled on a device, it began to look at the valves that would need to be upgraded. It selected valves that had a direct impact on safety and reliability, and "money valves"- or those that affected the output of the plant. The list of applications is shown in the table, and the result was 52 different valves each on units 5, 6, 7, and 8.

The digital valve controllers on all four units are fully installed and operational, and many benefits have been realised.

The plant is using the units to conduct online condition based monitoring through the AMS architecture depicted in Figure 2. The digital signal showing valve operating condition is stripped off the twisted pair coming in from the field and displayed on a separate monitor, so that the maintenance crews can look for signs of impending problems and address them before they become too serious and shut the process down. They can do this without having to go out into the field.

Reduced trips to the field means lower radiation exposure, and reduced risk of body mechanic injuries due to improved working conditions. If workers can diagnose equipment remotely, there is no need to go into containment and test equipment, so cleanup and waste products are eliminated.

The maintenance backlog has come down, because of the speed with which problems can be diagnosed and solved using the technology. Preventive maintenance interventions have also been reduced with the advent of condition based monitoring on the valves.

The digital devices can be "tuned" to the application at hand, making response very fast but very stable, ensuring that process control performance is optimised.

Equipment is put back into service more quickly and in a condition that is consistent, repeatable, and auditable due to the electronic "as-left" signatures on the valves.

OPG has been able to streamline processes and schematics, which reduces setup time and expense.

As a result of the upgrade, Pickering will be able to meet new requirements associated with Canadian Nuclear Safety Commission (CNSC) S-210, without having to expend any additional man-hours on these valves. The CNSC S-210 mandate requires as-found valve diagnostic traces, which can greatly add increase the maintenance burden on a nuclear plant.

Finally, OPG has been able to reduce the number of unique instrumentation devices used on the valves, which simplifies training and leads to inventory reduction - a big boost to the bottom line.

Overall, the project went very well, and delivered on the original justification goals.

Lessons learned included the need to keep the same stakeholder team together over the course of the contract to ensure a consistent approach to decision making. The team also discovered deficiencies in record-keeping. They could not assume, for instance, that they had six valves on a given application that are identical, just because the paperwork says they are. They had to do a walk-down to ensure that they have an up-to-date description of the current state of the valves that they plan to retrofit. Finally, they identified a need to further improve planning.

While implementing digital technology in a nuclear plant can be challenging, the team at Pickering has demonstrated that if you do your homework, it can go very well. And the improvement in performance in a fleet this size provides for a very quick payback.

Bill Fitzgerald is VP of Nuclear Services in the Fisher Business Unit of Emerson Process Management. He is considered an expert on control valves in the nuclear industry. 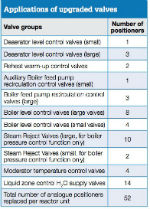