The US Department of Energy’s Idaho National Laboratory (INL) has given a new lease of life to an ageing research reactor used for nuclear fuel testing and materials research, with a 14-month upgrade programme. By Thecla Fabian

NRAD is located in a 3.5mx3.7m reactor room with a ceiling 5.1m high, at the east end of the Hot Fuel Examination Facility (HFEF) cask tunnel. Prior to placement of the reactor tank, the original floor and soil were excavated down to rock level and then backfilled with concrete to the depth of the original floor. The reactor tank fills most of the room, and is embedded in a massive, reinforced concrete block surrounded on three sides by reinforced concrete walls. The concrete serves both as a working platform on the top level of the reactor tank and as radiation shielding.

NRAD is equipped with two helium-filled beam tubes with separate radiography stations used to perform neutron radiography irradiation on small test components. Neutron radiographs can significantly reduce the time and cost for examining irradiated samples by allowing researchers to see inside samples to identify features or flaws that may require more study.

Typical applications for examining the internal features of fuel elements and assemblies include fuel pellet separations, fuel central-void formation, pellet cracking, evidence of fuel melting, and material integrity under normal and extreme conditions. Examination of the behaviour of large test loops and assemblies can also be performed.

The North beam station has been inactive for 20 years, Gholson said, and added that its return to service is NRAD's next big project. Currently samples tested at the East station have to be hand carried in cassettes or have to go through the hot cell. Samples that go in through the hot cell can almost never be returned to the owner for further off-site testing and 99% of them have to be disposed of as waste. Reopening the North station will allow irradiated and non-irradiated samples to access the beam line in casks, be put back into the casks after the radiographs are completed and returned to the owner.

NRAD began life as a flat-plate Triga reactor located at the Puerto Rico Nuclear Centre, where it operated from 1960-1968. In 1968, it was converted to a system that used 70% enriched uranium-235 fuel in four-element clusters, and operated until it was decommissioned in 1973.
In 1974, the former US Atomic Energy Commission, whose civilian nuclear activities were later folded into DOE, moved the Triga reactor fuel elements, control systems and a single radiography beam line to Argonne National Laboratory-West in Idaho Falls. Argonne-West, which later became part of INL, rebuilt the Puerto Rican Triga as the NRAD reactor, which achieved first criticality in October 1977 and became fully operational in 1978. A second radiography beam line was added in 1982.

"For the two- to five-year period before the shutdown, we were keeping NRAD running with bandaids and bubblegum,"

From 1976-2014, NRAD operated on the original control systems and control rod drive mechanisms, augmented by decommissioned parts from reactors at Pacific Northwest National Laboratories, the EBR-II experimental breeder reactor at INL, and the Zero Power Physics Reactor at INL.
By the time the system was shut down for the upgrade programme in January 2014, it was a constant struggle to keep the equipment running, systems engineer Andrew Smolinski told NEI. Operations were down to less than 10% of the reactor's theoretical availability. Many of components (including the CRDMs) were obsolete and spares were not available. For the two- to five-year period before the shutdown, "we were keeping NRAD running with bandaids and bubblegum," Smolinski said.

After the 11 September 2001 terrorist attacks on the USA, the US Global Threat Reduction Initiative's programme on Reduced Enrichment for Research and Test Reactors required conversion of all civilian research reactors from the use of highly enriched uranium (HEU) to low enriched uranium (LEU) fuel, with enrichment levels of less than 20% U-235.

Under this programme, INL completely defuelled the NRAD reactor core by 26 August 2009. Refuelling with LEU began on 17 September 2009. Startup for the fuel conversion began on 9 March 2010 and was completed on 7 June 2010. Because the core excess reactivity was lower than predicted and would not allow for extended operations, the NRAD reactor core was upgraded in 2013 to include four additional fuel elements and four additional graphite elements, bringing the total from 60 to 64.

At the time NRAD was converted to the use of LEU fuel, INL began planning to upgrade the reactor to extend its working life.Originally, the project was to have replaced the control system. However, as INL and contractor General Atomics reviewed the system, they determined that more extensive renovations would be needed to keep the reactor running efficiently.

The reactor was still running with its original analogue components from the 1960s shipped from Puerto Rico.

"The reactor was still running with its original analogue components from the 1960s shipped from Puerto Rico. "

General Atomics concluded that these components, including the control rod drives and nuclear instrumentation, needed to be replaced. An examination showed that the sliding shield over the pool had become contaminated and also needed replacement, Smolinski said.

Ultimately, INL ended up with an almost new reactor. The only things kept were the fuel, the tank, and a small amount of piping. The upgrade was essentially a life-extension for NRAD "that ensures we'll be able to sustain its capabilities for several more decades, with greater reliability and capacity", said Mark Henry, director of INL's material and fuels complex's post-irradiation examination facilities.

The upgrades also increased the availability of the reactor. NRAD went from seven shots per day "on a good day" before the upgrade to 130 radiographs in three work weeks, more than the entire output from the previous two years, Gholson said. Now, INL "could probably run NRAD 24/7 if it had enough qualified staff," he added, noting that NRAD currently only has two certified operators.

INL awarded General Atomics (GA) the contract to replace the reactor control system with a digital console in December 2009. The companies identified potential regulatory issues that required update and approval of a revised safety analysis report, and expanded the scope of the uprate.
General Atomics fabricated the console components, created the initial software, and redesigned the nuclear instrumentation modules while INL re-wrote the NRAD safety basis in 2012. In 2013, GA assembled the final console, conducted software and system testing for NQA-1, and conducted factory acceptance testing. The SAR update was approved in December 2013.

NRAD ran its final shots using the old analogue console on 7 January 2014. However it continues to use a physical analogue scram system.
In February 2014, work included implementation of the SAR; decoupling of the control rods; and installation of temporary nuclear instrumentation, level gauges in the reactor room, and conduit and cable pulls for the CRDM, field instrumentation and nuclear instrumentation wiring. In March, INL and General Atomics staff replaced the sliding shield, installed new CICs in the reactor tank, removed the old console and positioned the new console in the control room. In April, GA installed new wiring and connectors.

The new console was energized in May 2014, and staff began investigating noise issues and deficiencies in the grounds and wiring. The new CRDM was also tested and the console software was updated.

In November 2014, all nuclear instrument connectors had to be replaced due to noise issues. CRDM chatter was traced to ungrounded shields on the CRDM wires. In December 2014-January 2015, operators were trained on the new systems. All the nuclear instruments and the four data acquisition systems communicate through a central processing computer.

On 2 April 2015, the upgraded NRAD achieved first criticality for power calibration at approximately 100kW. Later in April, the fission chamber was found to be failing, and was replaced with a spare. Site acceptance testing continued through July 2015, and the final project turnover took place in August 2015.

Since August, INL has conducted more than 50 reactor runs, with no automatic scams of any kind during operation. Automatic startup is now standard practice.

NRAD has a "full house" of research projects through the end of the next fiscal year, Gholson said. Because NRAD's availability before the upgrade was so poor, some projects have been waiting for more than two years.

But he noted that NRAD is one cog in the wheel of INL's radiation programmes, working in cooperation with the Advanced Test Reactor and the multiple destructive and non-destructive testing options available in the Hot Fuel Examination Facility. 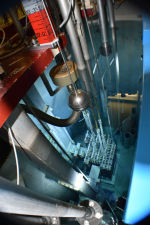 The neutron radiography reactor at INL