Power uprates up to 20 percent and sometimes even more, increase of the maximum batch average discharge burn-up from 40MWd/kgU to 55MWd/kg for BWR fuel assemblies and 60MWd/kgU for PWR fuel assemblies, lower neutron leakage fuel management with cycle lengths up to 24 months and challenging water chemistry conditions are some examples of increased customer requirements for fuel.

One determining parameter for BWR fuel assemblies' operational and safety margins is the linear heat generation rate (LHGR). The LHGR is calculated as the thermal power of a reactor divided by the accumulated (active) length of all fuel rods.

The LHGR decreases as the fuel rod arrays increase (see figure below, which ranges from a 8x8 up to a 11x11 array). However, when power plants are operated at 120% of their originally-rated power, the LHGR increases significantly. As can be seen, the gain of LHGR by a 10x10 array compared to a 9x9 array disappears if a reactor is operated at 120 percent of originally-rated power. This loss can be easily balanced by the implementation of a fuel assembly design featuring an 11x11 array.

While maintaining the same assembly power output, the ATRIUM™ fuel assembly design reduces LHGR by 20% compared with a 10x10 array. This increases:

These margins can be quantified. For instance, calculations have shown that ATRIUM™ 11 fuel will result in only about 50 percent of the maximum fuel rod pressure, if operated with the same fuel management as 10x10 fuel assemblies.

At a first glance, the introduction of a 11x11 array with a slightly reduced rod diameter (smaller fuel time constant) and a larger rod surface area (higher pressure loss due to friction) has an adverse effect on the thermal-hydraulic/nuclear stability of the core. However, in the case of the ATRIUM™ 11 these effects are compensated by the increased number of the part-length rods and a careful balance of their arrangement supported by a low pressure spacer grid design and upper tie plate.

In addition, the more balanced moderator-to-fuel distribution of the ATRIUM™ 11 results in a better fuel utilization. How large the gain is depends on different parameters such as the cycle length or the core lattice, but equilibrium cycle calculations showed that enrichment savings up to 0.2 w/o uranium-235 can indeed be achieved with the ATRIUM™ 11 fuel assembly.

The ATRIUM™ 11 also features the 3rd Generation FUELGUARD™ filter for debris retention. The small pitch between its curved plates and interstitial combs can definitively trap flexible wires with a diameter of 0.2mm and a length of 8mm. In addition, the fuel assembly features ULTRAFLOW™ spacers with integrated springs for robustness, and a fuel channel made of an iron- and chromium-rich alloy (Zry-BWR) for dimensional stability.

In pressurized water reactors, grid-to-rod fretting (GTRF) has been the most frequent cause of fuel failure worldwide. AREVA addressed that with its HTP™ fuel assembly design that features an eightfold line contact as the fuel rod support in the assembly's vaneless spacer grids. On the other hand, the thermal-hydraulic margins are significantly reduced when a power uprate is considered, especially in combination with a challenging low-leakage loading pattern, when shield assemblies are loaded at the periphery of the core as a cautionary measure against vessel embrittlement by fast neutron flux. Therefore, a fuel assembly design that remains robust against GTRF while providing additional thermal-hydraulic margins is required.

AREVA's actual PWR designs -- HTP™, with its unsurpassed robustness against fretting failures due to the line contact, and AFA 3G™, with its superior thermal-hydraulic performance due to mixing vanes -- provided the starting point of the GAIA spacer grid development. A GAIA spacer grid segment is shown above featuring a line contact for the fuel rod support similar to the HTP™ spacer grid and mixing vanes comparable to the ones of the AFA 3G™ spacer grid. Tests conducted in AREVA's PETER loop in Erlangen (Germany) confirmed the resistance of the GAIA design against fretting as known from the HTP™ design, and this with an improved thermal-hydraulic performance as demonstrated by DNB tests conducted in AREVA's thermal-hydraulic test loop KATHY in Karlstein (Germany). Buckling tests demonstrated that the GAIA spacer grid with the spring elements in the point of intersection of the spacer grid strips can withstand high seismic loading and provides an inherently safe buckling behaviour thanks to a full homogeneous deformation mode (see above). The GAIA spacer grid is a monometallic grid made of an advanced zirconium alloy like M5®.

Robustness is first of all required in the entrance area of a fuel assembly with its turbulent coolant flows. A new bottom nozzle -- called GRIP™ -- has been developed for the GAIA fuel assembly design. This component, fully machined from solid alloy, provides recesses for the fuel rod end plug. As a result, the upstream flow of the fuel rods is smoothed and the pressure loss of the fuel assembly is decreased, which has also a positive effect on the fuel assembly bow behaviour.

As an additional measure against fuel assembly bow, the GAIA fuel assemblies are equipped with thicker MONOBLOC™ guide thimbles made of a more creep-resistant material. This feature has been already successfully implemented in the I-variants of the AFA 3G™ and HTP™ fuel assembly designs.

Also, the GAIA fuel rod insures the high performance of the GAIA fuel assembly design. Chamfered pellets made of chromium doped fuel reduce the risk of chipping and increase margins regarding pellet cladding interaction which allows a more flexible plant operation. In addition, the chromium doped fuel provides more design margins at end of life conditions which is supported by a low volume fuel rod spring. Of course, also the very thin oxide layer thickness of the M5® cladding material, well-known for its outstanding corrosion resistance and the smaller pellet cladding gap contribute to the reduction of fission gas release. Moreover, the fuel cycle economy is improved thanks to the larger uranium mass gained by higher fuel density and the reduced gap between pellets and cladding.

AREVA has designed and manufactured fuel for BWRs and PWRs for 40 years following a continuous development strategy. However, at a certain point, it is necessary to take more significant steps in fuel designs in order to provide higher intrinsic safety margins. This is what AREVA has done with its two new fuel designs, ATRIUM™ 11 and GAIA. In 2012, first lead assemblies of both designs have respectively been loaded into a European BWR and PWR. Insertions of further lead assemblies are already planned for the coming years, demonstrating the strong interest of the utilities for these designs.

Velocity field just above the GRIP™ 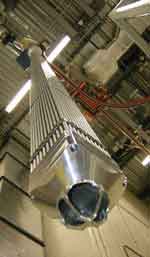 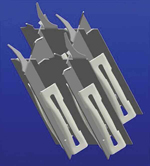