The 6th Eastern Economic Forum (EEF) held in Vladivostock in September saw a number of key agreements signed, which indicated a key role for nuclear energy in Russia’s plans for development of the Arctic and Far East 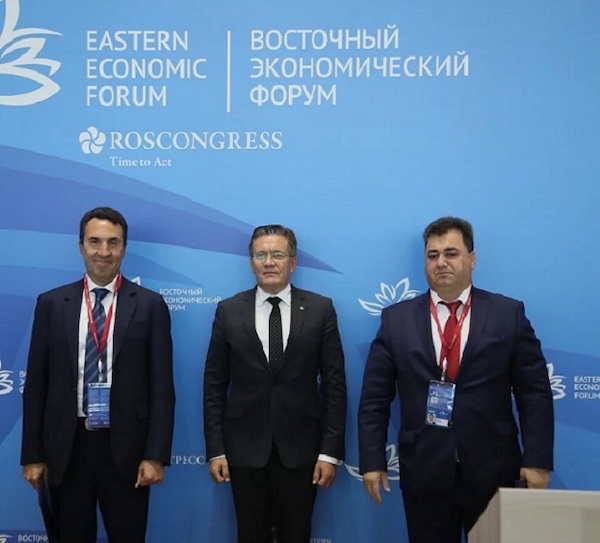 The 6th Eastern Economic Forum (EEF) held in Vladivostock in September saw a number of key agreements signed, which indicated a key role for nuclear energy in Russia’s plans for development of the Arctic and Far East.

The event, held in a mixed (online and offline) format, attracted more than 100 representatives of business and science from Russia, Japan, China, Norway, Finland, and the United Arab Emirates,who gathered at the Far Eastern Federal University.

On 3 September, a meeting of the Public Council of the Northern Sea Route (NSR) held within the EEF framework discussed development of the NSR as a new global route for international trade. Rosatom Director General Alexei Likhachev stressed the importance of the NSR and the need to structure work to develop Russian regions along the entire sea route between the western and eastern maritime borders of Russia. Navigation of the NSR depends heavily of the nuclear icebreaker fleet of Atomflot (part of Rosatom).

He noted: “We understand the Greater Northern Sea Route (GNSR) as a sea transport corridor that includes the territorial waters and the exclusive economic zone of the Russian Federation from the maritime state border with Norway in the Barents Sea to the maritime state border with the Democratic People's Republic of Korea in the east. This area also includes the NSR. To develop international transit, we plan to build two large high-tech container terminals in the west and east - in Murmansk and Vladivostok. For the effective development of the GNSR along its entire length, we will identify key points for export and coastal shipping, build new ports and terminals.”

The Head of the NSR Public Council and Chairman of the Board of Directors of Sovcomflot, Sergei Frank, noted that the importance of the NSR as an international transport corridor will grow. “Of course, the key factor in the reliable functioning of the NSR is the solution of the problem of ensuring year-round navigation in the entire water area of ??the NSR, including its eastern sector,” he said.

In his report, Vladimir Panov, Special Representative of Rosatom for the Development of the Arctic and Deputy Chairman of the State Commission for the Development of the Arctic, focused on the issues of infrastructure, ecology and safety of the GNSR. “Northern cargo traffic is actively growing, the goal has been set - 80 million tons of cargo turnover by the end of 2024. However… we believe that from 2025 a new stage in development of the NSR and GNSR will begin as a transport artery connecting Europe and Asia. According to our estimates, cargo turnover will reach 150 million tons in 2030,” he said. He noted that it is estimated that the increase in cargo traffic along the NSR will lead to a shortage of icebreakers in 2025-2030. “To eliminate the deficit, it is planned to build two more nuclear icebreakers under Project 22220 and four icebreakers using liquefied natural gas (LNG) as fuel,” he noted.

Rosatom and the Ministry for the Development of the Russian Far East and Arctic signed a cooperation agreement on 3 September for GNSR  development. The same day, Rosatom and the government of the Chukotka Autonomous Okrug signed a co-operation agreement to carry out joint actions to strengthen the social and infrastructural component of the region, including in Bilibino – the site of the ageing Bilibino NPP soon to be decommissioned -  and Pevek, where the floating NPP (FNPP) Akademik Lomonosov is moored providing power and heat to the town.

The agreement notes the willingness of the parties to consider joint participation in projects for NSR development, improving the quality of communication in the settlements of the region, their energy supply and general development. The document opens the way for Rosatom enterprises to invest in projects and priority regional programmes in the areas of scientific and technical, innovation and infrastructure development.

Also on 3 September, a cooperation agreement was signed between Atomenergomash (Rosatom’s mechanical engineering division) and Atomflot for joint implementation of infrastructure projects in the Arctic, including a project to supply power to the Baim ore zone using modernised FNPPs.

“There are a number of advantages of floating power units, such as high maneuverability when delivering power, the possibility of fixing the electricity tariff for a long period. These make this type of power plant a very promising product both in Russia and abroad,”  said Atomenergomash General Director Andrey Nikipelov. The General Director of Atomflot, Mustafa Kashka, welcomed the agreement, noting, “We anticipate further growth in demand in this segment in the Russian Federation and abroad. We hope for the joint implementation of several energy projects in the future.”

The Baimskaya ore zone is located in the Bilibino region of Chukotka and is the largest in the world in terms of reserves: its resources are estimated at 23 million tons of copper and 2 million kg of gold. There are 13 deposits on the territory of the ore zone. The construction of the Baimsky mining and processing plant (GOK) is planned, which will become the basis of a new industrial cluster. The GDK Baimskaya project (owned by KAZ Minerals) is expected to start production by the end of 2027. The annual ore processing capacity will be 70 million tons.

Atomflot and GDK Baimskaya also signed a preliminary agreement on the supply of electricity as part of the implementation of a comprehensive investment project plan for the development of the Baimskaya ore zone. Under the agreement, Rosatom will provide electricity to the project. Atomflot will supply four  modernised FNPPs with an installed capacity of at least 106MWe each. The first two are scheduled for commissioning in the area of ??Cape Nagleynyn by the beginning of 2027, the third by the beginning of 2028, and the fourth by the beginning 2031. The total investment in the energy supply project will amount to over RUB150 billion ($2m). The FNPPs will be moored at Cape Nagleynin. As part of the signed agreement, the parties confirmed their basic agreements on the price of electricity in the amount of RUB6 per kWh in 2020 prices (taking into account indexation) and consumption volumes.

General Director of FSUE Atomflot Mustafa Kashka noted: “The agreement with GDK Baimskaya is significant not only for the development of Atomflot, but also for the global market of transportable nuclear power plants of low power. The deal for such a volume of electricity was concluded on commercial terms and as part of a project for the development of minerals in a hard-to-reach region of the country. Atomflot, with its significant experience in operating the nuclear icebreaker fleet and low-power reactors, is a natural partner in such projects.”

Oleg Novachuk, GDK Baimskaya Board Chairman, said the agreement will make it is possible “to economically develop the largest Baimskoye field located in a remote area where there is no relevant infrastructure.” We are confident that in partnership with Atomflot, such a large project will be implemented efficiently, which ultimately will have a beneficial effect on the socio-economic development of the entire macroregion."

The previous day Rosatom said it will hold an international tender for the construction of two buildings for the Baimsky FNPPs. Vyacheslav Ruksha, Rosatom Deputy Director General and Director of the NSR Directorate, told reporters: “When we discussed the pace of construction of the first four floating power units based on our RITM 200 installation, our main customer Baimskoye indicated that it would need electricity in December 2026. However, of course, the capacity and technological features of the Baltic shipyard cannot handle all four vessels, so two will be announced in an international tender.” Ruksha was responding to a question from journalists about plans to place orders in China for construction. Ruksha noted that he plans to sign the main agreements by the end of September. "An agreement between Atomflot and the Baimsky GOK should be signed, and agreements between Atomoflot and our Energomashinostroitelny complex. The target is to have the first two vessels in Chaunskaya Bay by the autumn of 2026."

The forum also saw agreements signed for the development of nuclear power projects in Yakutia. On 3 September, an agreement was signed on the implementation of a carbon-free nuclear generation project between Rosatom, the Ministry for the Development of the Russian Far East and the Republic of Sakha (Yakutia).

The parties will consider the possibility of using the concession model (with the support from VEB.RF subsidiary VEB Infrastructure) for the implementation of a project for the construction in Yakutia of a low-power NPP based on the RITM-200N reactor. The construction of the NPP will make it possible to overcome the main infrastructural limitations of launching promising commercial projects in the North Yakutsk Arctic zone and will ensure the stability of energy supply and prices for electricity. The plant's electrical capacity will be at least 55MW, and the service life of irreplaceable equipment will be up to 60 years.

The document provides for the joint development of a plan for the integrated socio-economic development of the Arctic territories of the Republic of Sakha including modernisation of the energy infrastructure, the provision of energy to the maximum number of consumers, and the improvement of the transport and social infrastructure of the Ust-Kuyga village and Ust-Yansky ulus (district).

"The choice of a concession is optimal for the speedy implementation of the project for the construction of NPPs,” said Russia’s Minister for the Development of the Far East and the Arctic, Alexey Chekunkov. “The creation of a reliable and environmentally friendly source of energy in Yakutia is extremely important for the socio-economic development of the region, and will also attract new investors to the region and improve the quality of life of the population," he added.

The head of the Republic of Sakha, Aisen Nikolaev, noted that Rosatom’s projects are of great importance for the socio-economic development of the North-East of the republic and the Arctic. “We are not just replacing outdated coal and diesel energy sources with modern and safe technologies. We associate with this project the beginning of positive transformations in the village of Ust-Kuyga and the Ust-Yansky region, and with it in the entire Yakut Arctic. The station will breathe new life into all those projects that are there, both in tin, and in gold, and in silver, and in general will make the region a very developed area, comfortable for work and life,” he said.

Another co-operation agreement was signed between Atomenergomash and Globaltek for the possible joint implementation of a project for energy supply using FNPPs for a complex for the production, storage and shipment of LNG and gas condensate.  Globaltek will develop gas condensate fields in the existing licence areas - Srednevilyuisky, Mastakhsky, Tolonsky and Tymtaidakhsky, the goal of which is to increase production from 1.7 billion to over 25 billion cubic metres This will meet the needs of the region and an LNG plant with a capacity of 18 million tons is planned to be built on the shore or in the water area of the Sea of Okhotsk. Together, Atomenergomash and Globaltek will also study the development and implementation of a “Gas complex based on a FNPP for the production of LNG” for the Russian and foreign markets. 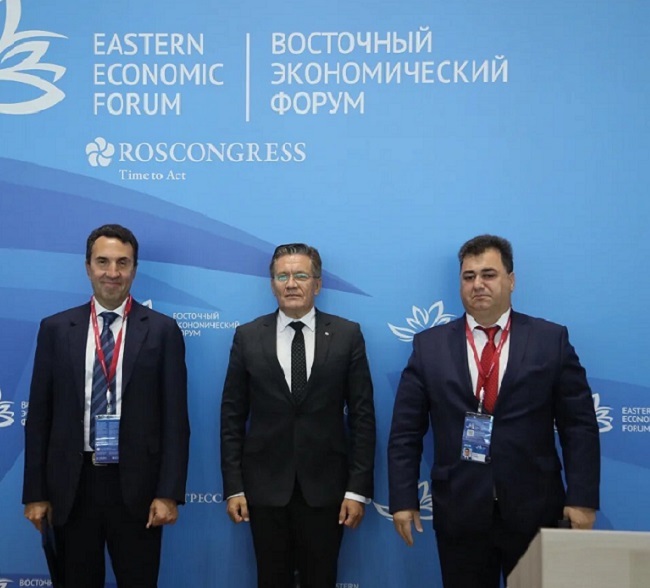 Rosatom is planning to build a small nuclear power plant in the Arctic region of Yakutia (Credit: Rosatom)

Bilibino city in the region of Chukotka